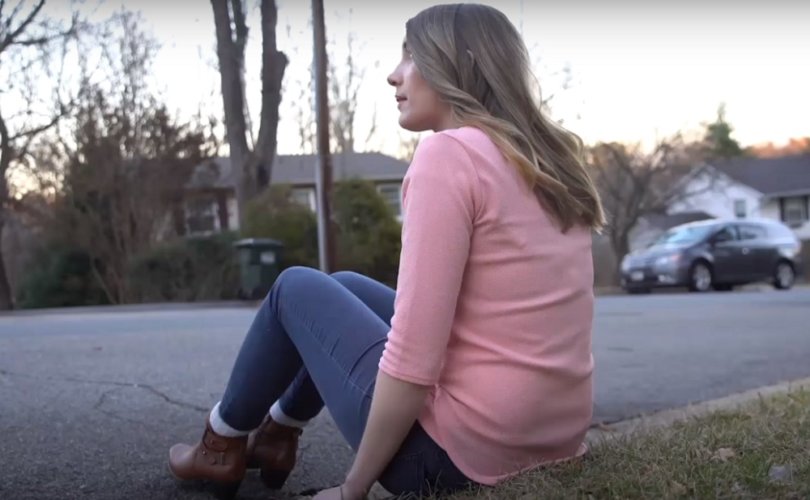 April 11, 2018 (The Daily Signal) – Kelly Clemente found out she was pregnant when she was 18. She had just finished her first semester of college, and up until then, described herself as your typical “all-American girl.”

She got good grades, was a member of a sorority, and ran on the track team.

When she saw that pregnancy test, “My life is over,” she thought.

“I was like, it doesn't even matter. Nothing matters anymore,” Kelly told The Daily Signal.

Although she shared compassion for them, Kelly had bought into the stigmas about birth moms. “I'll never be one of those women,” she thought.

But she was wrong. At 18, Kelly became an unplanned pregnancy statistic. “I was no better than these women that I was creating baskets for,” she said.

After crying and feeling nothing but noise and chaos, Kelly thought of her little sister, who her parents had adopted into their family from Central America.

“I thought of the joy she brought into our family, and for the first moment after hours of crying, I felt calm, and I felt peaceful,” Kelly said. “I knew that I needed to make the decision that my sister's birth mom had made.”

Kelly would carry her baby to term, and place him – or her – for adoption.

But first, she'd have to tell her parents.

Within days upon learning she was pregnant, Kelly had to figure out how to come clean with her parents. “I expected them to be angry,” she said. “Parents' worst nightmare, right?”

First, she called her mom from school to say she wasn't feeling well.

“I was concerned enough to go to school to see firsthand what was going on,” Susan Clemente, Kelly's mom, said.

The two went grocery shopping together, but Kelly avoided sharing the news. Sensing something was wrong, her mom invited Kelly to come back home.

“That entire ride home, I never once told you that I was pregnant,” Kelly said, speaking to her mom about that day. “You told me later that you just knew.”

When they got home, they sat on the living room couch and talked so intently that the sun went down without anyone noticing. When her dad, Mark, arrived home from work, he asked, “Why are you all sitting in the dark?”

At that moment, Kelly had to confront one of her biggest fears – telling her dad she was pregnant.

“I could tell something was going on,” he said of the two sitting in the dark.

Almost in the same breath, Kelly broke the news that she was pregnant – and going to place the child for adoption.

Instead of responding with anger or disappointment, Mark told The Daily Signal, “I just remember being so grateful and proud.”

“We'd hoped that we had raised you that way,” her dad said, speaking to Kelly. “So the fact that you didn't even entertain that thought [abortion], to be honest, it was a very proud moment.”

After that, Kelly moved back in with her parents and set up an appointment with Bethany Christian Services, an organization that facilitates private, faith-based adoptions.

Walking into Bethany Christian Services, Kelly was expecting “the wrath of God” to be on her.

“They showed me what it was like to walk with someone through the hardest time of their life when they are feeling so down on themselves and so alone, they were there.”

Shawn and Dave Hansen were the second couple Kelly and her mom met with in the adoption process.

“It was so obvious that these were the people that would have her little treasure,” her mom told The Daily Signal.

But finding them was the easy part. Kelly was 18, in college, and still pregnant.

“Being pregnant and being in college is never really a great thing,” Kelly said. “I found out very quickly who my true friends were.”

At one point, she told a friend on her track team that she was pregnant and placing her child for adoption. His response was less than supportive.

“If you don't get an abortion, I will lose all respect for you,” Kelly remembered him saying.

“I was horrified,” Kelly said. “You call yourself pro-choice, but where's my choice? It's my choice to choose adoption.”

Then, two weeks before the birth, Kelly got a phone call from the baby's father's best friend informing her the father – Kelly's boyfriend at the time – wasn't being faithful.

Hearing that news was the second hardest news to take over those nine months, Kelly said. Her entire identity had already been shattered, and her relationship now was, too.

At a low point, Kelly walked out to her parents' driveway in the middle of the night. She lay down on the road, in the dark, and prayed that a car would come run her over.

“I want to die,” Kelly remembered thinking. “I can't handle this. This is too much for me.”

At that moment, Kelly said she heard a voice from God telling her to get up. So she did.

“I got up, and I said, 'OK, I know that this sweet baby did nothing wrong, so I don't want him to get hurt, so I'm going to have this baby and then I'm going to take my life.' Because I was so broken, I didn't think there was any meaning left.”

But then the voice came back and said, “No, I'm not done with you yet.”

“At that moment, I knew that I was loved by a really big God who had a really big heart, that didn't judge me by my pregnancy and still loved me so much,” Kelly said.

A few weeks later, her water broke, and Kelly gave birth to a healthy baby boy.

'An Answer to My Prayers'

“Those three days I spent in the hospital, he was mine,” Kelly said of her birth son, Alex. But after those three days, it was time to place Alex with his adoptive parents, Shawn and Dave Hansen.

She then walked to the hospital chapel, said a prayer for everything to be OK, and at that moment, Dave and Shawn walked in.

“I was like, wow,” Kelly said. “They truly are an answer to my prayers.”

Handing her baby to another family wasn't going to be easy, even though the family was the living embodiment of her prayers.

“I thought the hardest day of my life would be finding out that I was pregnant,” Kelly said. “It wasn't.”

“The hardest day of my life was driving away from that hospital without a baby. I had never felt more empty in my life. I was physically empty, and I felt so alone.”

Kelly made a decision that in today's society, few women do.

In 2014, the latest data available, 18,329 women in the U.S. chose to place their children for adoption. That same year, more than 900,000 women chose abortion. According to the National Council for Adoption, a nonpartisan group that advocates adoption, for every 1,000 abortions and births to unmarried women, there were only 6.9 adoptions.

Kelly gave birth in September 2008, and returned to college in January. Much like the pregnancy, the transition back wasn't easy.

“I remember everybody just telling me over and over again, 'It's over now. It's over. Aren't you so glad that this is over?'” Kelly said.

But she felt differently.

“I was fine without drinking, I was fine without sleeping around. I had lived a life I was proud of while I was pregnant, and I wanted that to continue but I was feeling so much pressure to just be that fun sorority party girl that I was before my entire life changed. No one seemed to wrap their head around the fact that my entire worldview had been shifted.”

Today, Kelly is 28 years old. She graduated from college and went back to receive a master's degree in school counseling.

“My heart is for children,” Kelly said. For now, she's teaching preschool and hopes one day to be either a school counselor or a voice for teen moms and teen birth moms.

“I want them to know that they have value and their life isn't over. They have their whole life ahead of them.”

She also wants birth moms to know that children placed with adoptive families “are not lacking in love.”

Kelly chose to have an open adoption with Alex and his parents, and sees him a couple times every year.

After enjoying time together, Kelly said, “You would think that it would be this emotional thing where I'm so upset that my birth son is going back with his adoptive parents.”

“It's not,” she said. “It's this beautiful thing where he's happy that he's seen me, I'm happy that I've seen him. He knows who is parents are. He knows that I'm not mom. One day I hope to be a mom, but I'm not his mom. I get to be birth mommy. And that's OK with me.”