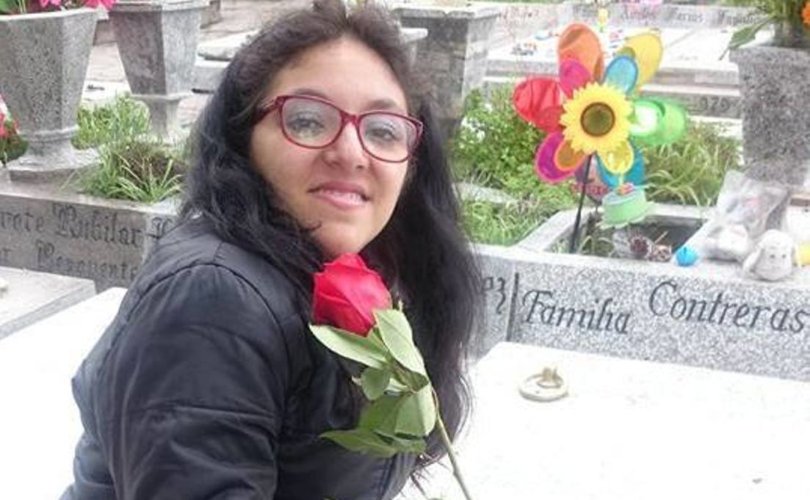 Diana Valeria Contreras lost two babies to miscarriage, one who was conceived in rape when she was 15.

I cried a lot and I was broken-hearted because there was another person living inside me and I didn’t have the right to do much more than protect him or her. I tried to prepare myself mentally to understand what no one ever explains to you.

After three months, I miscarried the baby. Later that same year, I attempted to take my own life. Someone ended up bringing me to the hospital where I was finally treated for my depression. I was suffering because it was horrible that the people who knew about my situation said that my miscarriage was a good thing. They told me: “At least, you won't see the baby's face.”

The years passed by, I met a man who I fell in love with, and in 2014, I became pregnant with my second child. But seven months into the pregnancy, my baby's heart stopped beating. When I got to the hospital, the doctor told my mother about my first child, and, on top of that, the medical staff treated me rudely because they thought I had been negligent in order to miscarry at seven months.

I felt completely isolated as I gave birth because the medical staff wouldn't let anyone else into the room, and they immediately took my son away as if his life didn't mean anything. I was left alone as I experienced a let down of colostrum — the initial breast milk meant for the baby. Eventually, I was able to see my son, Gabriel, under horrific circumstances — inside a jar.

I was deeply scarred, so hurt and unable to cope that I was fired from my job. And then God began to work on the conversion of my heart, having experienced so much tragedy.

Having been raped at 15, becoming pregnant from such a horrible act, and then spontaneously losing that child — my child, I felt abandoned by God despite knowing that He, in some form, had protected me when I attempted to take my life.

After I was raped, I had felt so worthless and ended up devaluing myself by allowing myself to be exploited, being prostituted. I didn't care what happened to me anymore. My body experienced a tremendous amount of chaos and there were no resources in my home to cope.

I dressed in black and got a tattoo of an enormous dragon on my back because I wanted to document my pain, my anger. I had just seen the movie Millennium, and I could very much relate to feeling like I was in a strange paradox. I didn't know how to express my feelings outwardly, so I got the dragon tattooed on my back as a statement.

When my son Gabriel died, I asked God, “Why do you let these types of things happen?” One day, I knelt down and told God, “Give me a reason to understand all this because I need a reason to stay in this world.”

One day, a mom came up to me and asked for my help. Given her situation, her need for assistance, and my opportunity to help her, I suddenly realized that everything — absolutely everything — has a purpose. That's when I finally handed God my pain.

I started going to church and reading the Bible. A group of Christian students helped me a lot. I knew there were a lot of people who had suffered the way I had, and I didn't want them to feel worthless. I left behind my black clothes and the meaning behind my tattooed dragon. I told God, “You can't give me back my children, my virginity or the youth that I lost, but you can tell me how to help others.”

I started by forgiving. I forgave myself for despising myself. After that, I did the difficult task of forgiving all the people who had hurt me: the doctors, the nurses, and my rapist. However, with forgiveness, I reached peace.

Today, I use that pain, which is nostalgic, to fuel my passion to help others. If I'm standing up today, it is thanks to God's mercy. I learned that even the saddest things in this world have a purpose. God is capable of taking your biggest hurt, your broken heart and returning to you the will to live. He rewards you for every trial He allows you to go through.

Presently, I'm single and fighting for the lives of the unborn in memory of my children, in memory of my own pain, because what we need the most is support to keep going forward without having to kill anybody.

Diana Valeria Contreras is the president of Foundacion Angel de Luz (Angel of Life Foundation), an association that supports and defends the identities and lives of unborn children who have died. She is also a pro-life blogger for Save The 1, with her story having been originally written in Spanish for our blog Salvar El 1, and translated by our Spanish-speaking editors.