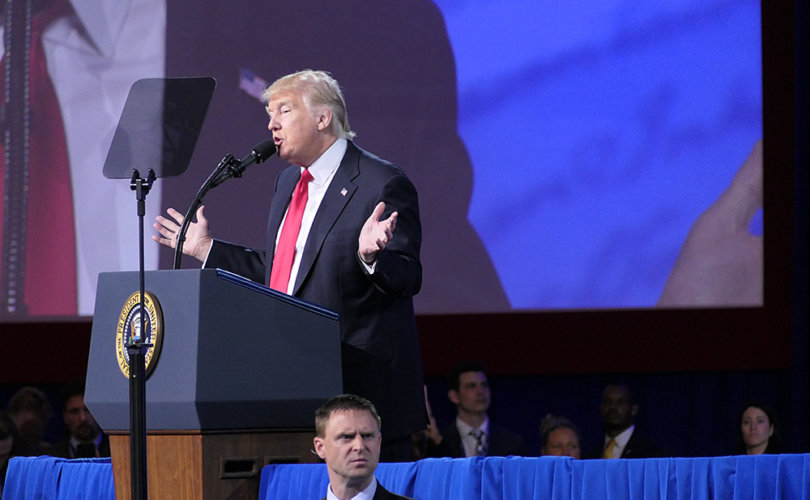 February 27, 2017 (Stream.org) — When I learned that President Trump had apparently changed his mind on protecting religious business owners and schools from government harassment and legal persecution, I’ll admit that I was angry. As Maggie Gallagher explained, with a stroke of his pen, Trump could reverse executive orders and policies made by Barack Obama, who knew that there weren’t the votes in Congress to add “sexual orientation” or “gender identity” to the Civil Rights Act of 1964.

So Obama declared that the federal government would henceforth play make believe, and act as if religious objections to homosexuality, and rational insistence that there are just two human sexes, were covered in the original law. (Which was passed back when sodomy was still in crime in most of those legislators’ states, when what happens in “sex change” operations was still called “castration.”) I guess Obama had seen the Supreme Court cram contemporary mores between the lines of the Constitution often enough, that he wanted to get in on the act when it came to federal law. This legal hijacking law is so blatant, you almost have to admire Obama’s chutzpah. It’s as if he dressed up Rev. Martin Luther King in drag like Tyler Perry, and got away with it.

Rumors suggest that it was Trump’s daughter Ivanka and son in law Jared Kushner who convinced him to go back on his promise to conservative Christians. I wondered why orthodox Jews would favor distortions of the law that could harm their co-religionists — who also follow the Hebrew Bible on this point. Then I remembered all those Biden-sniffing Jesuits at Georgetown, and felt a sickly kind of peace. “Everyone is insane,” I reflected.

Was Ivanka worried about all the “fabulous”parties she would be disinvited from back in Manhattan, if her father stuck up for Christians? She needn’t worry. Those hostesses are already furious at her, afraid that her father will deport their illegal nannies. What the Trumps need to realize is that they will be treated as pariahs for simple, sane policies like enforcing our country’s  borders and laws. They might as well go ahead and protect religious freedom too.

Let me try to break it down another way.

Coming from New York City, you might not realize this, but gays make up a whole 2 percent of the electorate. For all you did to win them over, with Peter Thiel’s speech at the Convention and your waving the rainbow flag, what percentage of that 2 percent do you think voted for you — or would vote for you in four years in the blue states where most of them live? Sure they have a lot of money. Do you think they were contributing it to you?

Now maybe you’re worried not about gay voters per se, but straight voters who watched Will & Grace for long enough that now they have pro-gay attitudes. There are a lot of people like that, especially women. How many of them do you think want to persecute Christian florists and bakers, close down wedding chapels and Catholic schools? Not many. You could sell that pro-religious freedom executive order as standing up for the little guy against tort-hungry lawyers using big government to persecute religious Americans — because that is, in fact, exactly what it is.

But these are heady arguments. So let me reach for the heartstrings. I will pull out the big guns here, and explain why you should sign the executive order protecting religious Americans using a Frank Sinatra song:

Trump let Christians see
What a straight shooter you can be.
I know how you treated your creditors in the 80s.
Trump shoot straight with me.

A leader never scams his voters.
It isn’t fair, it isn’t nice.
A leader doesn’t fawn on the snowflakes and snobs.
Or blow on his enemies’ dice.

Let’s keep the Party far-right,
And ruin Meryl Streep’s night.
Stick with the Deplorables who put you in the White House
Trump be a leader, and fight!

This article was originally published Feb. 17 on Stream.org and is re-published with permission.

DeVos is not as conservative on social issues as you think

Trump: ‘My judges will be pro-life,’ but gay marriage is ‘settled law’