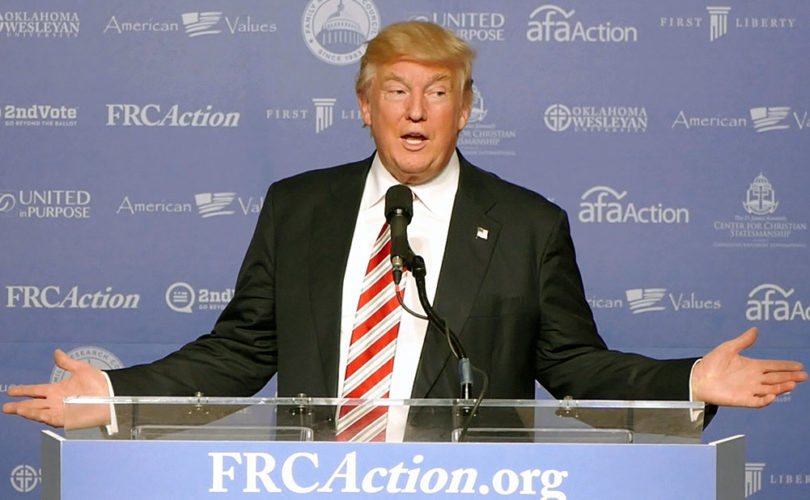 October 1, 2019 (American Thinker) — According to the latest presidential opinion polls, the 2020 presidential election is over. Newsweek is giddy, having reported, “The latest Fox News poll about the 2020 election shows President Donald Trump losing to every Democratic frontrunner including Joe Biden, Bernie Sanders and Elizabeth Warren.”

Propaganda, used extensively in the past by communists and Nazis, is information put out by governments, or their media allies, to push an agenda and influence people rather than to inform them. Much of mainstream journalism today falls into the category of propaganda, with the media presenting only part of a story, or fabricating news entirely, in order to further their political agendas.

The Fox News poll noted above was not actually conducted by Fox, but instead commissioned to Beacon Research and Shaw and Company Research. Calling it a “Fox News Poll” is part of the propaganda, meaning that if Trump's favorite news network thinks his electoral prospects are nil, then it must be really bad for Trump and his supporters.

This poll was based on about 1,000 random registered voters. Note that 120 million–plus voted in the last election. And only about half of registered voters actually vote. Newsweek reports, “Biden had a double-digit lead on Trump” as the most popular Democrat in the field. Bernie Sanders, at number two, beats Trump by eight points. Third-place Elizabeth Warren defeats Trump by six points in the hypothetical matchups.

Yet the same survey asked, “Do you think Donald Trump will be re-elected president in 2020, or not?” By a 46-40 margin, those surveyed answered yes. Despite their preference for anyone but Trump, a plurality believe that Trump will be re-elected easily. I'm surprised the survey didn't ask if respondents believed that Russia would hack the election again and hand it to Trump, as many Democrats and CNN anchors still believe happened in 2016.

Surveys are as good as their samples. Ask who is preferred for president at a Trump rally or a Code Pink rally, and the results will be diametrically different. A fair survey of American voters' political preferences should reflect the approximately equal split in political affiliation of voters between the two major parties as reflected in the last election. How well did this Fox poll select a representative sample?

The political identification of those surveyed was heavily weighted toward Democrats by 49-39 percent, a ten-point difference. All of a sudden, the poll's 14-point lead for Biden over Trump is down to 4 points, within the margin of error, assuming also that Biden can “misremember” his way through the rest of the campaign.

This poll is not alone in the propaganda parade. A recent Quinnipiac poll trumpeted, “Every major 2020 Democrat beats Trump by at least 9 points in new poll.” Game, set, match. Trump might as well report to prison now, so Reps. Adam Schiff and Jerry Nadler don't have to bother with additional congressional hearings, impeachment, indictments, and maybe even drawing and quartering Trump and his family.

Far-left Vanity Fair proclaims, “Trump is losing his mind over another bad Fox News poll.” Really? Watch any Trump rally or his famous “chopper pressers” before boarding Marine One, and see if he is losing his mind. Instead, listen to some of the silly media questions and realize that they are the ones going insane.

Are there contrary polls out there? Look at Rasmussen Reports, the most accurate pollster in the 2016 election. In its daily presidential tracking poll on September 23, Trump had a 52-percent total approval percentage, compared to only 46 percent for President Obama at the exact same point in his presidency.

Obama easily won re-election despite being 6 points less popular than Trump at the same point in their respective presidencies.

Some pollsters believe that “Rasmussen has a pro-GOP bias.” Perhaps this is because Rasmussen wasn't part of the gaggle of pollsters predicting a Hillary Clinton landslide victory. To appease these critics, let's look at another poll: Gallup.

Gallup's Presidential Job Approval Center, similar to Rasmussen, allows comparisons of different presidents at comparable points during their presidential terms. President Obama began his administration with a much higher job approval rating compared to President Trump, perhaps because he was “the one we have been waiting for,” lowering sea levels and winning a Nobel Peace Prize for simply showing up.

A funny thing happened over time. Obama gave us his namesake takeover of healthcare, while Trump gave us an economic boom with record low unemployment. Notice how the lines drew closer and eventually converged. The latest comparative snapshot, noted below, shows Trump with a 43-percent job approval rating compared to Obama at only 40 percent, confirming the Rasmussen results.

For another take, forget the pollsters and follow the money. PredictIt, the stock market for politics, predicts Trump as the 2020 winner at 42 percent, compared to Warren at 30 percent, Biden at 16 percent, Yang at 9 percent, and Sanders trailing the field at 7 percent. Didn't the Fox poll say Biden was the Trump-slayer by double digits?

In 2016, on the evening of Election Day at 10:20 P.M. EST, when most voting across the country was completed, one of the top propagandists, the New York Times, was still determined to push its agenda and perhaps keep a few western state Republicans from voting before their precincts closed. Ignoring reality, the N.Y. Times still claimed that Hillary Clinton had an 85-percent chance of winning an election she had already lost.

Just keep in mind that when you see the Democrat media proclaiming, “Trump is trying to discredit recent polls because he's losing in nearly all of them,” Trump is simply pointing out the obvious: that these polls are neither legitimate nor accurate and instead are simply political propaganda.

Brian C Joondeph, M.D. is a Denver-based physician, freelance writer, and occasional radio talk show host whose pieces have appeared in American Thinker, the Daily Caller, and other publications. Follow him on Facebook, LinkedIn, Twitter, and QuodVerum.