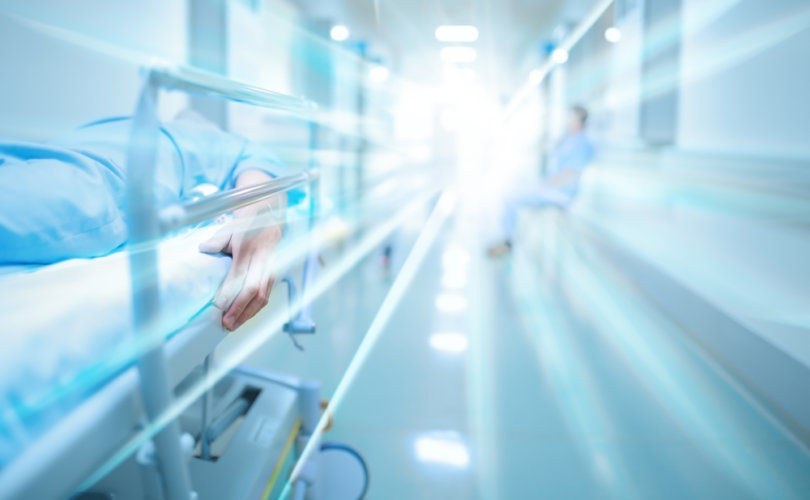 April 6, 2020 (LifeSiteNews) – It was mid-afternoon last week when a phone rang in an American Catholic rectory. A priest picked up.

“Father?” a voice asked with hesitation.

“We’d like your help. Our father is in the hospital. He’s elderly and we’ve been told he’s dying.”

“Will you anoint him?”

“Let me see what I can do,” the priest replied.

Momentarily shaken, if not, admittedly, spiritually weakened, the priest called the hospital. He listened as administrators explained in detail the extra safety measures that must be followed during the pandemic. The proper usage of Personal Protective Equipment (PPE) was explained. The priest agreed to oblige all protocol. The deck was cleared.

But he had to clear his head.

“All of a sudden, there was a lot of tension in my heart. What to do right then did not come easily; I wish I could say it did,” the priest said in an interview on Palm Sunday morning. “But what I kept coming back to was unsophisticated: this is my role as a priest.”

The Ritual for the Anointing states, “The Lord Himself showed great concern for the bodily and spiritual welfare of the sick and commanded his followers to do likewise.” (Ritual #5)

“It’s funny, the other thing that helped me decide was the freedom of celibacy. I have no one to endanger except the Lord, and you can’t pass on the virus to Him,” the priest said.

“I’m just a simple priest and a sinner. I’m no hero. I just knew as a priest that this suffering man needed the sacrament of anointing. I just wanted to do what God wanted and I knew God just wanted me to do my job.”

Continues the Ritual: “Those who are seriously ill need the special help of God’s grace in this time of anxiety, lest they be broken in spirit and, under the pressure of temptation, perhaps weakened in their faith.” (Ritual #5).

The priest walked into the hospital room at nightfall with a small kit, wearing his PPE gear. The gentlemen who lay before him was unresponsive. It was quiet as he began to anoint the man.

“It got very emotional in there; what I was doing, the anointing, became very real,” he said. “It’s hard to describe what happened in that room, but I can say it felt like I was helping this suffering man to prepare for death and to meet the Lord, giving him the spiritual nourishment he needed that night.”

Continues the Ritual: “This sacrament gives the grace of the Holy Spirit to those who are sick: by this grace the whole person is helped and saved, sustained by trust in God, and strengthened against the temptations of the Evil One and against anxiety over death. Thus the sick person is able not only to bear suffering bravely, but also to fight against it.“ (Ritual #6).

The man died two days later. “It brought great comfort and closure to the family,” the priest said. “After the anointing, he was in the Lord’s hands.”

The priest moved out of his rectory and lives temporarily in isolation. He said he’d like to volunteer to travel to hospitals throughout his diocese to anoint those with the virus and believes each diocese would be wise to select a team of priests to serve in only this capacity.

Due to what bishops cite as safety and health concerns, Masses and churches throughout America have been shuttered. In many dioceses, the Sacrament of Reconciliation has also been suspended.

According to the Catechism of the Catholic Church, “The first grace of this sacrament is one of strengthening, peace and courage to overcome the difficulties that go with the condition of serious illness or the frailty of old age. This grace is a gift of the Holy Spirit, who renews trust and faith in God and strengthens against the temptations of the evil one, the temptation to discouragement and anguish in the face of death.”

Priests from throughout the country have experienced frustration in gaining entrance into hospitals to anoint the sick, hear confessions and administer Viaticum (reception of the Eucharist before death).

Last week, a priest who was in the middle of granting an elderly woman an Apostolic Pardon (an indulgence given for the remission of temporal punishment due to sin) was removed by security. Nurses stationed across from the ailing woman's room confronted the priest.

“I blessed the nurses and smiled as I walked by, and they immediately tried to stop me from entering,” the priest said during an interview. “I explained that I was administering pastoral care on behalf of the woman’s family. And they said, ‘It doesn’t matter. I don’t know why anyone let you in.’”

The priest pleaded his case, but nurses persisted that he immediately leave the premises. One called security. Aware he’d soon be escorted from the hospital, the priest began to grant the Apostolic Pardon.

“I was three feet away from the poor woman, standing outside the curtain to her room,” the priest said. “And that’s when I was removed. As a priest in that situation, I am responsible for that woman’s soul. I knew if I pulled that curtain and walked in, that I would have gone to jail. I had a Mass to celebrate later that day. If it was at another time or circumstance, I have to think that I would have been in jail that night.”

“A few years ago there was talk about medical death panels. Now all of a sudden, in the world we live in today, it seems there’s a brand new thing; eternal death panels,” he commented.

After being escorted from the hospital, the priest called diocesan officials to help him to regain entrance, but was told that his diocese had to follow the hospital’s protocol.

“I’m embarrassed that our shepherds aren’t doing everything they possibly can to help priests administer the sacraments. It’s startling, but it seems we’ve submitted and bought into the secular zeitgeist – administering the sacraments to the dying is no longer essential,” he said.

“We used to charge in as priests; now, I guess, we fall back. I find it sad. It is disillusioning to priests. Throughout history, during times of war, plagues and epidemics – the Church Militant and Church Triumphant, they showed us the way. They cared more about tending to eternal fates and the soul than the potential loss of their own body.”

A Maryland priest was told to “stand down” on Palm Sunday morning when offering to tend to a victim/s involved in a serious road accident. When the priest, robed in his cassock, asked a police officer if he could tend to the victim/s, he was aggressively rebuffed and told to return to his truck.

“The secular world often doesn’t respect the role or importance of the priest, but we priests need to accomplish our mission,” the priest said in an interview. “As it relates to the anointing of the sick, the reason for the Sacrament is two-fold: bodily and spiritual healing. The bodily healing from illness is not uncommon in the reception of this sacrament. Twice, I’ve anointed people with pancreatic cancer who were immediately cured. The cure was discovered after the fact by their doctors.”

“Priests, in Persona Christi [in the person of Christ], need to be with the suffering during those moments when souls may soon meet Our Lord,” he added.