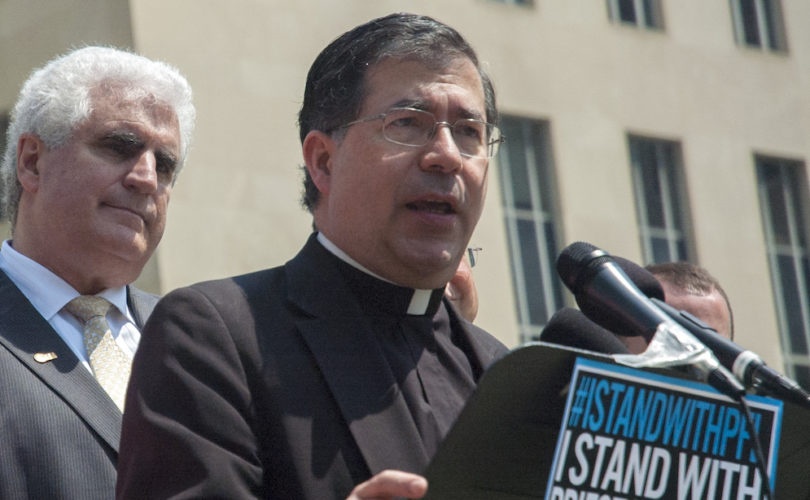 Priest for Life's Father Frank Pavone speaks at the Rally for Religious Freedom held in front of the U.S. Court of Appeals for the D.C. Circuit on May 8, 2014.American Life League

February 4, 2020 (LifeSiteNews) — St. John Paul II wrote that when a state legalizes abortion, “[a]t that point, everything is negotiable, everything is open to bargaining[.] … The State is no longer the ‘common home’ where all can live together on the basis of principles of fundamental equality, but is transformed into a tyrant State[.] … [W]hat we have here is only the tragic caricature of legality[.] … [T]he disintegration of the State itself has already begun[.] … This is the death of true freedom”  (Evangelium Vitae 20).

These words from the Pope of Life, written in 1995, directly relate to a battle brewing in the Kansas Legislature today.

I stood by then-governor Sam Brownback in 2015 when he became the first governor to sign a law protecting children from dismemberment abortions. Abortion advocates challenged it in court. Then, in April 2019, the Kansas Supreme Court decided that the state constitution guarantees women the fundamental right to have an abortion.

The court concluded Section 1 of the Kansas Constitution Bill of Rights, which states that “all men are possessed of equal and inalienable natural rights, among which are life, liberty, and the pursuit of happiness,’”protects a woman’s right to decide whether to continue a pregnancy.

It’s hard to imagine a more fundamental and mind-numbing contradiction than what we see in that opinion. The very assertion of the right to life implies the right to take life?

As St. John Paul predicted, Kansas — at least according to its Supreme Court — has now embraced a “tragic caricature of legality.” Sure, a court can say abortion is a right, but it has no authority to make it a right.

The danger of this reading of the constitution is that it could be used to negate every law that now protects the unborn. That would be a tragedy, because as of now, Kansas is one of the safest places for the unborn to complete their incredible journey, with laws protecting pain-capable babies from abortion and prohibiting partial-birth abortion; informed consent laws that call for a mother to be told the medical risks of abortion and medically accurate facts about her baby; a 24-hour waiting period before abortion; an ultrasound law and a law to protect babies from sex-selection abortion; a law requiring both parents to consent to a minor daughter’s abortion; a ban on telemed abortions, in which an abortionist never physically examines the mother; bans on Title X funding to abortion providers and taxpayer funding for abortion unless a mother’s life is endangered; and a fetal homicide law that defines the unborn at any gestational age as a “person” and a “human being” (except when the child is aborted).

All these laws could be wiped off the books if the Supreme Court ruling recognizing a fundamental right to abortion in the state constitution is allowed to stand.

Thankfully, those who understand the nature of this battle are fighting back.

On Jan. 29, the Republican-controlled Kansas Senate voted 28-12 in favor of advancing a constitutional amendment that would reverse the high court’s ruling by giving state lawmakers the power to regulate abortion.

As some news outlets noted in their reporting on the hours-long session that preceded the Senate vote, this amendment was advanced on the state’s 159th birthday.

Before their state turns 160, Kansas residents could play a role in deciding what kind of state it will be going forward: one that protects the most vulnerable or, in the words of John Paul II, a tyrant state.

The next step for the amendment is a vote in the House, where it requires a two-thirds majority, or 84 votes. As it happens, there are 84 Republicans in the House. Observers note that not all of them can be counted on to vote correctly, but some Democrats might cross the aisle and vote for life.

If 84 members of the House vote in the affirmative, voters in Kansas will be asked to decide on the amendment during the primary elections in August.

Thankfully, the governor has no say in whether or not the amendment is added to the constitution. But Gov. Laura Kelly did have plenty to say about the possibility.

In an interview with the Associated Press, she said the state would be sent back to the “Dark Ages.”

The proposed amendment, she said, attacks “fundamental American freedoms that should never be subject to a vote. They are foundational to who we are as a state and as a nation. I fear for a future in which the Legislature chooses to stand between a woman and her doctor. This would throw the state back into the Dark Ages.”

Would that Gov. Kelly and John Paul II could sit down for a conversation!