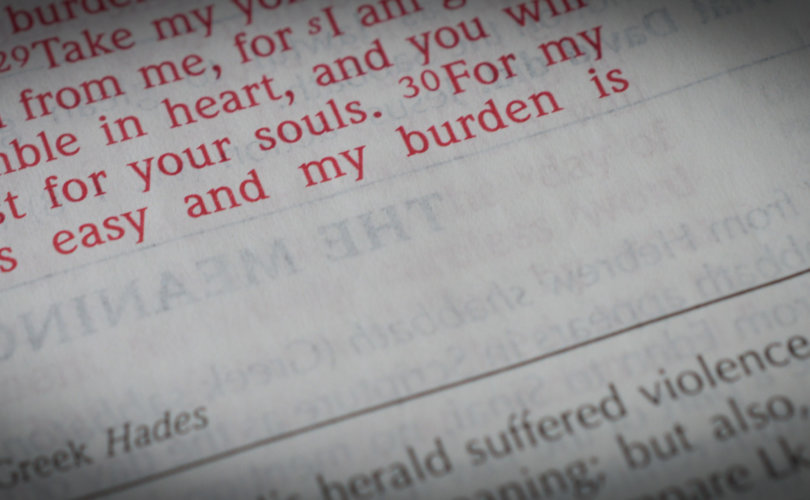 July 6, 2020 (LifeSiteNews) – It’s always gratifying when the words of Scripture we hear in church correspond directly with what’s happening in daily life. The Gospel reading for July 4th weekend is a perfect example. This was Jesus’ invitation in Matthew 11 to put on his “yoke,” that is to become his follower and live by his teaching.

The image of a yoke may seem antiquated to us, and perhaps slightly unpleasant, since we know it as a device used to harness draft animals for hard work in pre-machine days. But to Jesus’ listeners, the word “yoke” had another connotation as well.

People of his time were accustomed to bearing a heavy “yoke” of laws — royal laws, Roman laws, and most important, the Law of Moses, (the Torah) which prescribed 613 Mitzvot (commandments) governing every aspect of Jewish religious and civic life.

When Jesus asked people to put on his yoke, he wasn’t adding to their burdens. Rather, he was offering them freedom: “My yoke is easy, and my burden is light.”

This passage has special, and obvious, relevance to our celebration of July 4th. Independence Day commemorates the beginning of our effort to liberate ourselves from the heavy burdens imposed on us by an imperial master. July 4th is all about freedom.

The roots of that freedom — the principles on which our nation is built — are in the Bible, a book with which The Founders were intimately familiar.

The first principle is limited government. You might ask where this principle can be found in Scripture. The Bible (2nd Samuel) tells of how King David ordered that a census be taken of the people. This angered God. In Jewish understanding you had the right to count only those things that belonged to you.

The people belonged to God, not to the king. Hence, the principle that there are limits to the government’s authority over the people.

The second principle is freedom of the market. We are entitled to the fruits of our labor, and free to exchange our products. This too is scriptural, as Jesus pointed out when he observed that “A worker is worthy of his wage.”

The third principle is implicit in the first two. We need a strong civil society — one in which we have confidence that our rights are protected, our possessions recognized as our own, and the obligations of contracts honored when we take part in an exchange (that we get what has been agreed upon). We depend on the government to ensure those conditions through law: as little law as possible, and as much as necessary.

These principles are supported by moral precepts (or pillars). The most important is the primacy of the family. Families are the essential building blocks of society. They offer us protections and economic resources to shield us from dominance by the government, provide for our health and well being, educate the young, and support our dealings in the marketplace (until the growth of modern industries, most productive work was done in the family household).

But families are under attack today. The widespread celebration of sexual perversion has made immoral behavior common and accepted, brought it into our homes, forced it upon our children.

It has changed the very definition of family, which now is no longer specific to a married man and woman along with their offspring. A family can be pretty much anything you want it to be. In fact, a Massachusetts town recently granted legal recognition to “polyamorous” relationships (multiple partners of whatever sex).

Another key moral precept is trust. It’s what undergirds civil society, giving us confidence that our rights will be protected, our property secure. Trust is being undermined by a growing attitude of entitlement, by which increasing numbers of people see themselves as free to steal, pillage, loot, and destroy, all in the name of some vague imperative of “social justice.”

But this is the opposite of true “social justice,” which is only possible in a society where people feel safe, property is protected, and human life — all human life — is honored.

Those who celebrate perversion, or who make false social justice claims as a cover for entitlement, are liars. They’re destroying society by creating chaos. They’re working for the devil, because the devil loves chaos.

The only answer to all of this is that yoke Jesus talked about. Even as our taking it on ourselves is a step toward freedom, it also entails certain attitudes and standards of behavior that make freedom possible. Those demands may be lighter than the Law of Moses, but they make a claim on our hearts nonetheless.

There are also certain risks involved. One of Jesus’ famous “Beatitudes” speaks of those who suffer for righteousness sake. Some people are suffering right now.

These are truths which have always been proclaimed by the Church. But then, the Church is under attack too, its position in society being steadily marginalized, its ability to speak truth increasingly curtailed.

Take on Jesus’ yoke — the right yoke — embrace it. As St. Paul wrote in his Letter to the Galatians:

“Stand fast therefore in the liberty wherewith Christ has made us free, and be not entangled again with the yoke of bondage.”