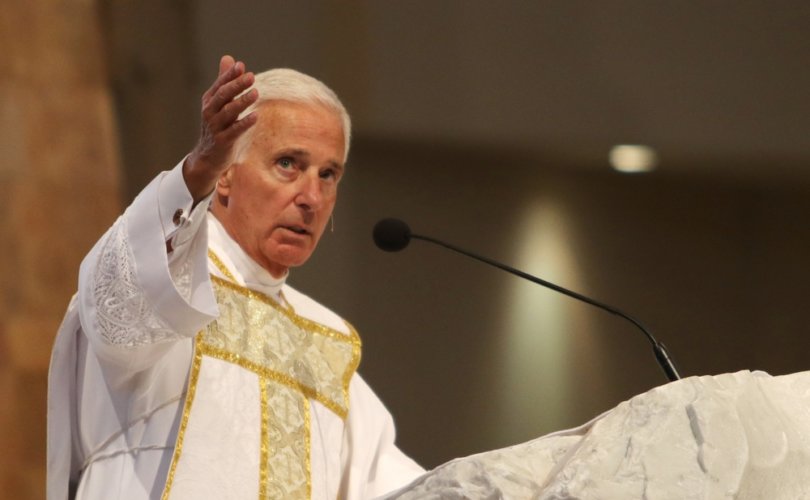 March 13, 2020 (LifeSiteNews) – Some years ago I was having a pleasant cup of java at a local coffee shop in the company of a police officer in my Florida town. Just then he received a radio call about an alligator prowling the grounds of a nearby hospital.

Being interested in police procedures (and not at all liking alligators), I asked if I could come along to watch how he handled the dangerous beast. When we arrived, we saw clearly that the alligator had been run over by a car.

“Take your nightstick and poke him,” I suggested bravely, standing well to the rear.

He poked with his club, and nothing happened. The alligator still looked dead. So the officer walked around to the other side of the beast and poked him again. Again nothing.

“Try one more thing,” I offered, screwing up my courage from a distance. “Kick his tail.”

The officer kicked the alligator’s tail, and suddenly, the frightening creature whipped itself around. It had been injured, but it was alive.

There’s a lesson in this little story: Satan is a lot like that alligator. It’s easy to assume he’s dead or not present. But when you least expect it, you suddenly find he’s very present, very conscious, and angry as that wounded alligator was.

The devil has made his home among the leadership of the Democratic Party for some time now, and found it a most hospitable environment. This can be deduced from the fact that every prominent Democrat figure is totally committed to abortion — even partial-birth abortion and post-delivery abortion, which is to say infanticide. What else but diabolical influence can explain their determination to block even the slightest impingement upon the murder of children?

Consider the recently failed effort to require abortion doctors to have hospital affiliations. This measure wouldn’t have restricted abortion in the least. Rather, it was solely concerned with the health and safety of women undergoing abortive procedures (which not uncommonly result in ancillary damage). Reasonable as it was, the legislation was seen as an intolerable compromise.

After the recent primary elections, the Democratic Party seems like an alligator that’s been run over. Its would-be presidential nominees have been viciously tearing each other to shreds, until the field has now narrowed to Bernie Sanders and Joe Biden. With two old, white guys — a Socialist and a longtime ward heeler — now competing to carry the standard of a party that presents itself as youthful, innovative and inclusive, it would be easy to assume the Democrats are near death.

But that would be a mistake. Satan is tricky. Those of us who care about the pro-life cause can’t let ourselves be lulled into complacency. Nor can we assume that whoever emerges from the Democratic convention as the ultimate nominee is guaranteed to be run over by Donald Trump.

I’m from Brooklyn, Trump is from Queens. I sometimes feel as if I grew up with the President, and to tell the truth, I would never have expected him to turn out to be as good as he has, especially regarding life issues.

At the March for Life, back in February, I found myself mesmerized by the beautiful speech he gave. Speaking to a crowd of about 100,000, mostly young people, he emphasized that every human life is a miracle and every child gives joy to a family. How long had we waited to hear something like that from a President of the United States?

As it’s often been said, the Lord moves in mysterious ways. And he picks people we wouldn’t expect him to pick to do his work.

Nevertheless, there are absolutely no certainties in the world of politics. A party that has struggled relentlessly to destroy the Trump presidency — even to concocting absurd plots and international conspiracies in order to fabricate a case for impeachment — will try anything to make an election advance its agenda, whether legally or otherwise.

And how fast could things turn if either Bernie Sanders or Joe Biden becomes President? As fast as that alligator turned on the police officer.

Abortion is only the beginning. Here in Florida, there’s already a “death-with-dignity” bill in the legislative pipeline (Senate Bill 1800). “Death with dignity,” of course, is a euphemism that means we can “put people to sleep,” just as we might do to a sick dog or cat (or a wounded alligator). Florida is just a bellwether. Can you imagine that such proposals wouldn’t become legislative priorities under a President Sanders or a President Biden?

In the Second Book of Kings, the prophet Elisha faces a battle which, according to the situation, indicates he’s likely to lose. But his servant has a vision of flaming chariots, and he realizes that God’s angels are coming to surround Elisha and bring victory.

Pray for those flaming chariots. And get ready for a fight. There’s an election ahead, and its outcome is by no means certain.

The alligator isn’t dead yet.