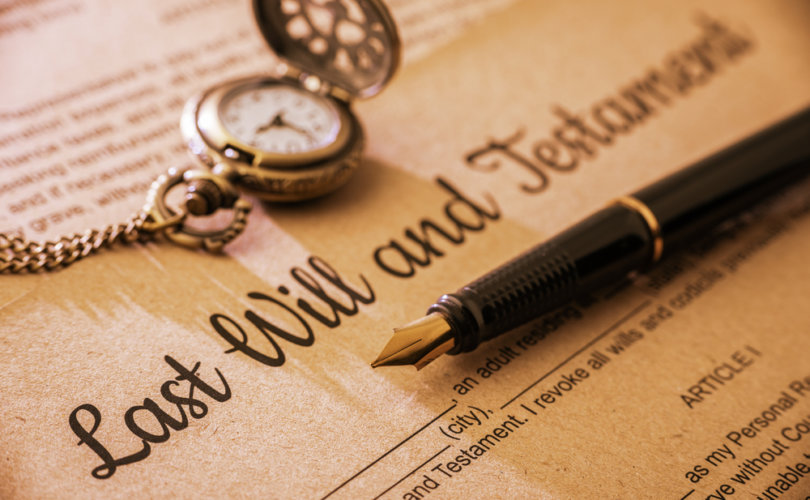 July 30, 2019 (LifeSiteNews) – The starvation death of Vincent Lambert, a 42-year-old French psychiatric nurse who suffered a severe brain injury in a car crash, echoes all the concerns raised by the Terry Schiavo tragedy of several years ago.

Lambert had suffered a tetraplegic spinal chord injury that left him severely disabled. He was unable to speak, though he appeared to be conscious and seemed to recognize friends and relatives visiting him in the hospital.

After an 11-year series of court battles between his parents, his wife, and other family members, the European Court ruled that feeding and hydration tubes could be removed, and Lambert left to die. He succumbed nine days later.

Lambert’s mother, Viviane, complained that her son received no “deep sedation” while he was being starved to death. As reported by LifeSiteNews, she observed that he was “moaning and groaning, gasping for breath, and crying” during that time.

This was a case of “passive euthanasia,” which denies normal care to a person, e.g. food, hydration, and normal medical care (antibiotics, insulin etc.), causing death by starvation. This is murder, and, what effectively caused Vincent’s death.

One of the most disturbing aspects of this sad incident is the ambivalence characterizing the response of many religious leaders. Typical was a pronouncement from a European interfaith group that commented, rather noncommittally, “We believe it is important to continue careful and in-depth discussions on these medical and ethical issues,” including “genuine dialogue with people at the end of their lives or the relatives of people who have become unable to communicate.”  The bottom line was little more than an expression of “confidence in the doctors of our country.”

Pope Francis also offered a less-than-definitive statement: “Let us not build a civilization that discards persons, those whose lives we no longer consider to be worthy of living: every life is valuable, always.”

Aside from the human tragedy befalling Lambert and his family, this case is important because it offers lessons to us as we consider what we would want done at the end of our own lives.

Certain principles affecting our choices have been enunciated clearly in Catholic teaching — primarily in an allocution by Pope Pius XII in 1951 to a group of Italian midwives. In that talk, Pius drew a distinction between “ordinary” and “extraordinary” means of preserving life. (Today these are often referred to by healthcare professionals as “proportional” and “disproportional.”)

A particular treatment or procedure might be considered “extraordinary” or “disproportional” if a patient would find it too painful, too costly, or too repulsive to accept. Also, it might be too experimental (or “exotic”), and therefore not inspiring of confidence. Under such circumstances, rejecting the use of a procedure would be judged moral.

Some years ago I was called in by the family of Rose, a women in her fifties who was suffering with cancer. She faced the choice of whether or not to accept an operation and a course of chemotherapy that might have prolonged her life by about six months, but would have subjected her to a difficult time of pain and discomfort.

I asked her what she, in her heart, wanted to do. She told me, “I don’t want treatment.” And so she went home, progressed in the disease (with palliative home care), and continued to receive Holy Communion until she passed away with her family at her side.

Rose made the right decision. She rejected medical procedures that would have been painful and repulsive to her.

A year or so later, I got a phone call from Roses’ daughter, telling me that her father, Al, was refusing treatment for a very painful and debilitating eye condition. He had been depressed since Rose’s death, and insisted he wanted to die.

So I got on the phone with Al and told him to go to the doctor. Fortunately, he listened to me, and an examination revealed a benign tumor behind his eye.

Al assumed that since I had told Rose that she was right in refusing treatment, then he was free to let his eye problem go unattended.

But there was a big difference. Rose’s condition was malignant and terminal. Al, on the other hand, had a tumor which, if left untreated, could have killed him, even though it was benign (non-cancerous). But he had a chance for genuine improvement, which Rose did not, and so was under a moral obligation to be treated medically — in other words, to not let a curable condition take his life unnecessarily.

Some people are confused about Catholic teaching, assuming that it demands “life at any cost.” This idea is known as “vitalism,” and it does not reflect the traditional moral perspective of the Church.

Others maintain a view known as “fatalism,” which disdains medical intervention and insists that the sick, the weak, or the old should be left to the depredations of nature. This is not a legitimate Catholic view either. Jesus healed the sick, and authentic Christian tradition has always held the medical profession in high regard.

Catholicism has a very balanced understanding of what’s proper for human dignity, how to defend the value of human life, and when to let life go. The Church recognizes that we do have to make determinations, because each case is different.

Patient age and physical condition are critical factors. Also, technology changes over time. Procedures that were considered extraordinary 20 years ago may be quite ordinary — even basic — today.

The key to having your wishes honored is thorough planning and clear expression of your moral intentions. And these matters must be taken care of beforehand.

First, make sure you have a will, and update it every few years to reflect the ongoing changes in your life circumstances.

Second, have a “living will.” This is a document, often provided by hospitals and nursing facilities, in which you answer specific questions about how you wish to be cared for and under what conditions you want treatment to be concluded. A Living Will should clearly state that “death by starvation is not acceptable, and that a Feeding Tube must not be removed unless one is in the dying process, making it futile.

Third, have a “health care proxy.” This is an individual you appoint to carry out your instructions in the event that you are unable to express your desires yourself. It should be someone who knows you and understands your intentions, and is willing to be your medical champion.

Finally, have a “durable power of attorney.” This is authority to handle your legal and financial affairs. It may be issued to your health care proxy or to someone else. In either instance, make sure you’re giving it to someone who likes you. And that last point is not made facetiously. You need a person who is dedicated to protecting your interests.

Lack of these advance arrangements was the main complicating factor in the Vincent Lambert case. He had left no instructions, and so conflict arose between his parents, who insisted on continued life support, and his wife, who maintained that he would not have wanted to be kept alive artificially.

Advances in medical science, introduction of new treatment techniques and devices, and extension of life expectancy make end-of-life issues more and more complicated and increasingly common. We’ll likely all face some aspect of them at some point.

Make things as easy on yourself as possible, and do your family a great and loving favor. Be prepared.

August 1, 2019, 11:15 AM EST update: This report has been updated to reflect more accurately Vincint Lambert's condition prior to his death and the medical assistence he was receiving. This report also now includes more information about what caused Lambert's death as well as more detailed information about what might be stated in a “living will.”