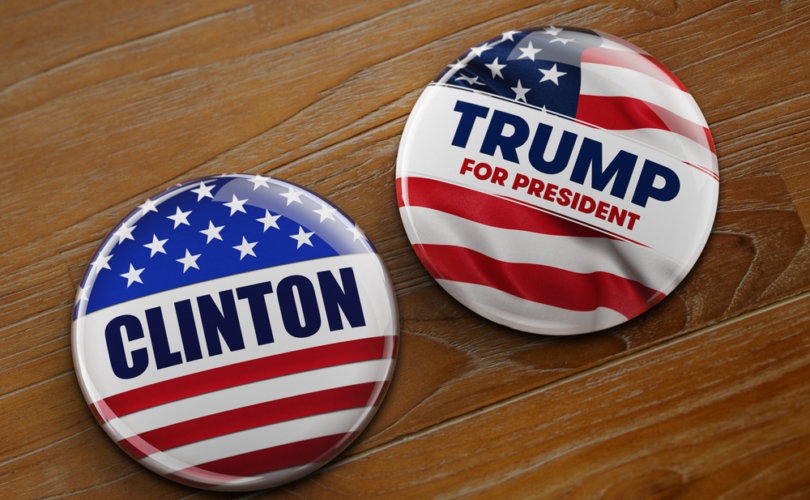 Editor's Note: Reverend Peter M. J. Stravinskas, Ph.D., S.T.D, preached the following homily at an Extraordinary Form Mass at the Church of the Holy Innocents in Manhattan on November 6, 2016.

In this homily, Father Stravinskas outlines how Christians can fulfill their civic duties by practicing the virtue of charity. Doing this, Father Stravinskas says, involves the spiritual and corporal works of mercy. Therefore, Christians should instruct the ignorant about the issues at stake, counsel the doubtful about the contrasting positions of the candidates, and admonish the sinner that voting against life and marriage are seriously wrong. Doing this will help others “come to know and act on the truth of what is at stake in this election.”

Father Stravinskas shares in their own words the major parties’ platform positions. He notes the “epidemic” of infidelity to Christ and quotes Cardinal Newman’s chilling warning about the “worst calamity of the last times of the Church.”

If Christians don’t end their rampant “silence and inaction” on crucial moral issues, they could face “reckoning” from God, Father Stravinskas says.

November 7, 2016 (LifeSiteNews) – Today’s Sacred Liturgy offers us much food for thought from the table of God’s Holy Word.

St. Paul urges us to “put on charity” and to “let the peace of Christ reign in [our] hearts.”  How will that occur?  By letting “the word of Christ dwell in [us] abundantly” as we “teach and admonish one another.”  And finally, that all that we do be done “in the name of the Lord Jesus Christ.”

In the Gospel, Jesus shares with us the parable of the wheat and the weeds.  When the weeds appear, the question arises: “How did this happen?”  And the response comes: “An enemy has done this!”  Nineteen hundred years later, Pope Paul VI – taking account of the dissent and confusion of the Church in his day  – would echo that line from the Gospel by asserting woefully: “The smoke of Satan has entered the Church.”

Two days out from arguably the most momentous presidential election in any of our lifetimes, how can the Word of the Lord assist us in fulfilling our Christian and civic duty?

Firstly, we need to ask just what charity is.  Charity is willing and working for the good of the other.  In these final days of the Jubilee Year of Mercy, it means determining how we have fulfilled the corporal and spiritual works of mercy and what can and should yet be done in their regard.  I would suggest taking the first three spiritual works of mercy as a plan of action between now and Tuesday: instruct the ignorant; counsel the doubtful; admonish the sinner – all in the context of helping others come to know and act on the truth of what is at stake in this election.

Last month, I shared with you the clear and pressing teaching of the Church on how a committed, serious and biblically grounded Catholic is to exercise his voting franchise.  If you missed that homily, our devoted and efficient master of ceremonies will be happy to pass it along to you.  This morning, I want to be even more explicit by presenting – almost in bullet points – the platforms of the two major political parties and their respective standard-bearers on the key issues at stake from a Gospel perspective.  In doing so, I am fulfilling the responsibility given me through sacramental ordination to “teach and admonish” the faithful, in the hope that my fidelity to my vocation will spur you on to fulfill the responsibility given you in Holy Baptism to be the salt and light and leaven Christ expects you to be and which the world so desperately needs – whether it knows it or not.

Comparison of the 2016 Republican and Democrat platforms

Preaching at the opening of St. Bernard’s Seminary in Olton in 1873, six years before becoming a cardinal, Newman spoke of that present moment as “these perilous times.”  He explained to the seminarians why he used such dire language:

I know that all times are perilous, and that in every time serious and anxious minds, alive to the honour of God and the needs of man, are apt to consider no times so perilous as their own. At all times the enemy of souls assaults with fury the Church which is their true Mother, and at least threatens and frightens when he fails in doing mischief. And all times have their special trials which others have not. And so far I will admit that there were certain specific dangers to Christians at certain other times, which do not exist in this time. Doubtless, but still admitting this, still I think that the trials which lie before us are such as would appal and make dizzy even such courageous hearts as St. Athanasius, St. Gregory I, or St. Gregory VII. And they would confess that dark as the prospect of their own day was to them severally, ours has a darkness different in kind from any that has been before it.

And what made for such a perilous situation?  Newman explained:

The special peril of the time before us is the spread of that plague of infidelity, that the Apostles and our Lord Himself have predicted as the worst calamity of the last times of the Church. And at least a shadow, a typical image of the last times is coming over the world. I do not mean to presume to say that this is the last time, but that it has had the evil prerogative of being like that more terrible season, when it is said that the elect themselves will be in danger of falling away. This applies to all Christians in the world, but it concerns me at this moment, speaking to you, my dear Brethren, who are being educated for our own priesthood, to see how it is likely to be fulfilled in this country.

And finally, in the spirit of “forewarned is forearmed,” the ever-prescient Newman issued a clarion call to vigilance to those future priests:

My Brethren, you are coming into a world, if present appearances do not deceive, such as priests never came into before, that is, so far forth as you do go into it, so far as you go beyond your flocks, and so far as those flocks may be in great danger as under the influence of the prevailing epidemic.

Nearly a century and a half later, that “epidemic” is full-grown and has matured, thanks to the silence and inaction of would-be Christians over the long haul.  In the next seventy-two hours, do your part to break that code of silence and inaction: by instructing the ignorant (about the critical issues that are at stake); by counseling the doubtful (about the stark differences that exist between the competing candidates); and by admonishing sinners (about the moral evil of voting for individuals and parties that promote abortion, that assault marriage and family as established by the Creator, and that seek to muzzle the Church in the public forum).

Our Lord ends today’s parable with a chilling warning.  Although He delights in showing mercy and in giving us ample and even super-ample opportunities to reform, there does come the final hour of reckoning.  God will not be mocked.  Throughout this election cycle, I have used every means at my disposal to assist the lay faithful in being Christ’s witnesses to the truth in the world.  The ball is now in your court.  I would suggest taking as your prayer one written by Cardinal Newman and prayed daily by Mother Teresa’s Missionaries of Charity:

Dear Lord, help me to spread Thy fragrance everywhere I go.
Flood my soul with Thy spirit and life.
Penetrate and possess my whole being so utterly, that all my life may only be a radiance of Thine.

Shine through me, and be so in me
That every soul I come in contact with may feel Thy presence in my soul.
Let them look up and see no longer me, but only Thee, O Lord!

Stay with me, and then I shall begin to shine as Thou shinest; so to shine as to be a light to others;
The light, O Lord, will be all from Thee; none of it will be mine;
It will be Thou, shining on others through me.

If you operate always with that spirit, regardless of what happens on Tuesday, you will have that peace which only Christ Jesus can give.  And never forget Mother Teresa’s salutary and holy reminder: God does not call us to be successful, only faithful.