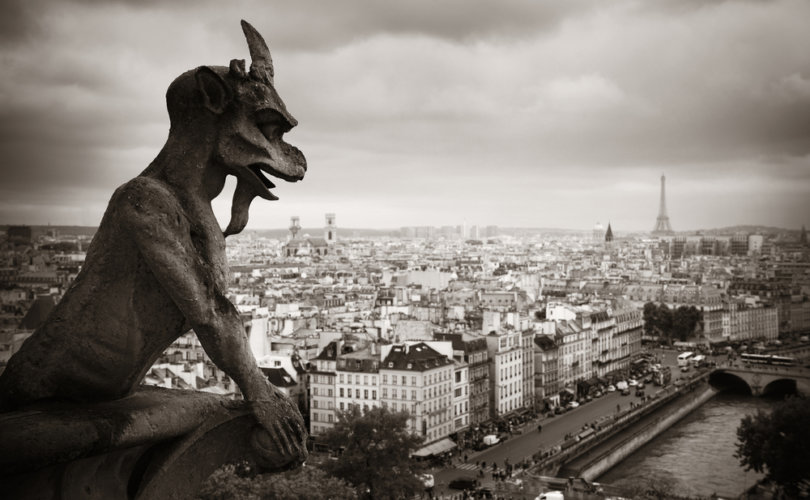 April 3, 2020 (LifeSiteNews) – A malevolent force kept by my side when I was dying in a hospital room in 2009. Repeatedly, though, Fr. William Spacek chose to walk into the lengthening shadows of my neuro-ICU room. As many as three times a day, the hospital chaplain held the Eucharist above my head. He told my wife demonic forces had come into my room.

I used to see my daughter Gabby caught up in the ceiling tiles, drowning in a shallow flowing stream of water. When I attempted to save her and found that I couldn’t move due to my restrained arms (tied to my bedside by nurses), I was mocked by revolting forms that had taken up hallucinogenic real estate in the undulating tiles. I vividly recall, in particular, one gyrating multi-headed demon sweeping his translucent hand toward my drowning daughter, taunting,“What of it? Gonna save her or what?”

My brain aneurysm caused intense headaches, which negated sound sleep. When I did fall asleep, demons entered. I remember one dream (I remember many) that seemed as true-to-life as the blooming tree outside my window right now. My son Sean and I were at a carnival when he began to choke on something lodged in his throat. When I tried to dislodge it, a revolting creature swung a metal pipe into the back of my head. Each time I rose from the pavement, he swung, full-force, and sent me to the ground. I watched Sean choke to death on the ground in front of me, and a chorus of demons began to roar riotous Hallelujahs.

When six months later I returned to the hospital to thank Fr. Spacek for his resolute care, I asked about the oppression in my room. “Demons were there. I could sense it right when I walked into your room,” he said. “I’ve looked into the face of Satan. I know how he operates.”

Satan’s work does seem to have a primitive simplicity: he divides a soul from God and works to destroy it through his duplicity. And when the soul is in its most vulnerable state, the scale and ferocity of his work seems to intensify.

So when a few weeks ago because of health concerns bishops began to shutter American churches like a piecemeal extinguishing of Tenebrae candles, I began considering the Evil One, whose cackle these days, one might imagine, barks as grotesquely as the chorus on that Good Friday morning: “Crucify him!.”

I started to consider the black talon of Satan’s pointer finger, and where it was directing his demons now that reception of the Eucharist has mostly vanished and absolution of sin seems harder to receive than riding a bicycle to the moon.

I recalled what one of the world’s leading exorcists told me a few years ago when he began to travel to American seminaries throughout the 1980s.

“I began to see the seminary as the sick womb of Holy Mother Church,” said 93-year-old Monsignor John Esseff, renowned for his ability to read souls. “Priests became deformed in the belly of the Church – or if you were a well-intentioned and good seminarian, you were going to be aborted. The guys who were real, they would just be aborted.”

“I saw it is demonic. It was easy to piece together – when you’re anti-Eucharist, anti-Mary, and anti-prayer, you’re of the demonic.”

Two weeks ago, I began to offer fasts and rosaries for those holy priests who’d survived harrowing or dry seminary experiences – because I suspected that the talon was pointed directly at them today.

St. Padre Pio and St. John Vianney recognized as they went about their Ripken-esque spiritual work of unburdening souls in the confessional, that undesired visits from demons were likely in their bedroom later that night. For years they were brutalized – until the harassing chorus knew to depart; they came to understand the war was unwinnable. As mediators and spiritual fathers in the supernatural order of grace, Pio and Vianney relied on their demonic attacks to intensify their own fasting, prayer and attentiveness to souls. So the demons, powerless, left and never returned.

But Pio and Vianney are paragons. I wondered about my priest friends. I suspected they were under attack within these lonely days.

These are priests who commit to praying their Office, making a daily Holy hour and praying a daily rosary. These priests, also I knew, embraced forms of mortification/s each day to help anchor themselves and their flock to God. Though sixteen-hour spiritual workdays have become customary, they don’t resemble burnt-out Branch Davidian cult members or emaciated bands of wilderness hermits. Not one of them smells of incense or points his nose to the sky like a self-sanctified Marie Antoinette. These priests seem to be the happiest men in the world because of their untiring pursuit of holiness within themselves and their flock.

I picked up the phone yesterday and called some of these priests. I asked a single question:

“Are you under attack?”

“Yes. Really, the oppression is everywhere now,” said the first priest I spoke with. He’d just driven 140 miles round-trip for the second time in a week to gather 300 cases of bread (1,200 loaves) to distribute to the poor.

“From my first Holy Hour to my videotaped Masses, to trying to reach my parishioners in on-line retreats and talks; oppressions seem to always be there. They’ve been very strong,” he said. “It’s the voice of condescension. It’s become extremely tiring. It’s most tiring during [virtual] talks; everything becomes slow and difficult. It’s more exhausting than the Masses.

“Here’s just one example of how the Evil One works – I celebrated three Masses on the Feast of the Annunciation because everything kept shutting off. The video wasn’t working. This has never happened.

“The spiritual lifelines out there have been cut off, so the demons are going to attack the lifelines [priests] who still remain in the spiritual battle. It’s physically and mentally exhausting because doubts creep in and you think – ‘Is all this stuff I’m putting out there even landing, or is it just a waste?’ You think, ‘What’s the point?’ I’m not a priest to be in front of a camera. What’s even landing to help the folks?’

“But I know Our Lady is protecting me throughout all of this. So the spiritual work is protected. That’s really helped me.”

I called another priest.

“A great heaviness has entered into my priesthood. This time has been the biggest test of my priesthood, and I guess of my life,” said the priest, known for his cheerfulness, work ethic and devotion to Our Lady. “I do think the Evil One is hitting the priests hardest now. His number one tool is his spirit of discouragement. His M.O. is to make it seem like we’re accomplishing nothing as a priest. Why pray? Why sit by the window [for outdoor confessions] when no one comes. Why make another [senseless] video on the need for prayer during COVID-19 when no one watches? It’s like his voice says, ‘You’re worthless now as a priest – you’re detached from your people, and they aren’t praying or paying attention anyway’.

“But I know it’s a big lie and it’s the voice of the devil. And when the oppression really comes, I just keep going back to the tabernacle, where everything becomes clear. I am a mediator between God and man, My prayers, Holy Hours and spiritual work must be exercised now. The work of a mediator is a beautiful offering in this dry period because not only does it give me something to offer my parishioners – the rosary, visits to Blessed Sacrament, the reading of scripture, fasting – but everything I do now becomes essential in this spiritually dry period.

“During these dry times, in a sense, I need to become even more active, With my folks cut off, I need to be in the trenches for them now. And the Christ that lives in me puts me in this battle. This is a time for a priest to shine. He shines because he fights the oppression against himself and against the parishioners that he’s become separated from.”

I phoned an exorcist in Washington D.C. I asked if demonic activity had increased since the Eucharist had been held back and many church doors had been locked.

“Exorcists and those gifted individuals with insights into the spiritual realm have seen more intense demonic activity now. There has been a definite uptick,” he said, “Satan’s taken advantage of this crisis to meet his own ends, It seems demons have been given a free hand now.”

I called a layperson active in the deliverance ministry, who wished to remain anonymous.

“The intensity of the suffering has increased. It’s the spirit and voice of condescension that speaks loudly now,” the individual said. “At the same time, the call to prayer is like a tsunami now. I feel like I don’t need to sleep. I just want to pray throughout the night – this seems to be the same experience of the priests I’ve been working with.

“There is a ferocity and intensity about what they are seeing now in the spiritual realm.”

When I was dying in my hospital room, at the most vulnerable point in my life, I felt the same way.