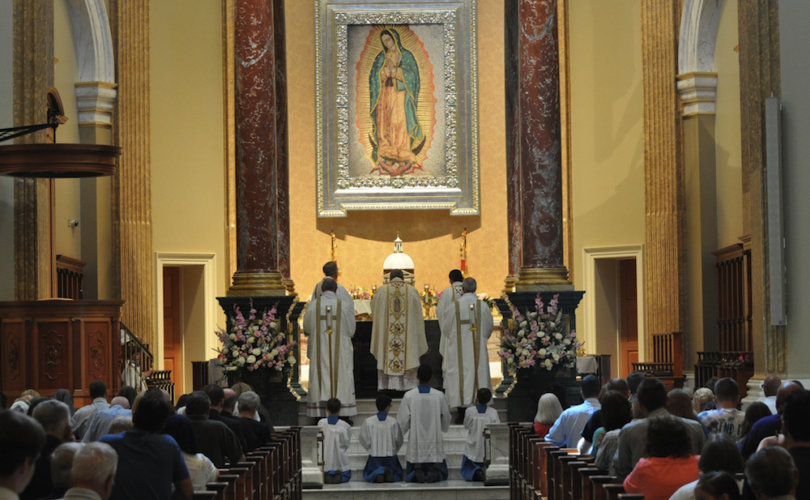 December 13, 2019 (LifeSiteNews) — I remember the moment my childhood died. It was a winter night before Christmas; the lights were strung up on storefronts, and I could hear the bells from the Salvation Army in front of the K-Mart. A pay phone rang, and I reached for the receiver. Thereafter, the lights bled.

My father used to take his growing family up the road to Pappy’s Pizzeria when the restaurant had a 2-for-1 Tuesday-night pizza special. It was a kid’s wonderland. Not only did Pappy’s have a piano that played by itself and funhouse mirrors, but a large glass window allowed kids to gawk at the team of pizza-tossers. If you were lucky, you’d get a smile or wink.

Thirty child-sized steps away from Pappy’s and two shops down was Foos Fun, a small arcade that offered a dozen or so pinball machines with an air hockey machine and a few Asteroids and Space Invaders machines thrown in. It was tradition for me, my older brother Danny, and sisters Chrissy and Karen to spend a few minutes at the arcade before our pizzas were ready.

A pay phone was situated between the two establishments. I found it the strangest thing that it was ringing. Why would someone call a pay phone? I reached for the receiver.

I stood by myself in the cold, eight or nine years old, when a man’s voice on the other line verbally raped me — not that I knew what that meant. He used words, terms, and descriptors I hadn’t known, but he was quick to teach. The voice on the receiver started our one-way conversation by telling me he was looking right at me, and that I was a beautiful boy.

The pizzas were on the table, and I was still on the phone. I forget who, but someone came outside and told me the pizzas were ready. In from the cold, I didn’t tell anyone about what had happened. No one asked, so I just sat in Pappy’s wooden booth like a boy in a graveyard at midnight.

But Mom saw something.

When later that night she looked into my eyes and asked if everything was okay — I didn’t cough it up. I didn’t know how. So Mom knew to just stay close to me in the days that followed. And that was big, because her watchfulness was torchlight for her boy caught up in a cave.

Mom died too soon from cancer. Throughout this crucifixion in the Church, I’ve often thought of her. If a single snapshot is able to capture the image of a lifetime, it would be this of Mom: I would occasionally walk unannounced into my parents’ bedroom to find her in the afternoon’s half-light, kneeling alone by her bed, praying the rosary. She’d look up with hesitant eyes that told distinctly different stories: her self-consciousness at being caught in the raw nakedness of prayer and her hope that I’d kneel beside her. That openhearted look hangs forever in my mind like a warm remembrance.

Mom was devoted to Our Lady, and she loved priests. More than two dozen priests processed down the aisle at her funeral, wanting to offer her gratitude for her esteem for their priesthood. I think these priests realized that Mom — like Our Blessed Mother — expected only heroism from them.

Mom entered into the heart of things, and it was her I thought of when my local ordinary, Archbishop William Lori, said recently to a Crux reporter after his ad limina visit with Pope Francis: “You know, the Pachamama is come and the Pachamama is gone. I went through most of the Vatican departments, and I looked in vain for the Pachamama. … [Laughter] In fact, I was going to give little Pachamama Christmas ornaments to my staff, but they weren’t ready. [Laughter]”

Archbishop Lori’s “high-and-low” search was made in jest, but it certainly wasn’t funny.

Whores leave bedrooms before the spouse gets home. So yes, Pachamama is gone — but her stain remains. Our Lady isn’t feeling jovial nowadays, and when she watched a prostitute enter her Son’s house and contaminate it before the gaze of St. Peter, I imagine she was angry. Just as Mom saw the deadening of my eyes and took it seriously, Our Lady, perhaps, sees a deadening unfolding within her Son’s Church.

Over the years, when the memory of the pay phone has come to mind, I walk through it, step-by-step, like the kid who keeps looking under the Band-Aid though he knows the wound’s still ugly and unhealed. It feels that way today with the Church, where confusion unfolds in quick succession and in overloading fashion. In just the past 12 hours, I’ve read what seems to be a misuse of Peter’s Pence collections and the praising of Greta Thunberg by Cardinal Peter Turkson, prefect of the Vatican Office for Integral Human Development. There were more seeming German synod heresies and strange comments from Archbishop Vincenzo Paglia on accompaniment during assisted suicides and on the eternal resting place of Judas the Betrayer.

And this evening before Mass on the Feast of Our Lady of Guadalupe, America Magazine tweeted that “no hard evidence [of] St. Juan Diego ever existed” and of “Guadalupe’s alleged appearances.”

As Mass began, I watched a faith-filled Marian priest process down the aisle. Emblazoned on his vestment was a stunning image of the Our Lady of Guadalupe as she appeared on Juan Diego’s tilma. An ode to Mary was sung by the cantor, and a full-throated, overstuffed Church paid her homage in song. The priest homilized on Our Lady’s ferocious maternal weight and desire to mother us into the arms of her Son.

It was then that I thought of the roses that spilled out of the Mexican peasant’s tilma. The unbelieving bishop fell to his knees in awe because Mary showed him the power of her Son. This is what He can do.

Bishops and priests who lack a devotion to Our Lady cause the works of the old Adam to spill from their vestments: compromise with the world, the wrong choices, and the inability to sacrifice. Rather than protecting Eve (Mary), Adam kept his mouth closed. He wasn’t a man or a father. Marian-less clergy have chosen Pachamama for their mother — an effeminate and false idol of deity.

The priest devoted to Mary is a knight at an all-night vigil, eager to give his all. He has consecrated his life to her Son directly through her Immaculate Heart; he knows that because she never said No, that he, too, can never quit working for his flock. Long days are common for this lot of priests. Their stamina as messengers of her Son is remarkable because they are her benevolent, joy-filled slaves.

The popes, bishops, and priests who rarely speak of the merits of Our Lady seem to present only themselves to the world. The consequence is a muting of Our Lord and Savior Jesus Christ and the Gospel. Their tilmas often spill just weeds. Rather than depending on Blessed Mother to help direct each step of their priesthood, they leave themselves unprotected and vulnerable to the temptress of the world to stain their covenant to God.

The priest who discards Mary permits a gulf to grow between the priest he is and the priest God wants him to become; his dismissal of Christ’s Mother is an iconoclastic avoidance of his own possibility. Rather than choosing to engage in the trench warfare of striving for a priesthood of Marian virtue, it would seem they choose a sterilized lifestyle as their priesthood’s true identity fades. They seem to present a pseudo-feminine priesthood to the world; there seems to be a lacking in Marian ferocity, benevolence, and commitment to proclaim her Son to the world.

Here is a Marian priest. “Mary is relentless with me,” the priest said. “Here’s how I picture her: I see her on the ground taking her into my arms at the Fourth Station, and I’m already completely beat and broken.” This priest paused as his voice broke and tears began to well up in his eyes. “And she looks at me and says, ‘Your Father said, “You go and die.” You better do that, son — you undo [the sin of humanity]. Please undo this now.’ And she helps me up so I can move forward with the cross. That’s who Mary is to my priesthood.”

His tears fell. “I can’t be a priest without this relationship with Mary.”

Kevin Wells is the author of The Priests We Need to Save the Church, released by Sophia Institute Press in 2019.