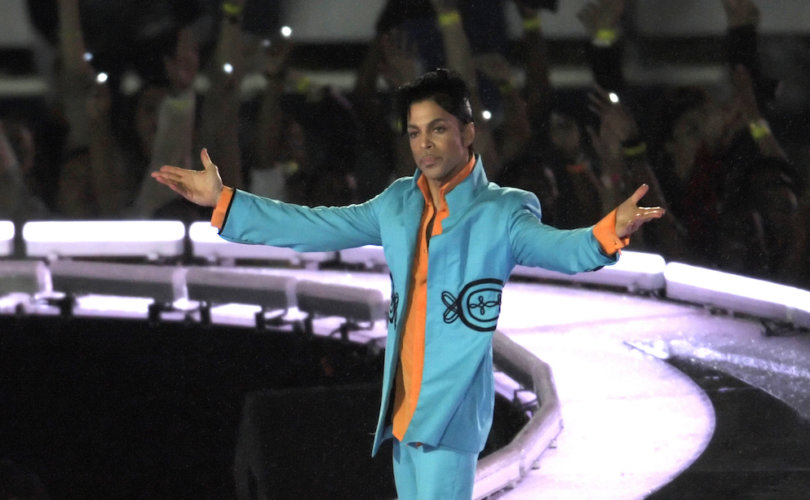 April 28, 2016 (LifeSiteNews) – Music star Prince has died and the world has seemingly canonized yet another one of its own, praising him as an icon of artistry and individuality, a legend of unsurpassed musical genius, one of humanity’s bright lights. But behind the superstar’s glamorous life is the story of a broken individual who, especially in his earlier career, popularized a perverse vision of human sexuality.

Prince was rightly praised for his musical genius, but he was also disturbingly lauded for being a radical sexual trend setter, someone who blazed the way for a new, amoral sexuality that rejected all the Christian virtues related to that intimate realm of human relationships. Prince showed others how to live according to their fancies about sex and gender, even if they did not fit the lessons and traditions of millennia.

Fusion’s Dodai Stewart praised the singer for his sexual trend setting in this way:

Dig, if you will, a picture: The year is 1980. Many states still have sodomy laws. The radio is playing feel-good ear candy like Captain and Tennille and KC and the Sunshine Band. TV hits include the sunny, toothy blond shows Three’s Company and Happy Days. There’s no real word for “gender non-conforming.” But here’s what you see: A man. Clearly a man. Hairy, mostly naked body, [his privates] bulging beneath a satiny bikini bottom. But those eyes. Rimmed in black, like a fantasy belly dancer. The full, pouty lips of a pin-up girl. Long hair. A tiny, svelte thing. Ethnically ambiguous, radiating lust. What is this? A man. Clearly a man. No. Not just a man. A Prince.

Huffington Post’s Al Donato ran a glowing article outlining ten ways the singer “transcended society's ideas of what it meant to be a man.” He wrote:

A pop-culture iconoclast, the purple monarch pushed gender boundaries with a royally-ruffled wardrobe and eyeliner sharp enough to cause a riot…He was renowned as a gay icon — although, his statements later in life have suggested his beliefs contradicted this status. Whatever his stances were, there's no question he paved the way for generations to embrace gender ambiguity…Here's a look at some of the transformative moments when Prince took traditional notions of masculine and feminine, stomped on them with his towering heels.

Among the ten ways, Donato included Prince’s lines, “I’m not a woman, I’m not a man, I am something that you’ll never understand”; his having posed nude on the album ‘Lovesexy’; and his bizarre name change to the male and female gender symbols fused together.

A ‘north star’ for the sexually confused

Though the extent of Prince’s influence on young people’s views of sexuality will never be fully known, he most certainly played some role in shaping our culture’s current state of sexual confusion.

In the wake of Prince’s death, one young writer recounted how Prince’s 1997 appearance on Disney’s “Muppets Tonight” got her hooked on Prince’s music and gender-bending message.

Jordan Scruggs, who identifies as ‘genderqueer,’ remembers being seven at the time. On the show, Prince sang about Cynthia, the outsider Muppet who learned that it didn’t matter what people thought about her: “If you set your mind free, baby you’d understand,” he sang.

“Prince had a magical blend of masculinity and femininity that I was searching for but couldn’t find within my own community or anywhere, really…There was no talk of gender identity or being queer,” Scruggs writes in Fusion in an article titled “How Prince helped me be black and genderqueer in America’s Bible capital.”

Prince understood. He was what I was missing. He was unapologetic. Sexy. Proud. Genderless…I found a north star in Prince and his identity because he showed me the power of my genderqueer body. Prince let me see a person who wore makeup and whatever clothes he wanted, not caring whether his choices were on the gender binary. Prince created both transcendent music and his own identity and did neither for anyone’s approval or opinion. That’s brave as hell.

Scruggs highlights what seems to be the crux of the problem: Prince’s amazing musical talent gave him a stage that he unfortunately used to display his broken and very often disturbingly perverse notions of sexuality, passing them on to up-and-coming generations.

Prince’s notion of sexuality, as depicted in his songs and lifestyle, are completely contrary to traditional Judeo/Christian sexuality, as revealed in Scripture and passed down through the generations.

For millennia it was understood that God created human sexuality for two purposes. First, to bring a male and female together in a loving union where they would be faithful to one another throughout life, and second, by means of that union to create children. God’s plan boils down to a couple uniting to generate, protect, and nurture new life, while Prince’s boils down to lust, and ultimately violence.

This is why it was shocking to see places such as the official Vatican newspaper L’Osservatore Romano paying tribute to Prince, and the Catholic cardinal who heads the Pontifical Council for Culture tweeting the lyrics to one of his songs.

While it is true that Prince in his later life backed away from his earlier image — maybe because of his involvement with the non-Christian Jehovah’s Witness sect — he never repudiated his earlier life nor apologized to the countless devotees who were enamored by his seductive, perverse lifestyle.

It has often been understood that all genuine art is for the sake of leading people to a deeper contemplation of beauty, and in this encounter, one ultimately encounters something of God, who is Himself the beginning and the end of beauty. In this way the true artist is really one who uses his talents — be it through music, painting, sculpture, other forms — to capture what is beautiful, through which we mortals are then able to glimpse what is divine.

It is for this reason that Prince’s life can be seen as tragic. Here was someone with extraordinary music abilities who melded his talent with a twisted sexual rebellion to create a hedonistic rule-breaking musical spectacle. And we have recently learned that one of the prices that Prince had to pay for this was an intense, 25-year addiction to very powerful painkillers that made it possible for him to continue his exotic stage performances.

We should lament that Prince abused his exceptional talents, given to him by God, to undermine and even outright attack God’s plan for human sexuality. And we should pray for the countless souls who were likely influenced and continue to be influenced by means of his art, to explore and experiment with dangerous sexual practices and thinking that was contrary, again, to the natural order of life given in God’s plan for human sexuality.

The world has again carelessly canonized one of its own, as it not too long ago also did David Bowie, who was similar to Prince in many ways. Still, we should hope that at the very end Prince saw truth and made peace with God. We should pray for the repose of what appears to have been a tortured, gifted soul who was unfortunately seduced to use his brilliant talent to bring more confusion into an already much confused world.