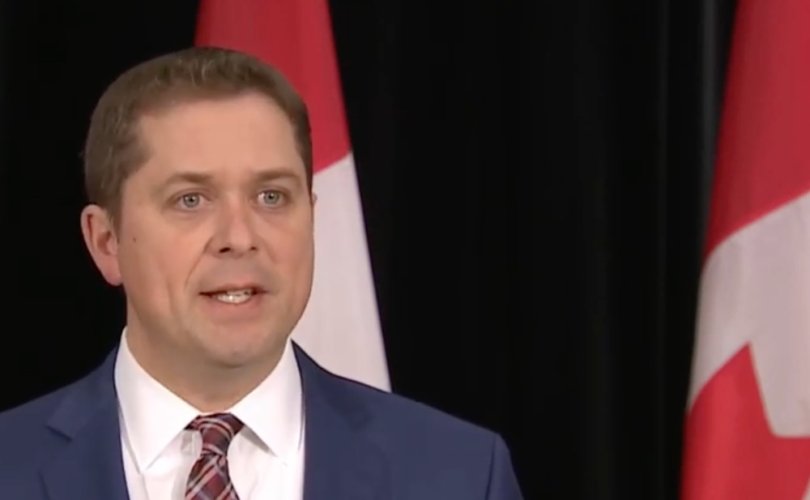 November 27, 2019 (LifeSiteNews) — In the weeks following Canada’s October 21 federal election, the socially liberal wing of the Conservative Party has joined ranks with liberal media to blame the party’s loss on its large and influential pro-life and pro-family base.

A stream of articles has come out claiming that leader Andrew Scheer’s failure to adequately distance himself from his past support for pro-life laws and opposition to same-sex “marriage” was a key factor in the party’s loss.

The most prominent name behind this bid to silence social conservatives is Peter MacKay, the former Conservative government minister and a leading candidate for future leader of the party. MacKay claimed that Scheer’s past social conservative actions on these issues “hung around [his] neck like a stinking albatross.”

Pro-life leaders are countering by arguing that the party needs to learn that it cannot win without energizing its social conservative wing — yet Scheer specifically chose to alienate them instead.

“Andrew Scheer and his advisors ran a blunderous campaign on many fronts,” writes Campaign Life Coalition in its election analysis. “He alienated and de-motivated a significant portion of the ‘small-c’ conservative base by copying Liberal policy positions, and giving the impression that the only constituency he was concerned about satisfying was the CBC.”

“In our view, the reason Scheer lost is because he failed to inspire the small-c conservative base, which includes pro-life social conservatives as a huge constituency.  Not only did he fail to inspire, but he insulted and alienated them.

“On social issues, Scheer stepped into a trap set by his Liberal opponents. By constantly attacking him about his past pro-life and pro-family beliefs, they goaded Scheer into conducting voter suppression on the Conservative Party’s own base, thus demoralizing socially-conservative supporters and activists.”

Jeff Gunnarson, Campaign Life’s national president, says that there have always been so-called “Red Tories” who want to steer the party sharply in the direction of the Liberal Party and muzzle any pro-life and pro-family voices.

“For sure there are those in the party and in mainstream media who are driving the narrative that it's time to close the chapter on abortion, same-sex ‘marriage’ and other relevant life and family issues so that the party can focus on the issues that are ‘important’ to Canadians and the Conservative Party can win only if they focus on such issues. To that end, the party has and will, under the current regime, preclude strong social conservatives (pro-lifers) from running as candidates and/or presenting pro-life, traditional family policies and legislation.

“It’s going to take double the effort to get people to get up against this Red Tory machine . … Pro-lifers need to say ‘Look, we’re not going to check our morals and principles at the door.  That’s just ridiculous.’ … That’s the work that’s ahead of us, is make sure, as we have had to always, that the social liberals do not take over the party, which would leave us party-less,” he added.

‘Stuck in the past’?

While the Conservative Party’s leadership tolerates members with pro-life and pro-family views, evidence of the betrayal of the social conservative voice was brewing before the election. Rumours are swirling, as reported by The Globe and Mail on October 10, that MacKay was discontent with party leadership and was eyeing the top spot.

Indeed, after the election, the “Red Tory” sentiment within the Conservative Party was seen in MacKay’s comments while speaking to a Wilson Centre think-tank panel in Washington, D.C. on October 30.

“What went wrong? Well, I’m going to be very honest with you,” MacKay said, according to the Canadian Press. “I think there was a number of issues that became very prevalent in this election that nobody other than the politicos wanted to talk about. People did not want to talk about women’s reproductive rights, and they didn’t want to talk about revisiting the issue of same-sex marriage.

“And yet that was thrust onto the agenda and hung around Andrew Scheer’s neck like a stinking albatross, quite frankly, and he wasn’t able to deftly deal with those issues when opportunities arose.”

MacKay later seemed to back off somewhat, saying during an interview with CTV News published on November 11 that he will vote for Scheer as leader when the time comes.

On November 20, two former Conservative Party senior staffers and strategists echoed similar views, bluntly blaming the election loss on the party “being stuck in the past.”

“The fundamental problem is the Conservative Party’s lack of clarity on LGBTQ rights. Canadians expect their political leaders to share their values. Full stop,” argued Melissa Lantsman and Jamie Ellerton.

Scheer’s betrayal of pro-life base

Andrew Scheer, who served as speaker of the House of Commons during the Harper years from 2011 to 2015, won the final ballot of the Conservative leadership vote in May 2017 in large measure because social conservatives backed him over runner-up Maxime Bernier.

Yet he quickly made it known, and reiterated repeatedly, that if he became prime minister, he would  “oppose” all “measures or attempts” to open up the debate on abortion or, as he put it, “divisive social issues” such as homosexual “marriage.”

Beyond that, during the election campaign, he pledged not to touch any funds allocated to fund abortion in other nations, thereby advancing an even more liberal position than former Conservative prime minister Stephen Harper. “We are not reopening this debate at any level,” Scheer said, adding that his party’s proposed foreign aid cuts would “not affect groups or programs going forward.”

During the nomination process, the party leadership actively took steps to silence some pro-life and pro-family voices. Christian psychotherapist Dr. Ann Gillies was abruptly told her nomination in the riding of Bruce-Grey-Owen Sound had been disallowed.

“As far as Scheer goes…He is adrift, nobody wants him, nobody believes him. The right doesn’t believe him and the left do not believe in him.”

‘We can’t let them shut us out’

Garnett Genuis, the pro-life Member of Parliament for the Alberta riding of Sherwood Park-Fort Saskatchewan, who himself is a Catholic and has been in the news lately for defending Scheer and religious freedom (saying “anti-Catholic bigotry” was to blame for attacks on Scheer), was direct about his support for the pro-life voice within his party.

“If the Conservative Party were ever to exclude people with pro-life views, it would cease to be united. So I cannot imagine a scenario in which the party as presently constituted or under our current leadership would exclude pro-lifers,” Genuis told LifeSite.

He also seemed to admit that it’s no secret there are those within the party who want to silence the pro-life voice.

“However, I think a future scenario in which the Conservative Party divides along these lines is not outside the realm of possibility, especially with certain ambitious people already trying to use the leader’s pro-life views to undermine him. But radical moves to the right or the left would risk dividing our party and give Trudeau a free hand to pursue his agenda.”

Gunnarson feels that despite the fact that M.P. Genuis, as well as Scheer and others in the party,  are personally pro-life, the reality is, he thinks the party needs a real and robust pro-life leader if there is to be any hope. He also notes that the “Red Tories” in the party must be countered, as Canada needs a party to stand up to Justin Trudeau’s pro-abortion, anti-family agenda.

“It’s hard to say, and I think Garnett (Genuis) is a lot like Scheer, in my opinion, in the things that he has done and said. I would not encourage him; we would hope that there would be a stronger leader than him[.] … Garnett is really good as an MP. He votes the right way on our issues in the House (he voted against a good pro-life resolution at the Halifax convention) but as it pertains to leadership, it appears he has been duped into believing that one must be silent on the idea of taking any action on legislation nor even speak about it publicly,” said Gunnarson.

Gunnarson added that what he feels is needed is for someone to proclaim boldly the truth about the absolute need and urgency to protect the unborn and that they should be more robust in their convictions. That starts with the proclamation that God is the ultimate authority.

“There is hope, despite what you hear in the mainstream media and from party executives. Pro-lifers and social conservatives are here to stay, and we will do whatever we can to keep our issues alive. Despite the forces against us,  pro-lifers will continue to be a presence, and that includes those candidates who will run for nomination in the party and win as we witnessed in this last election cycle.”