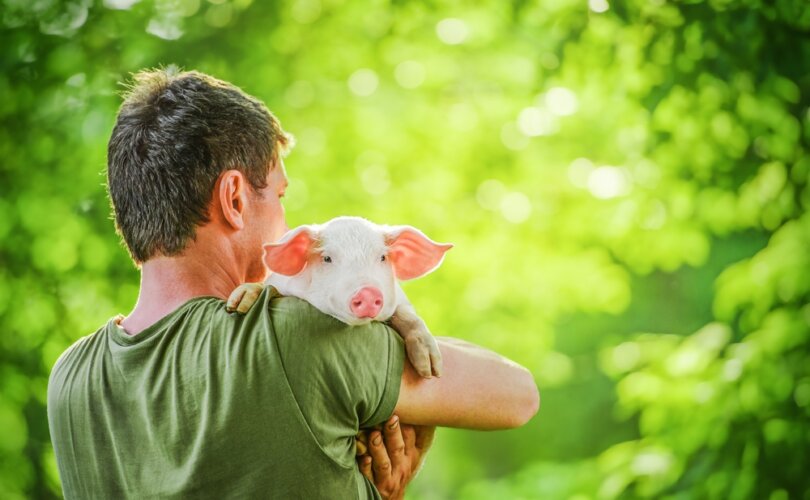 (LifeSiteNews) – A recent episode of The Good Doctor—a medical drama about a doctor with high-functioning autism—got me thinking about the misplaced importance of animals over humans.

In a nutshell (and yes, this is a spoiler for this particular episode), the story goes like this: During a man’s heart transplant surgery, the doctors find that the donor heart is damaged. They cannot replace his damaged heart with another, so they postpone the surgery and try to decide the next steps. The man is too sick to wait, so it is decided to use a pig heart. But one of the new interns doesn’t like this idea. She says it’s cruel to kill a pig to use his heart for a human.

Despite her protests, the surgery is scheduled, but when the pig heart arrives, it comes still beating inside the pig. Apparently, it’s better for the transplant if the pig dies just before implantation into the human. To the doctors’ chagrin, they must take his heart themselves. In the OR, just as they are about to cut the pig’s heart out, someone runs into the room and tells them to stop. A motorcyclist has just been killed and he is a match, so they can use his heart. The doctors all cheer because they don’t have to kill the pig.

I hope this sounds as macabre to you as it did to me when I watched.

The doctors literally cheered when they heard that they didn’t have to kill a pig, yet a human being had just died.

No one acted sad or upset that a man had just lost his life. The focus was all on saving the pig.

Brain death and organ transplant concerns aside, I couldn’t help but feel sad after watching this. Yes, it’s a fictional story, but it shows the way that many people today think. They put animals on the same level as human beings. Or worse, they put animals above humans.

Animals are wonderful. That’s definitely true. And we can learn a lot from them. But they are not human beings. They do not have a soul, and they are not made in the image and likeness of God. Thus, they must never take more importance than a human.

As I thought about this disconnect, I decided to look up laws that protect animals. There are many. One in particular caught my eye. According to the Animal Legal Defense Fund, the Preventing Animal Cruelty and Torture Act “makes some of the most egregious forms of animal cruelty—specifically crushing, burning, drowning, suffocating, impaling or sexual exploitation—in or affecting interstate commerce or within the territorial jurisdiction of the United States a federal crime.”

This is a very necessary law, as cruelty to animals should never be tolerated. But why does this not translate to human beings?

Dr. Anthony Levatino, an OBGYN, once testified to this heinous way of killing a baby not yet born:

— Article continues below Petition —
The Quebec College of Physicians must not be allowed murder infants
Show Petition Text
4932 have signed the petition.
Let's get to 5000!
Thank you for signing this petition!
Add your signature:
Show Petition Text

Let’s be clear: It’s a federal crime to crush an animal, but tearing a baby apart is advocated for not only by our president, but by lawmakers, judges, governors, and countless others.

If this doesn’t make you sick, I don’t know what will.

How did we get to be a society that values animals more than people?

We absolutely should protect animals, but protecting animals and not protecting humans makes no sense, and it demeans the dignity of humans.

Yet these not-so-subtle stories continually pop up on TV, on social media, in movies, and in books. Animals—especially baby animals—are seen as lovable, cute, and worthy of protection, while baby human beings are seen as burdens who can be thrown away if “unwanted.”

When we encounter these scenarios, we must speak up, for it we don’t, then this mentality becomes engrained—in our children, in our friends, even in our own minds. And then once this mentality is the norm, people stop thinking for themselves. The line between animals and humans gets a little more blurred, and the devaluing of humans becomes just one more thing we all accept without question.

Some may say that the episode was just depicting a cute story or that I’m making too much of this, but I disagree. An animal’s life was given more importance than a human’s, and that can never be something we just blindly accept.