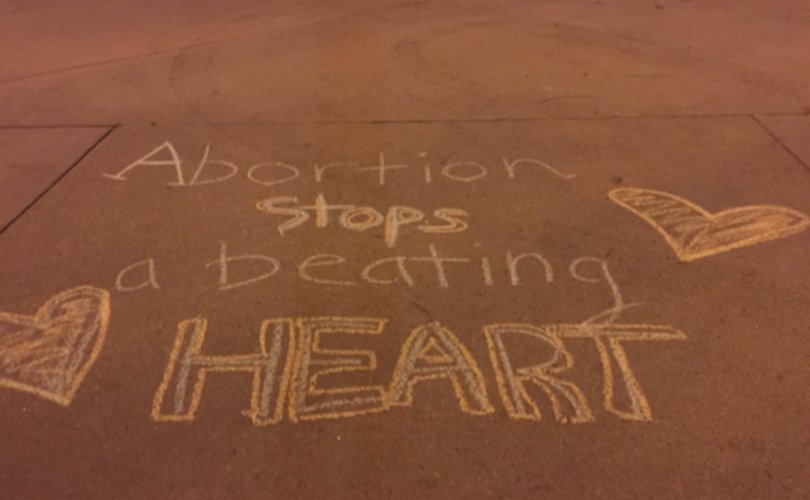 November 19, 2018 (LifeSiteNews) – It’s November 7 in South Dakota. The night is well below freezing. The Augustana University Republican and Life Runners clubs have teamed up and spent the evening chalking the sidewalks with messages defending the right to life.

These messages included Bible verses, statistics, and blunt proclamations in the hopes of stirring up a discussion on the Evangelical Lutheran Church in America (ELCA) campus. A discussion was what they got, but not before things began “slipping” toward madness and mayhem.

The pro-life messages were meant to be seen, and they were.

Unfortunately, pro-abortion students didn’t respond with principled statements and counter statistics, but a flood of water. These abortion supporters formed a bucket brigade and quickly doused the flames of revolutionary thought that risked changing minds.

A cool-headed observer could have warned them that water turns to ice in winter, but it was too late. Campus was now an ice rink, and Campus Safety was not amused. Officers were quickly deployed to spread salt, and a search for the “pro-choice” perpetrators began.

Blake Bendt, a local Republican, was astounded at the abortion supporters’ lack of forethought after he almost wiped out on his skateboard due to the ice. He was not alone. The Campus Safety log from the night indicates “reports of near falls and slips were numerous,” but no one was hurt.

In the school newspaper The Mirror, Lipinsky essentially dismissed the safety concerns from the ice, focusing instead on students’ delicate sensibilities and claiming the pro-life messages “crossed a line.”

“Hunter Lipinski, president of the Augustana Democrats, said he knows of five students who participated in erasing the messages and that ‘there may have been students a part of [Augustana Democrats] that took part. However, this had nothing to do with the organization,’” The Mirror reported. “Lipinski said he could not answer whether he participated and was asked by the students involved to avoid disclosing their identities.”

Corey Albrecht, president of the Augustana Republicans, said, “We recognize that these people are allowed to erase messages, just like we are allowed to write them. However, we are extremely disappointed with their conduct. Instead of defending their argument, they sought to censor our speech, before anyone even saw it. The officers of the Augustana Republicans would never allow our members to destroy any organization’s speech, much less lead a charge to do so. That gets us nowhere, as a campus or as a nation.”

Bendt added, “It is disturbing to see members of the College Democrats attack us for writing pro-life messages. We are calling on the school to condemn the attack and reaffirm our right to share our messages. In today’s heated political climate, we want to work [toward a university] where ideas are debated freely, calmly, and in a professional manner.”

According to Augustana’s Director of Campus Safety, Galen Smidt, the only requirement of using chalk on campus is that students do not write on buildings and avoid messages that contain swear words or obscene drawings.

“College Republicans and all pro-life students should feel comfortable sharing their views on campus, and colleges must act to ensure that the free-speech rights of all students are protected,” said Elizabeth Hill, Midwest Regional Coordinator for Students for Life of America.