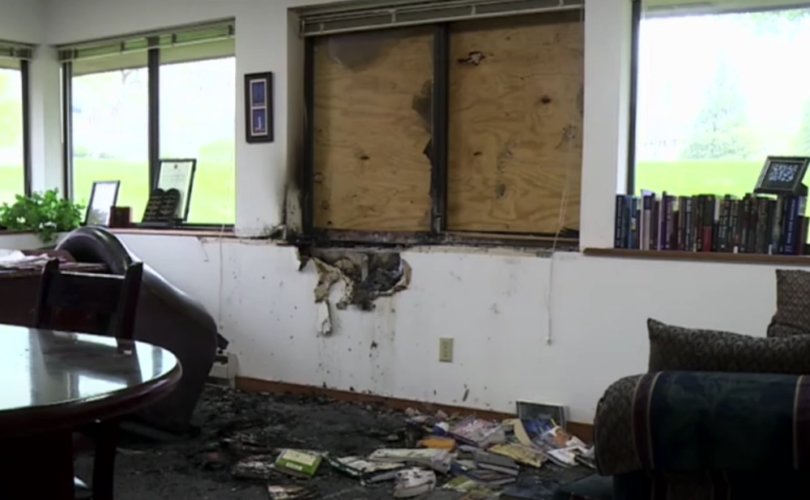 But you probably wouldn’t know that if you relied on the corrupt network morning and evening newscasts. They allowed a scant 77 seconds on Sunday and Monday, dropping the story all together by Tuesday morning.

ABC, CBS and NBC adopted a matter-of-fact tone to the firebombing and the dire threat (“If abortions aren’t safe, then you aren’t either”) spray painted on the wall of Wisconsin Family Action. CBS allowed just 18 seconds. ABC offered 20 and NBC came in first with a still-pathetic 39 seconds.

In Madison, Wisconsin, police say a Molotov cocktail thrown into the headquarters of an anti-abortion group, vandalized with a warning spray painted on a wall: “If abortions aren’t safe, then you aren’t either.”


On Monday’s Today, the just-the-minimum-facts reporting continued. Blayne Alexander insisted: “In every corner of the country, the fight over abortion rights is heating up. In Wisconsin, a Molotov cocktail was launched through the window of the headquarters of this anti-abortion rights group.”

By Monday’s CBS Evening News, Nikole Killion switched to a “both sides” spin:

The White House also condemned an attack on an anti-abortion organization outside Madison Wisconsin, Sunday, which is being investigated as an arson. And CBS News has learned law enforcement officials are monitoring threats from activists on both sides of the debate.

— Article continues below Petition —
PETITION: Call on Biden to condemn violent pro-abortion rioters across America!
Show Petition Text
20958 have signed the petition.
Let's get to 22500!
Thank you for signing this petition!
Add your signature:
Show Petition Text

ABC deserves the most scorn for its journalistic abdication. Just 20 seconds was given on Sunday’s World News Tonight and then the network went quiet (aside from overnight shows that aired at 3:30 and 4AM, respectively.)

Contrast all of this to the May 31, 2009 murder of Kansas abortion doctor George Tiller. The next day, NBC speculated that then-Fox News anchor Bill O’Reilly fueled the killing with “his blunt remarks regarding abortion and Dr. Tiller.”

On the June 1, 2009 Good Morning America, ABC ignored all the pro-life organizations condemning the murder. Instead, GMA Reporter Jeffrey Kofman highlighted glee from internet trolls over the slaying of the man who performed out late-term abortions. He announced, “On Twitter, one person wrote, ‘Oh, happy, day. Tiller the baby killer is dead.’ Another wrote, ‘God bless the gunman.’”

This type of color was missing in the reporting of the firebombing of a pro-life organization. No prominent liberals in the media were targeted for blame. No internet commenters were trotted out for culpability.

Sadly, the act of thuggish violence we saw in Wisconsin is not likely the end. LifeNews.com reported on May10 that a radical, pro-abortion group claimed responsibility for the Madison attack and has threatened, “This is our last warning.”

The networks have a responsibility to fully cover the despicable attempts to intimidate the Supreme Court and pro-life Americans across the country. Harassing citizens into complicity is not the way we do things in this country. And the press should call attacks like Madison for what they are: Terror.