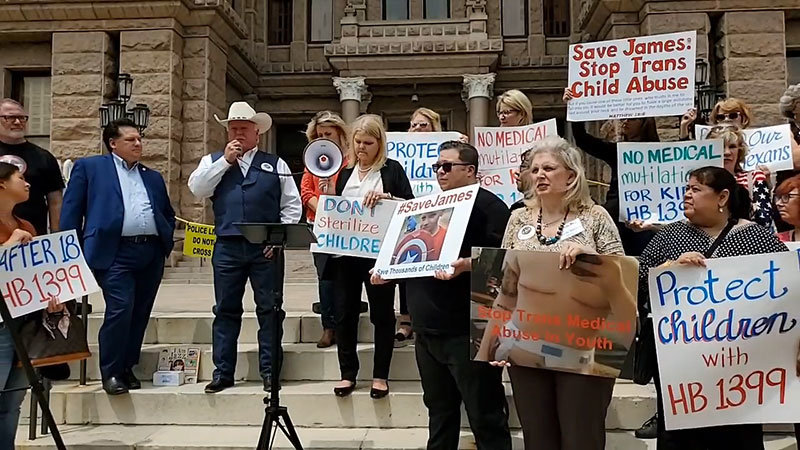 (Mass Resistance) – Texas MassResistance is leading the way back to normalcy.

On July 24 the Texas Tribune, a prominent left-wing newspaper, published a banner article “‘We failed’: Gay Republicans who fought for acceptance in Texas GOP see little progress,” describing how the Texas branch of the Log Cabin Republican organization, which pushes homosexual and transgender issues into the Republican Party across the country, was now admitting defeat in Texas.

But what was the tipping point? The Texas Tribune article specifically mentions the “anti-LGBTQ” language inserted into this year’s Texas GOP Party platform, despite LGBT-lobby objections.

At the 2022 GOP Convention held in Houston on June 16–18, Texas MassResistance delegates Tracy Shannon, the regional leader, and Kevin Whitt and their group were vocal and determined. They insisted that the strongly worded language regarding homosexual behavior which had been dropped from the state party platform in 2018 be re-inserted:

“Homosexual behavior is contrary to the fundamental truths that have been ordained by God in the Bible.”

The platform chairman finally agreed to submit a different but powerful phrase for a vote by the platform committee: “Homosexuality is an abnormal lifestyle choice.”

The debate on that plank was quite animated. A “gay” platform committee member and other “LGBT” people in the room vigorously objected to it, but Shannon, Whitt, and their group were not backing down an inch from insisting that the Texas Republican Party tell the truth. Their pro-LGBT opponents were unsuccessful – and our people were persuasive: the platform committee voted 17–14 in favor.

— Article continues below Petition —
Parents' Pledge: We will pull our children out of explicit sex-ed classes
Show Petition Text
4697 have signed the petition.
Let's get to 5000!
Thank you for signing this petition!
Add your signature:
Show Petition Text

Next, the plank had to pass a floor vote of the full GOP Convention. The pro-LGBT contingent was fully organized to stop it; however, Shannon, Whitt, and the Texas MassResistance team outworked them and were more vocal. The convention overwhelmingly passed the resolution.

That victory was devastating to the pro-LGBT lobby. Within a week, the chairman of the Texas Log Cabin Republicans resigned, blaming the new GOP platform language and a “path of divisiveness” and “lack of respect.” A few weeks later, the Texas Tribune “We Failed” article was published.

The full text of the plank on homosexual behavior (#143) in the Texas GOP Party Platform can be found here.

This was just the latest in a series of GOP platform setbacks for the pro-LGBT movement at the hands of Texas MassResistance.

In recent years, Shannon and Whitt have been successful in organizing efforts to insert language condemning transgender medical procedures on children, same-sex “marriage,” and “drag queen” readings to children – alongside inserting language supporting reparative therapy for those who suffer from same-sex attraction.

When that bill was derailed by the GOP leadership, Shannon publicized how the GOP Governor, Lt. Governor, House Speaker, and Attorney General had accepted hundreds of thousands of dollars in donations from the “transgender medicine” lobby.

All this activism ultimately helped prompt Attorney General Ken Paxton to rule that so-called “sex change” procedures constitute child abuse under existing Texas law and the Governor to direct the Texas Department of Family and Protective Services to investigate such “clinics” in Texas.

Although the Texas Log Cabin Republicans publicly claimed not to support transgender “sex-change” procedures on children, they appeared to do nothing to confront or try to dissuade those pro-LGBT groups and corporations which were supporting it.

There is a belief among conservatives that the LGBT movement is invincible. Not true at all!

A lot of thanks go to the Texas GOP Platform Committee for not wilting before political correctness or backing down in the face of anger from the pro-LGBT movement – and to the delegates on the convention floor for voting the right way. These grassroots folks are the kinds of Republicans people appreciate. But it also took strong, unrelenting efforts from Shannon, Whitt, and the other great activists.

On the other end of the spectrum are states like Massachusetts, where the Republican legislators – including both GOP candidates for Governor – have basically become watercarriers and advocates for the LGBT movement, and the State Party is too timid to take a stand on that issue.

We need to push every state GOP to follow the Texas example.