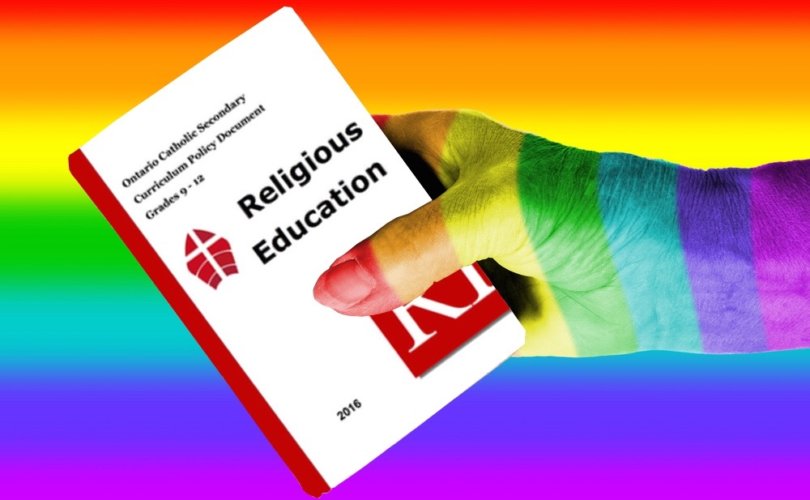 December 7, 2016 (LifeSiteNews) — Ontario’s Catholic Bishops made use of a pro-homosexual Catholic educrat in writing their new “Religious Education” program for grades 9-12 students in Catholic schools across the province.

Michael Way-Skinner of the York Catholic District School Board is listed at the end of the 283-page Ontario Catholic Secondary Curriculum Policy Document as a member of the 8 person “writing team.” The program, which was released online last week, was prepared by the Institute for Catholic Education, the Ontario bishops’ curriculum arm.

Skinner, who is his board’s coordinator for “Religious Education, Family Life and Equity,” told educators at a pro-homosexual educators’ conference last year his strategy of cherry picking through ecclesial documents dealing with homosexuality and pulling out the portions that provide what he called a “much richer dialogue” regarding people attracted to the same sex, while leaving behind everything he disagreed with. Skinner then related how he used these cherry-picked texts to convince those in power to promote what he called “positive and loving messaging to our [LGBTQ] students” within Catholic schools.

The portions in the bishops’ religion program dealing with homosexuality appear to be taken right out of Skinner’s playbook.

At no point does the program teach students about the immorality of homosexual acts, nor does it quote the Catechism of the Catholic Church where it teaches that “homosexual acts are intrinsically disordered” and acts of “grave depravity.” Instead, the program states via a teacher prompt: “How does our Church’s teaching on homosexuality demonstrate our Catholic understanding of the dignity of the human person? (Homosexuality is not chosen; homosexual orientation is not a sin; no unjust discrimination; we are to accept all persons with respect and love.)”

The program also fails to uphold Catholic teaching that calls the homosexual inclination “objectively disordered,” a teaching based on the evidence that the sexual drive is ordered toward male and female procreation. Instead, the program states in a definition of “sexual orientation” that the homosexual inclination “cannot be evaluated” since it is not a “moral act.”

At one point the program actually uses the word “intimacy” when asking students to explain the difference between “same-sex attraction and intimacy between persons of the same sex” and marital relationships between a husband and wife.

Instead of the religious program reflecting first and foremost the aims of God and his Church, it reflects the Ontario government’s 2009 “equity and inclusive education strategy.”

How much better would it have been for the students to be formed on the topic of homosexuality by the 11th century Italian Catholic reformer and Doctor of the Church Saint Peter Damian instead of left-leaning educrats kowtowing to political correctness?

Saint Peter Damian uncompromisingly preached the whole truth about God’s plan for sexuality and how terrible are the consequences, both temporal and eternal, to those who engage in what he called the “unnatural sexual practices” of homosexuality.

Following Scripture and the Tradition of the Church, Damian described homosexuality in his famous Book of Gomorrah as a “diabolical” corruption of God’s plan for sexuality between a man and a woman. He wrote that homosexuality must not only not be tolerated, but it must be condemned and stamped out, describing it as a “lethal wound festering in the very body of the holy Church.”

The religion program’s “inclusive” treatment of homosexuality is not entirely surprising given the outrageous statement outlining the program’s not-so-hidden agenda as found in the preamble, where it states: “All religious education courses reflect the aims of the equity and inclusive education strategy.”

Yes, you read that correctly. Instead of the religion program reflecting first and foremost the aims of God and his Church, it reflects the Ontario government’s 2009 “equity and inclusive education strategy,” a radical agenda massively opposed by pro-family groups because of its emphasis on normalizing homosexuality under the guise of embracing “diversity” and “inclusion” while at the same time combating so-called “homophobia.” The strategy eventually led to the Accepting Schools Act or Bill 13 (passed in 2012), what critics called a homosexual bill of rights that assaulted parental rights and religious freedom by forcing Catholic schools to accept homosexual clubs, if students requested them. To the astonishment of faithful Catholic parents across the province, Catholic leadership at the time meekly submitted to the requirements of the bill, a move that critics speculated was motivated by the threat of losing public funding of Catholic schools.

It is therefore not surprising to find the bishops’ religion program stating that it will help Catholic students identify “behaviours which may lead to unhealthy attitudes and relationships,” examples of which include “harassment, homophobia, bullying.”

It is also not surprising that since the government’s “equity strategy” promotes gender ideology — which holds that humans are not created as male or female but must choose how to express their sexuality, even when it is at odds with their biological sex — the new religion program must bend Catholic teaching, as much as it can, to follow suit.

The program borrows vocabulary and definitions from this ideology, even to the point of defining “gender” as “characteristics of women and men that can be socially constructed.”

Using the Skinner methodology of cherry-picking from Catholic teaching on the dignity of the human person while ignoring teaching about the male and female sexual difference inscribed in human nature, a teacher prompt in the program at one point states: “How can we use the Church’s teachings on the dignity of the human person to provide support to anyone who is working through their self-understanding in terms of gender identity and sexual orientation?”

WATCH: Teacher reveals how he convinced his Catholic school board to go pro-LGBTQ

Students are also taught to “critically analyse the presence of gender discrimination within the practices of various religious traditions” and are prompted by teachers to answer questions such as: “If something is not felt as gender discrimination for the believers of a tradition, is it right for those outside of the tradition to say that it is discriminatory?”

The preamble to the program makes it clear that “inclusive education” as propounded by the government and taught in the religion program means that everyone, regardless of “gender identity” or “sexual orientation” is “welcomed, included, treated fairly, and respected.” Not once do students learn the crucial difference between loving people who struggle with a disorder while hating the disorder they struggle with. Because of Skinner’s cherry-picking method the old dictum “Love the sinner, hate the sin” has no part in this program.

The Ontario government’s push to teach young people about giving “consent” to sexual relations also finds its way into the program, even though the paradigm of “legal consent” has little to do with the morality or immorality of sexual relationships. Teachers are prompted to ask students how “consent” can promote “healthy sexuality,” even though sex with consent does not make it morally right. Bending to the government’s agenda, the program bizarrely teaches young people that withholding consent is a way of remaining chaste instead of simply stating that sexual relations outside of marriage is the deadly sin of fornication (a word not mentioned once in the program) that jeopardizes one’s eternal salvation.

Catholic parents must not settle for lukewarm programs that can only create lukewarm Catholics.

Despite the program’s weak teaching on sexual immorality, it does provide students with authentic Catholic formation in other areas, including the sanctity of life (dealing with the problems of abortion, euthanasia, reproductive technologies), aspects of the moral life (human dignity, the common good, principle of double effect), the relevance of the Ten Commandments in the moral life, and the sacramental life of a Christian. The program uses the Catechism of the Catholic Church as one of its primary sources and even makes use of St. Thomas Aquinas and Aristotle in various places. It teaches about the Rosary, litanies, and Eucharistic Adoration.

While there are many laudable elements in the bishops’ religion program, it nevertheless remains the case that the program is trying to serve two masters, God and the government. And, as the Gospel says, it will either “hate the one and love the other, or [it] will be devoted to the one and despise the other” (Matt. 6:24). It is not difficult for the casual reader to determine which master the program ultimately serves.

One part of the program teaches students about how to “assess texts for bias and perspective.” Well, with the program stating that it “reflects the aims” of the government’s homosexual agenda, with the evidence of Skinner’s cherry-picking approach to homosexuality throughout the program, with the program’s acceptance of “gender ideology,” and with its notions of a sexual morality based partly on notions of legal “consent,” all of these elements reveal a non-Catholic bias that makes the program unworthy of Catholic students who deserve the full truth, and nothing but the full truth, when it comes to Catholic teaching.

Jesus said: “If you love me, keep my commandments” (Jn. 14:15). If students are not told fully what those commandments are, especially in the area of sexual morality, then everyone involved in their formation — including parents, bishops, and educators — is doing them a huge disservice that might very well negatively affect their lives and could even result in a detrimental eternal consequence.

Catholic parents must not settle for lukewarm programs that can only create lukewarm Catholics, who being “neither hot nor cold,” as Christ says, will be “spew[ed]…out of my mouth” (Rev. 3:16). In today’s confusing world where every form of immorality and licentiousness is tolerated and even promoted, young Catholics need black and white answers to moral questions, not fifty shades of grey.

Pete Baklinski has a B.A. in Liberal Arts and a Masters in Theology with a Specialization on Marriage and the Family (STM).