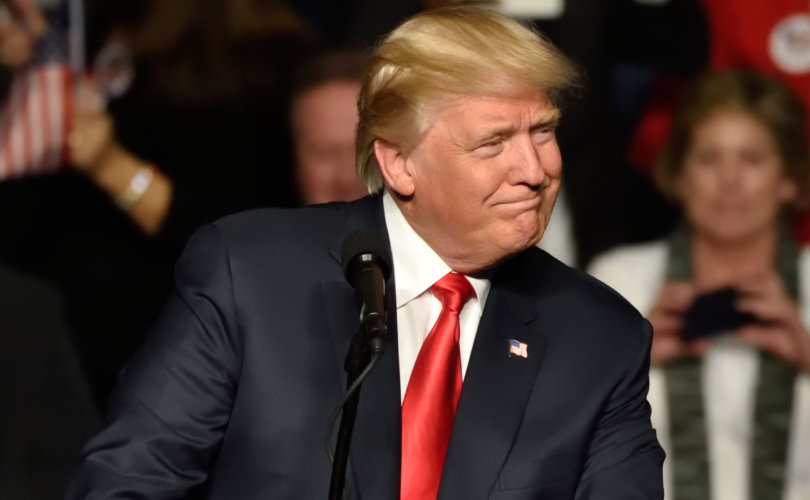 August 24, 2020 (LifeSiteNews) – “The choice is simple: Catholics must support Donald Trump’s re-election” as president, concludes leading Catholic political commentator Austin Ruse in his new book, The Catholic Case for Trump. With important insight for not just Catholics, Ruse conclusively proves that Trump “stands for ordinary Americans, common sense, and traditions” as the “last bulwark against a radical Left that wants to destroy our way of life.”

A brief Trump biography sets the tone for Ruse’s subject. A New York real estate dealmaker, “Trump grew up on construction sites with rough men who spoke Queens English, not the Queen’s English.” He thus has no “immediate need to be liked by the Georgetown and Kalorama set” of Washington, D.C. high society.

Trump was a godsend to conservatives who have grown “weary of cowardly Republicans who refused to take on the left’s stifling political correctness,” Ruse noted. This “rather plainspoken, gruff, and often hilarious non-politician came along who knew the enemy, never gave an inch, and always gave back 10 times more than he got.” “Sure, sometimes he shoots himself in the foot,” conceded Ruse, but, as President Abraham Lincoln during the Civil War said of Union General Ulysses S. Grant, “here was a man who fights.”

Trump “is no paragon of moral virtue,” Ruse also confessed, but he ranks policy character over past private behavior. President Barack “Obama was considered a model family man and father without a whiff of personal scandal, but he was monstrously evil when it came to public policy.” The Bible’s flawed Samson “teaches that God has a plan, and that sometimes he chooses someone we consider to be the wrong vessel.”

Regarding Obama, “future Democrat administrations will certainly make him look like a moderate,” Ruse warned. Democrats are “all in on the culture war. Today, the abortion industry and the LGBT movement are the two most powerful constituencies in the Democratic Party.”  Accordingly, “Democrats weaponized the levers of power at their disposal against dissenters from their disordered sexual morals.”

By contrast, Trump has “advanced the most pro-Catholic agenda in recent memory,” Ruse documented. Particularly, “abortion, one of the gravest injustices known to man, is the most important priority for Catholics.” He dismisses attempts to relativize this evil, for “if we were killing almost a million refugees a year, the Catholic Left would roust itself to argue that that was the preeminent issue of our time.”

Trump was probably previously “nominally pro-choice” but has surprisingly evolved for Ruse. He catalogues how Trump has become the “most pro-life president in history,” such as with respect to the Republican Mexico City policy. He expanded this prohibition of American aid to international organizations promoting abortion from roughly $600 million to nearly $9 billion of government funds.

Trump has also won Ruse’s praise in opposing LGBT goals. “Trump has a history of supportive words regarding homosexuality” such that “some faithful Catholics will be disappointed.” Nonetheless, “Trump still draws a line at the imposition of the gay and transgender ideology upon the American people and our institutions.”

Trump has, for example, opposed transgender agendas in the military and public schools. That is supremely important to Ruse, for the “Right has to destroy a radical gender ideology that threatens to upend the basis of human life as we know it.” Trump must often contend with a “social liberal deep state,” where the “career staff of the federal government in all the agencies has been flooded with homosexual advocates and activists.”

Equally vital for Ruse, Trump “has already put his stamp on the federal judiciary in a way that will rival any president in history,” including two Supreme Court appointments. “For several decades, Republicans have lost just about every culture war battle through the courts” as “Democratic presidents appointed wildly ideological judges,” Ruse noted. With Trump’s judicial appointments, “seven of 13 circuit courts have durable conservative majorities,” and a re-elected Trump would have a good chance of replacing on the Supreme Court the “ancient Ruth Bader Ginsburg (born in 1933).”

Trump’s accomplishments often do not win him praise from the Catholic Church hierarchy due to political biases, Ruse observed. American bishops and their staffers often have views “little different from the garden-variety leftism you’re bound to find on college campuses, where young students are indoctrinated in anti-Catholic morality.” Yet “Catholics are free to practice their own prudential judgment” on a range of non-doctrinal issues.

In particular, for the left, Catholic or otherwise, the “trump card against Donald Trump is immigration,” Ruse wrote. Yet the “Church does not teach open borders, even remotely,” and Pope Francis has “said it is not Christian to build walls, failing to point out that the Vatican has very high walls with guards at each entrance to Vatican City.” “Immigration is a very complicated issue, filled with as much nuance as any federal policy debate,” Ruse qualified.

Similarly, “(s)ome, perhaps most, in the Catholic hierarchy are all in on catastrophic man-made climate change,” Ruse noted. “No doomsday evangelical from previous centuries had anything on these guys.” Yet American greenhouse gas emission levels are almost the same as in 1990, and Francis himself recognizes “that the Church cannot settle scientific questions.”

Meanwhile, “Trump has conducted himself in foreign affairs in accord with standards Catholics ought to accept,” Ruse wrote, such as a “high threshold for war.” Concurrently, domestically, he debunks accusations that Trump is racist, like the ubiquitous lie that he praised white supremacists after a 2017 rally in Charlottesville, Virginia. The “Left is doing to him what they do to you, using racism as a slanderous epithet against someone they disagree with politically,” Ruse analyzed.

Ruse makes his compelling case within the context of Catholic voters, who have become a key swing vote in modern American elections. “Democrats will try every dirty trick to get Catholics to abandon Trump because they know that Catholics in the Rust Belt are essential to Trump’s electoral coalition,” Ruse wrote. Thus, for all conservatives, the stakes in taking Ruse’s Catholic analysis to heart could not be higher.