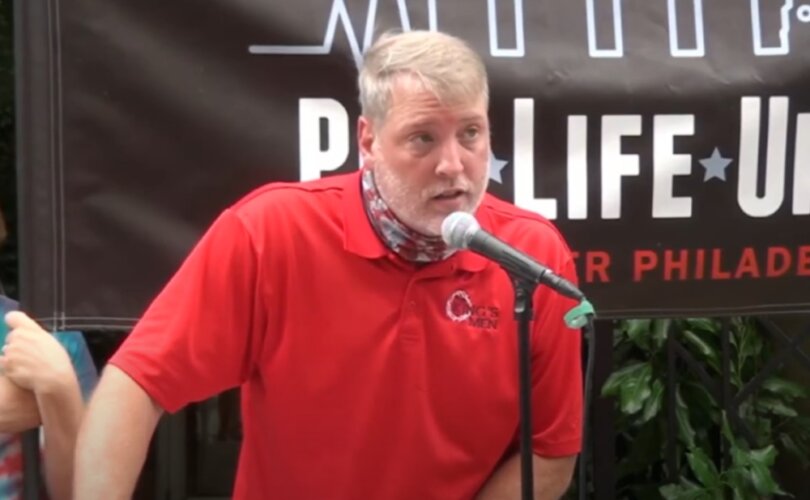 (LifeSiteNews) — Pro-life Catholic father Mark Houck, whose family was traumatized last year after heavily-armed FBI agents carried out a dawn raid on their home, will go to trial Tuesday.

The trial could be one of the most significant in the post-Roe pro-life movement – but it should never have happened. It’s a cruel persecution carried out by an administration that has weaponized its federal powers to target pro-life conservative Americans.

On Saturday, I had the chance to speak with Peter Breen, the lead attorney in the upcoming trial. Breen, who’s with the bulldoggish conservative legal group the Thomas More Society, explained the anticipated structure of the trial, set to conclude on Friday, and talked about some of the difficult and important work of compiling all the necessary information and building up a solid defense.

The team has a strong case, and they’re confident in it. But they also know that much rests on the grace of God, and they humbly ask for your fervent prayers.

It’s a critical legal battle — one that Breen suggested is among the biggest pro-life cases of the century, and certainly the largest in the new post-Roe era.

— Article continues below Petition —
Stand with Mark Houck, a pro-life Catholic dad of 7 raided by Joe Biden's FBI
Show Petition Text
7988 have signed the petition.
Let's get to 9000!
Thank you for signing this petition!
Add your signature:
Show Petition Text

The outright persecution of pro-life Christians in modern-day America

By now, most LifeSiteNews readers are probably well aware of Houck’s story, which was broken by LifeSite reporter Patrick Delaney and swiftly earned a place front-and-center in the national news cycle.

As LifeSite reported at the time, heavily armed FBI agents surrounded the Houck family’s rural Pennsylvania home in the early morning on September 23, 2022, terrorizing their seven children before taking Houck into custody.

The arrest stemmed from an alleged altercation between Houck and an abortion clinic “escort” outside a downtown Philadelphia Planned Parenthood abortion facility last year when Houck, a pro-life sidewalk counselor, was protesting the murder of unborn babies along with his then-12-year-old son.

The federal government under the vehemently anti-life Biden administration allege that Houck assaulted the employee, Bruce Love. But Houck’s attorney and wife say he pushed the man to protect his son, whom the man had been repeatedly “harassing” over the span of several weeks using “crude … inappropriate and disgusting” language.

Houck now faces two felony charges of violating the Freedom of Access to Clinic Entrances (FACE) Act, which could lead to up to 11 years in prison and fines totaling as much as $350,000. He has been ordered to surrender or refrain from obtaining a passport or firearms as a condition of his release on $10,000 bail.

This trial should never have begun

The fact that a God-fearing, patriotic husband and father can be raided by federal law enforcement and charged with multiple felonies because he was advocating for life outside of an abortion mill and then protected his young son from a pro-death abortion worker is nothing short of appalling.

It’s especially horrendous when we consider that the raid on Houck (which was followed up with a similar raid against another Catholic pro-life dad, Paul Vaughn), came amid a stunning lack of serious law enforcement action against the pro-abortion radicals who vandalized pregnancy centers and threatened pro-life counselors in the lead-up and aftermath of the Dobbs v. Jackson Women’s Health Center case that resulted in the landmark overturning of Roe v. Wade.

Moreover, there is crucial evidence to suggest that whatever scuffle ensued between Houck and Mr. Love has nothing whatsoever to do with the FACE Act, and therefore should never have been a matter for the federal government.

As Thomas More Society public relations president Tom Ciesielka wrote in a January 18 piece published by LifeSiteNews (and which Breen affirmed to me in a phone conversation Saturday), new evidence uncovered by the conservative legal team suggests that the Biden administration’s goons may have no case at all against Houck.

As Ciesielka wrote, “when the United States Congress passed the Freedom of Access to Clinic Entrances Act, it expressly intended to exclude so-called ‘escorts’ operating outside of abortion facilities from being encompassed by the FACE Act.”

In court transcripts reviewed by the Thomas More Society, Democratic Sen. Ted Kennedy of Massachusetts, chief sponsor of the FACE Act, said unambiguously that “Demonstrators, clinic defenders, escorts, and other persons not involved in obtaining or providing services in the facility may not bring such a cause of action.”

Could it be more clear?

Breen said that after their findings with regard to the FACE Act were brought before the court, the Biden administration was given a chance to respond — something they never did.

He said that while most of his experience is in civil, rather than criminal, law, he couldn’t “remember the last time a judge offered” the U.S. Justice Department “the opportunity to respond, and they didn’t take it.”

“What does that indicate to you?” I asked.

LifeSiteNews will be reporting on the Mark Houck trial to bring readers the latest updates. Those interested are also invited to go to the Thomas More Society’s website.

Most of all, readers are asked to pray for the legal team representing Houck, as well as for Houck himself, his wife, and their young children.