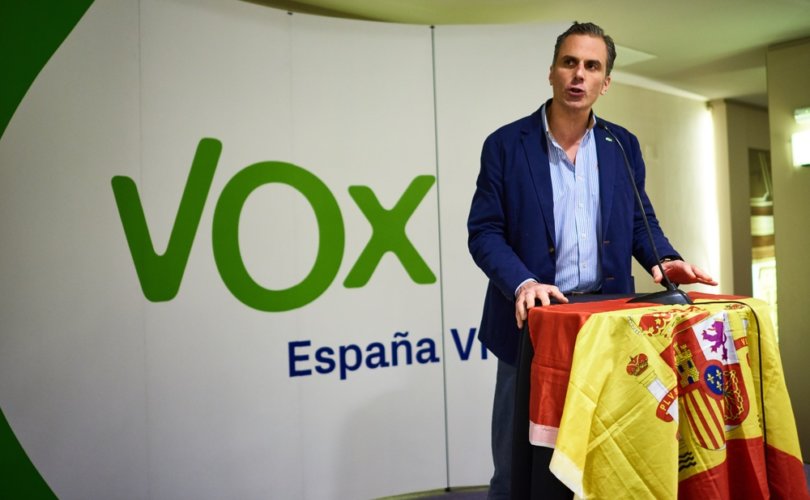 SPAIN, December 4, 2018 (LifeSiteNews) – The French philosopher Joseph de Maistre wrote that a counter-revolution is not the opposite of a revolution, but instead an active opposing revolution.

The latest signs of the opposing revolution to modern secular globalism came on Sunday, when elections in Andalusia – Spain's most populous autonomous community (similar to an American state) – handed the Spanish Socialist Party (PSOE) its first defeat there since the modern constitutional era (1982).

The rise of an unapologetic God and Country counter-revolution to secular globalism is a reality in North America (United States), South America (Brazil), Eastern Europe (Hungary and Russia), and now, as the election in Andalusia proves, even in parts of Western Europe.

This anti-globalist counter-revolution is often identified with a worldwide “Trump effect.” The comparison is appropriate not so much for who Trump is as an individual, but for the broad constituency who President Trump represents. In the post-soviet modern era where cultural marxism was vanquishing Western civilization with an effectiveness that the red army never could have dreamed of, Trump's unlikely victory over the cultural marxists of the modern Democratic party has given hope to many patriotic people around the world who are not comfortable exchanging their own national identity for Obama's utopian global citizenship.

Even after the victories of Donald Trump, Viktor Orban, and Jair Bolsonaro, the monolithic liberal media continue to be incapable of believing that this counter-revolution is not an isolated, redneck phenomenon.

Pollsters completely failed to predict the election results in Andalusia, which allowed center-right parties, along with the new pro-life conservative Vox party, to gain enough seats to oust the Socialist party from its perennial seat of power in the southernmost and most populous region of Spain. And yet, the results could have been foreseen by any objective observer with a knowledge of 20th century Spanish history.

For Spain, the 20th century was one in which anarchists and marxist revolutionaries attempted to replicate Russia's revolution (complete with genocidal anticlericalism) but were defeated by Catholic traditionalists and fascists during the Spanish Civil War. After containing the marxist threat, Francisco Franco, the victorious Spanish general turned dictator, focused on creating a prosperous Spanish nation unified by Catholic traditions. As opposed to other dictators of the 20th century (Stalin, Mussolini, Hitler, Tito, etc.), Franco succeeded in lifting his nation from poverty and creating a unified nation capable of transitioning to a democratic monarchy. And while the role of the military was always an important one during the dictatorship, Franco did not create a militaristic state. Ultimately though, the traditional Spain of the 1950's and 60's would prove no match for the ravages of cultural marxism, which would claim Spain as one of its many Western European victims.

Like all marxists, as soon as Spanish cultural marxists gained power, they attacked traditional institutions in order to ensure long term power for themselves. Nowhere in Spain were the marxists more successful at this fundamental transformation than in Andalusia, where despite chronic astronomically high unemployment and a generalized societal atrophy, the Spanish Socialist Party retained power for almost 40 years.

All of this came to an end last Sunday, and the main reason is the emergence of the Spanish Vox party. Uniformly categorized by the international media as an anti-immigrant, far-right party, it is instead an openly pro-life and patriotic Christian conservative party that has filled the void left by the timid and morally ambivalent establishment center-right party known as the Popular Party.

When one looks past the liberal media spin at the actual platform of the Vox party, the fundamental components of basic constitutional conservatism are evident. On the economy, Vox proposes to keep taxes to a minimum and eliminate regulations that limit business development and growth. On social issues, Vox advocates for strong families and traditional views on marriage and strong religious liberty protections. They call for an end to abortion and the defense of the right to life.

On sovereignty, Vox proposes tighter immigration controls, especially with North Africa, as well as the total rejection of Catalan and basque separatism. On education, Vox is proposing school choice so that parents can decide where to send their children to school. There are some aspects of Vox that are unique to Spanish conservatism and do not translate directly to traditional conservatives in the United States or in other parts of the world, but the basic recipe is there: God and Country.

Also familiar to any American conservative are the profiles of the newly-elected representatives of the Vox party. One is a retired policeman, another is a doctor and mother of seven children, another is a housewife. There is a family law attorney and an experienced politician who changed party affiliation from the center-right to Vox; another is an IT professional and yet another is a small businessman. In essence, it is a cross section of a traditional Spain that for the first time in 40 years of democracy has the ability to vote for a party that represents their values, not those of a European or global elite.

On the national level, the election in Andalusia is important because it constitutes a strong rebuke to the recently appointed Socialist prime minister, Pedro Sanchez, who came into power in June by impeaching the previous center-right prime minister with the help of the radical marxists and the regional separatists. Spanish media are currently reporting that Prime Minister Sanchez will most likely be forced to call for snap elections in order to be able to continue governing next year.

On a global scale, the election in Andalusia, while not as important as Trump's or Bolsonaro's, is important because it shows that cultural marxism is no longer hegemonic, even in the heart of Western Europe. The movement for national sovereignty and traditional values is beginning to come of age and is showing the marks of a worldwide counter-revolution.