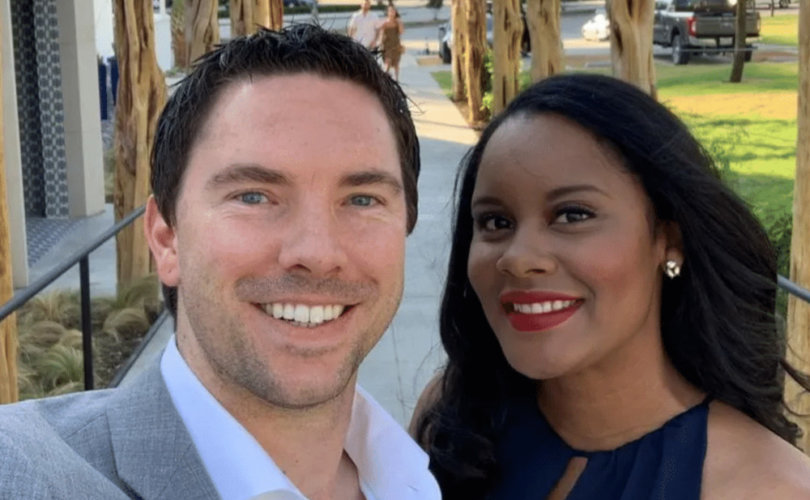 DALLAS, Texas, October 15, 2020 (NIFLA) — Raven Henson is no stranger to challenges. So, when COVID-19 hit, she was able to make the best of the circumstances.

Raven and her husband Cole recently went through hurdles with the City of Garland, Texas, and their Planning Commission and City Council about the Henson’s decision to transform their house into a pregnancy center, as NIFLA previously reported last year.

The city’s final decision was made on December 3, 2019. Thankfully, it was decided that plans for the center would be allowed to move forward.

Raven said a lot of renovations were needed for the house to become a center. However, prior to the hearing they weren’t able to do any work because the city had not approved the use of the location.

After the December 3 hearing, they were able to complete a sunroom addition to the house, and poured concrete for the seven parking spaces that the City required. They continued to make progress up until February, “and then COVID hit!” Raven said.

Dallas had a mandatory stay-at-home order, so all work towards getting the pregnancy center up and running such as remodeling came to a stop. In Raven’s words, “it just really put everything to a hold.”

Raven and her family wondered what they could do to help their community, because people were afraid to leave their houses, and they live in a low-income suburb of Dallas, so funds were tight for people.

The Hensons reached out to the local food pantry and asked what the needs in the community were. Raven said that many in her community were experiencing job losses, especially because a lot of blue collar and domestic workers like housekeeping trades came to a halt.

Raven also noted that they have seen firsthand the people being impacted, and it’s the poor. “These people are struggling and suffering,” she observed.

Raven’s center had a lot of diapers, wipes, and formula on hand, so they asked the local food pantry if they had a need for any of those items. The center director and her husband got proactive and made a sign and flyers as well as called the local WIC office. Thanks to these efforts, the pregnancy center “became an essential location for diapers, wipes, and formula,” she explained. They also prayed for people and gave out bibles. Raven added that the center served well over 300 families from March through August of this year.

“We’ve really been able to experience the highs and lows of COVID through people,” Raven commented. She also shared that these efforts opened up an opportunity to talk about Jesus, especially with churches shut down. Raven added, “in [a] crisis, people want prayer.”

The people in their community who weren’t already part of a church didn’t have an outlet at all. Raven and her family were grateful they were able to minister to people who had no access to ministry during the pandemic.

Along with their distribution of diapers, wipes, and formula, Raven and her husband also housed a single mother with three children who was expecting her fourth child. She was sleeping in her car and needed a place to stay, so the Hensons decided to take them in.

“For us it seemed like a no-brainer … How could we not do that?” The mother and her children stayed with the family from April to July. “It’s been an interesting year,” Raven noted. “It’s not at all what we thought we’d be doing, this time last year.”

“We are in desperate need of a medical director,” Raven remarked, adding that they need a pro-life physician who has a heart for this work. The center already has an ultrasound machine.

“Things are looking up, we’re excited about getting this project done so we can move forward with that,” Raven said.

The final project that the Hensons need to finish is renovating their garage. The Hensons have been living in the house that will become the center, but the rooms they are staying in now will be converted into clinical rooms. So, the Hensons are moving out of the 100-year-old, 3,000 square foot home, and into the 750 square foot garage. But first, the garage needs work such as plumbing, framing and sheetrock for walls.

NIFLA leadership fully supports Raven Henson and her goal of serving women and children in her community. We will continue to monitor the situation and share updates while providing assistance in any way we can. We would also like to encourage our supporters and friends in the pro-life community to pray for Raven, her family and Living Hope Solutions — especially in the coming months as they prepare for their center’s opening. Please visit www.livinghopesolutions.org to learn more about Raven’s mission and how you can help.

To learn more about NIFLA’s role in protecting the work of pregnancy centers like this one, please visit nifla.org and our “About NIFLA” page.

Published with permission from National Institute of Family and Life Advocates (NIFLA).