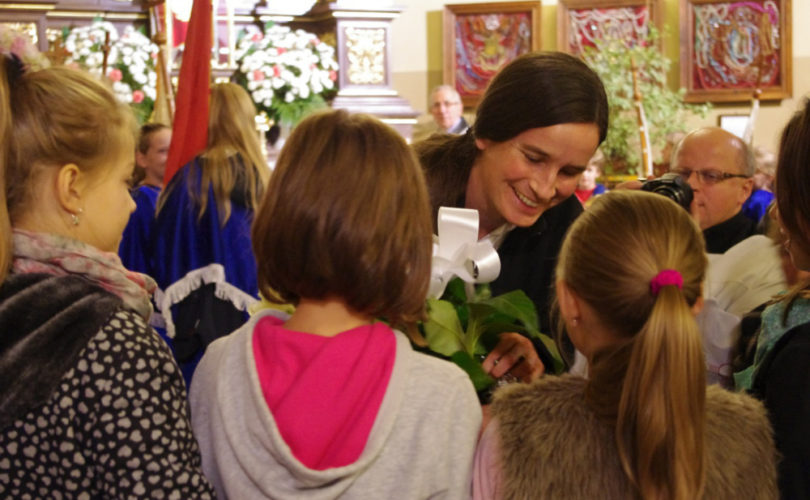 Throngs of adoring fans gave frequent pro-life prisoner of conscience Mary Wagner a rock star’s welcome in Poland this month as she visited 26 cities in a whirlwind two week tour.

But Wagner is no rock star; she is a Canadian pro-lifer who spent nearly two years in an Ontario jail, before her release this June, for her work outside of abortion clinics.

Wagner was imprisoned for disturbing the business of an abortion clinic in Toronto, Canada. She was trying to talk to women entering the clinic, and gave each a rose. She remained in prison because she refused in conscience to agree to a bail condition that she stay away from abortion clinics. This very quiet, sensitive, and contemplative woman was treated as a menace by the Canadian judicial system.

Given how many churches and places of worship Mary visited in Poland, she would probably call her journey a pilgrimage rather than a tour. Nonetheless, this is what organizer Jacek Kotula called it. Wagner’s Polish visit, which took place from October 3 to 16, is described on the Facebook page ‘Mary Wagner W Polsce.’

Wagner’s sister Sarah followed her tour in Poland via Facebook, writing: “These photos and videos make me so proud of the Polish people… I wish Mary could stay there and be among so many loving friends!! In Poland she is greeted with roses and love. At home in Canada she is greeted with handcuffs. Thank you for welcoming my sister.”

Seeing many people at Mary’s meetings, especially children, Sarah aptly commented: “Mary is a spiritual mother to so many…”

No wonder that in the small town of Siemysłów, Wagner received a red carpet reception—a real red carpet pulled over the grass and fireworks. In total, Kotula estimated that about one million Poles heard her speak.

“Regular people recognized her on the streets,” Kotula said. “One day we were going to see Cardinal Dziwisz in Cracow, and a passerby stopped and asked her if she was the Mary Wagner.  A moment later, another one told her that her picture was in today’s paper.  And the same day, when we were going to St. Mary’s Church (one of Cracow’s main tourist attractions), a Polish couple from Canada approached to spontaneously embrace her.”

Kotula, a jovial and courageous 48-year-old, was fascinated by Mary Wagner the minute he heard about her. Kotula is an activist from The Right to Life Foundation (Fundacja PRO- Prawo do Życia) who organized 60 anti-abortion street exhibits in his region. He wrote to Mary and invited her to Poland while she was still in jail.  She was freed in June, and after some thought decided to accept the invitation.

News of her arrival sparked excitement throughout the country. “Polish people need this type of witness who shows humility, simplicity and prayerfulness,” Kotula said.

Kaja Godek, from the Warsaw board of the Right to Life Foundation, explained:  “We needed her to talk about not being indifferent and silent when unborn children are being killed. We needed her to repeat that we have to fight, even if a personal sacrifice is demanded from us.”

Wagner’s visit comes during a year in which increasing numbers of Poles are paying a high price for defending unborn children. The Right to Life Foundation itself had enough lawsuits—more than 10—to become the most sued organization in Poland. This year a midwife, Agata Rejman, was threatened with legal action for revealing that Pro-Familia Hospital performs abortions (Wagner visited Rejman during her stay in Poland to give her courage). Additionally, Professor Bogdan Chazan lost his job as director of a hospital for refusing a referral for an abortion. Finally, Kotula himself has to fight three lawsuits after exposing the truth about killing the unborn.

During her visit in Poland, Wagner visited many schools and universities. She met with politicians as well as children in a kindergarten run by nuns. Everywhere she went, the crowds were waiting. After a meeting with her in Gdansk, a line of people waited one-and-a-half hours to personally thank her. In Cracow, she had an emotional meeting with a Ukrainian nurse, also named Mary (Maria), who had come especially to meet Wagner and talk to her about abortion in Ukraine. Wagner’s visit touched not only Poles and Ukrainians, but also Croatians.  They watched online as Wagner attended mass in Jasna Góra Monastery where the famous icon of Black Madonna is on display.

Wherever she went, Wagner discussed the lack of legal protection for unborn children in Canada, the actions of Operation Rescue, her jail time, her friend Linda Gibbons, who also spent a lot of time in jail, and her family. She appeared on Catholic television (TV Trwam), and gave countless interviews.

She visited a shelter for single mothers, took part in a March for Life, and participated in a demonstration with abortion pictures in the center of Cracow.  She had meetings with archbishops and bishops, seminarians, religious sisters and brothers, as well as Cardinal Stanisław Dziwisz, who gave her relics of Saint John Paul II for her parish.  In Łańcut, she met a Polish-born Canadian bishop emeritus of Hamilton, Matthew Ustrzycki, who still speaks Polish very well.

Wagner also visited the grave of St. Hyacinth in Cracow. In Białystok, she went to the cemetery where 176 unborn children were buried.  In a little town named Markowa, she went to pay respects at the grave of the Ulma family, who were murdered by Germans for saving a Jewish family. The mother, Wiktoria Ulma, a mother of 6, was in labor while she was shot. Her unborn child is commemorated on the grave’s plaque, and the whole family will be beatified soon.

Wagner also saw a movie about her fight, made by Grzegorz Braun. The documentary, “Not About Mary Wagner,” was shown three times in different cities. The title expresses Wagner’s unwillingness to be in the spotlight. The movie will be shown in Canada and in the United States in February 2015. DVDs of the film are sold for 5 zł each (less then $2) to reach as wide an audience as possible. (The trailer can be seen here.)

Mary Wagner’s message to Poland echoed the words of Saint John Paul II: “Do not be afraid of defending life, be not afraid of bringing the gospel of life in the streets.”  Thanks to Mary, there are now more people who will have the courage to continue the struggle.