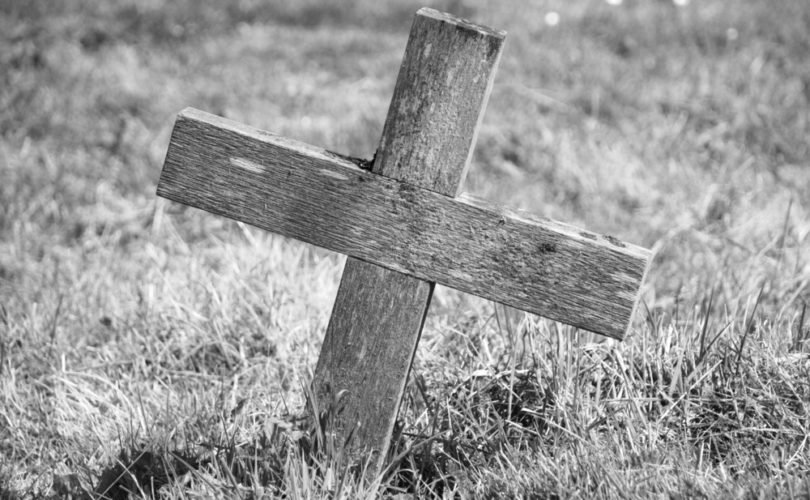 June 15, 2015 (NationalRighttoLifeNews) — A tiny blue silk flower is the only marker that memorializes the gravesite of 47 babies who lost their lives at the hands of notorious Philadelphia abortionist Kermit Gosnell.

Pro-lifers recently discovered that the City of Philadelphia cremated and buried the babies more than a year ago in an unmarked plot at the Laurel Hill Cemetery in Philadelphia.

On Wednesday, some of our staff joined about 60 people at the gravesite for the first memorial service to honor and remember these tiny victims of Kermit Gosnell.

The short service began with a press conference and then a procession to the grave site.

The group placed white crosses and flowers on the unmarked ground where the babies were buried. The pro-life group Philly Alive also placed a temporary marker in the ground, which read, “May God welcome the souls of these children killed by Kermit Gosnell, and the souls of all children killed by abortion into the joy of Heaven.” However, the gravesite is owned by the city, so all the markers had to be pulled up again before we left.

Catherine Foster, an attorney for Alliance Defending Freedom, reminded the crowd: “These babies were like any other … precious little persons. How a person dies doesn’t make anyone less human.”

“Today, we can say that the City of Philadelphia has heard us,” Foster said. “They gave these babies a place to be buried.”

And what a significant place it is. Though the babies’ gravesite is currently unmarked (something pro-lifers hope to change in the near future), their bodies are resting in one of the most important cemeteries in the United States. According to cemetery information, important war heroes, influential politicians, visionary artists and inventors, and industrialists are buried in its grounds.

At the gravesite, the Rev. Patrick Mahoney, director of the Christian Defense Coalition, led the short service of songs and prayers. Mahoney encouraged the group to continue working to protect babies from abortion and not allow the Gosnell tragedy to be “swept under the carpet.”

The burial and memorial of the 47 babies is something that many pro-lifers have been attempting to do for years.

The babies’ bodies were taken from Gosnell’s disgusting abortion center after the state shut down his murderous practice. Gosnell kept the babies’ bodies in plastic containers on shelves and in the freezer.

After Gosnell’s trial, several pro-life and religious groups attempted to claim the babies’ bodies to give them a proper burial; but the Philadelphia Medical Examiner’s office denied their requests.

In June 2013, the Philadelphia Medical Examiner’s office revealed that it planned to cremate and bury the babies’ bodies, but did not say where they would be buried. Until now, no one knew.

Bill Doran, the superintendent of Laurel Hill Cemetery, said the babies were buried about a year ago in a respectful manner, including a prayer service attended by cemetery staff.

The Philadelphia organizers said they also hope to organize a second, large-scale memorial service for the babies in September.