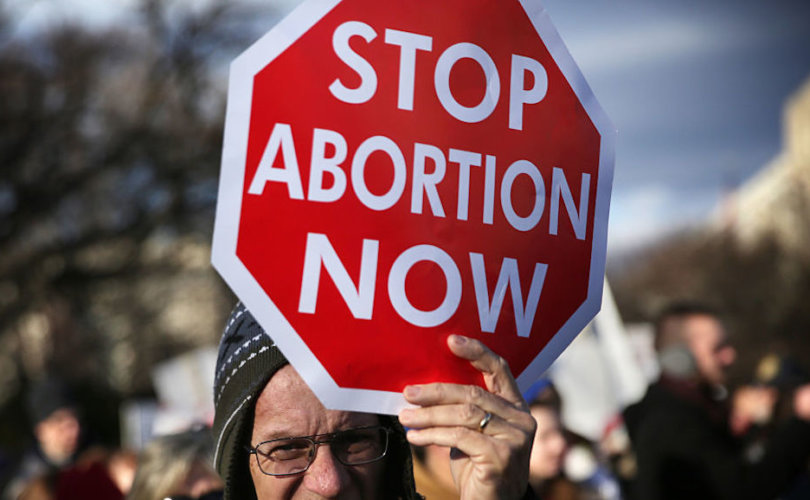 (LifeSiteNews) – The defeat of the state ballot measure about abortion in Kansas has the liberal establishment ablaze with talk about the need to take the middle route in a post-Dobbs world.

If solid-red Kansas rejects the strong anti-abortion option, they argue, the position clearly has no future. Leftist commentators claim the right must “rethink” its strategies and moderate its pro-life position to accommodate a frightened electorate.

READ: Here’s where abortion is banned or protected in post-Roe America, with new interactive map

Republicans with liberal proclivities joined in by proposing compromises. However, they are really recommending defeat, so their surrender strategy needs to be called out and rejected. The politics of radical moderation will only make matters worse. Such an attitude is wrong and must be opposed.

The first is to acknowledge that the ballot referendum was a lamentable loss of a battle but will not determine the outcome of the war. As in all battles, mistakes happen, and lessons can be learned.

In the case of Kansas, the issue was not a total abortion ban but the complex issue of “unfinding” a right to abortion that the Kansas Supreme Court “found” in the Kansas Constitution. Everyone admits that the amendment’s wording was convoluted and allowed the left to use its ambiguities to spin its narrative.

The fight was on a battlefield that allowed the pro-abortion side to misrepresent the issues and frighten the moderates. The pro-life side tragically lost but must learn from its mistakes. The only realistic move is to regroup and try again. As the legendary Marine Col. John W. Ripley stated, “The second effort wins the day.” The glorious history of the pro-life movement is its constant ability to pull itself up from defeat, pray, and stay focused on ultimate victory.

The pro-abortion side does not practice what it preaches

The second reflection is that the pro-life movement must not moderate but double down on its message. It is time to disregard the dire warnings on the moderate right and radical left that predict failure for the pro-life side if it takes the Dobbs victory too far.

The pro-abortion side is recommending a strategy that it is not following. It does not practice what it preaches. Indeed, after the Dobbs decision, the logic of this “moderate” perspective would be to recommend that the left moderate its radical kill-until-birth position on abortion. Clearly, the Dobbs decision put them on the wrong side of legal history.

However, the left did precisely the opposite in the face of defeat. It doubled down and radicalized. Blue state legislatures are now passing North-Korean-style abortion policies that allow abortion up to birth with no restrictions. President Biden uses every weapon in his executive arsenal to make abortion available to those living in anti-abortion states. The woke establishment is pulling out all stops to defend this imagined “right” to kill one’s baby by shamelessly offering benefits to those who choose abortion over life.

No moderate voices plead with the left to de-radicalize. The liberal media’s message after Kansas is a demand that the left double down and the right tone down. Following their fallacious advice is a blueprint for disaster. Instead, pro-lifers should listen to it carefully and firmly do the opposite.

The history of the pro-life movement that led to the unlikely Dobbs decision has been an uncompromising defense of the moral law and human life. It is foolish to abandon a proven means of victory to accommodate those without the courage to take a principled stand. The pro-life side needs to double down.

The final reflection on the Kansas defeat is to avoid the temptation to turn abortion into a political issue. The left focuses on talking about the acquired rights, opinions, and choices of “pregnant people” outside the moral sphere. When referendums favor abortion, the left claims they are the infallible voice of the people. When court rulings favor life, the same left claims such decisions destroy “democracy.”

Pro-life activists need to stay away from such word games and political issue-framing. Poll numbers, election results, and messaging cannot determine the principles of the pro-life movement. It helps when the pro-life side uses creative and even emotive means to highlight the principles involved in the debate. All its initiatives need to be clear and precise. However, these things are not the most crucial part of the fight.

The fight must be centered upon the moral principles that never change. Thus, those who defend life must be laser-focused on the moral law. Procured abortion is always the murder of innocent life, and no political stats can ever whitewash its intrinsic evil into something good. The final goal must always be the end of abortion through all lawful means, despite the odds and opinions of others.

The pro-life position always wins when elevated to the moral battlefield. The left can never win in the moral sphere and constantly changes the subject when asked to define the right and wrong of destroying human life through procured abortion.

Moreover, this is not a battle of numbers but of impassioned activists whose strong moral convictions influence the majority and carry the day. The aging pro-abortion side has long lacked passion and principles and relied upon emotion and rage.

The war over procured abortion is a profoundly religious one. There is no reason to deny it. The obstacles are too great to rely upon merely human means.

Activists who engage in this struggle have found strength in Almighty God, the Author of the moral law that should govern all human action toward the common good. Through the intercession of His Blessed Mother, God changes hearts, removes obstacles, and gives victory to those who fight for His cause. Thus, activists must do their part to oppose abortion, but they must also pray, confiding in God’s aid in victory and defeat.