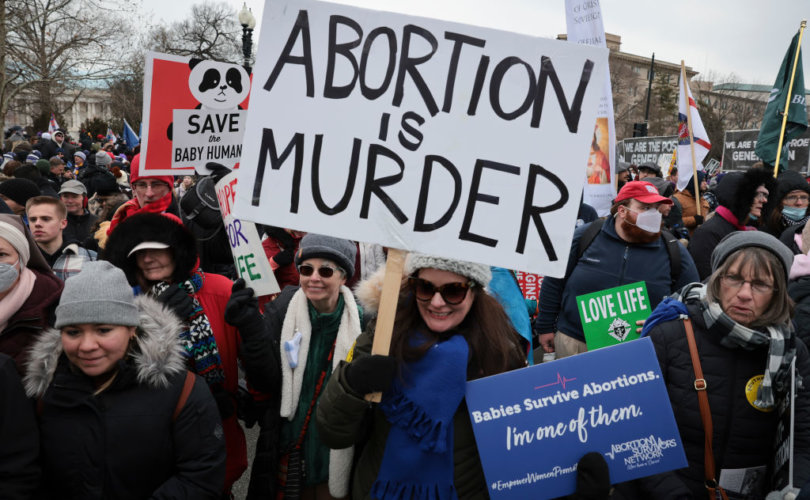 Activists at the 2022 March for LifeWin McNamee/Getty Images

(LifeSiteNews) – The pro-life movement joyfully celebrated the victory over Roe v. Wade. The decision represented decades of hard work to overcome the obstacles that stood in the way. Activists had to dispute the idea that procured abortion was a matter of “settled law” that could not be opposed. They had to brave the feckless charge that the pro-life cause was on the wrong side of history. Local groups turned each abortion clinic into a moral battlefield where activists fought, prayed, and often prevailed.

However, radical abortionists represent evil positions and are thus easily identifiable as the enemy. The most difficult adversaries are what might be called the radical pro-life moderates who constantly call for softening the movement’s position. These poll-watching liberal-pleasers always worry about what the left will think. These worshippers of peaceful coexistence between good and evil turn every move into a political calculation.

The radical moderates joined with the pro-life hardcore in celebrating the Dobbs victory. It was easy to help claim victory while the left recoiled in disarray and rage.

However, the fight has since stiffened. The radical pro-life moderates, especially spineless politicians, have returned to their default position of clamoring for moderation and compromise to attract voters for the midterm elections. The media report that centrist Republicans are scrambling to tone down their message for fear of a backlash.

These moderates quake when pro-abortionist advocates, for example, say that laws permitting procured abortion are necessary since otherwise, mothers suffering a miscarriage will be prosecuted. The constant liberal media barrages have the effect of shaking the radical moderates’ flimsy convictions.

Thus, moderate candidates say it is time to adapt to the mood change around the issue. Indeed, they radically hate any hint of appearing as radicals. They believe cowardice will yield better results than standing up firmly for one’s principles.

How easily they forget the lessons learned under the long regime of Roe v. Wade! Now is not the time to abandon a winning strategy but to double down and carry it forward.

There are three important lessons to remember in this new phase of the anti-abortion fight.

The first lesson is never to lose focus. The final goal of the pro-life movement is always the total elimination of abortion without exceptions. The acceptance of any compromise outside of that goal is a betrayal. It is perfectly moral and legitimate for activists to work incrementally at chipping away at the procured abortion monolith as long they have the firm intent to abolish abortion and its mentality from this land.

Over the years, a firm position has drawn supporters to the cause. It energizes the grassroots. People are much more prepared to support those who believe strongly in principles than those who water things down to almost nothing. This goal carries within itself the defense of Christian morality that prevents the immoral behavior that leads to abortion. Whenever the pro-life movement has been in crisis, it always returns to its roots and revitalizes itself by embracing more consistent, logical, and powerful expressions of its positions.

In this sense, the movement has always defied the moderate naysayers by delivering surprising results in the form of legislation and shuttered abortion clinics. By being steadfast, activists also frustrated the left by forcing them to fight on the moral battlefield where they always lose.

With the Dobbs decision, the focus must not change but only become more laser sharp. The goal remains the same. Victory will not come through moderating the pro-life message but by finding more powerful ways to defend the cause.

Not caring what others think

The second lesson is that activists must not care what liberals think of them. Their only concern must be to do what is moral and right, even if unpopular. If the world looks askance at such noble efforts, the problem is the world’s, not theirs. This strategy has always characterized the pro-life fight.

Thus, this work must be done openly, unapologetically, and enthusiastically. The pro-life activists must not fear appearing in the public square, on a lonely sidewalk, or in state legislatures. They must not give exaggerated importance to elections or polls. They must not be afraid to tell the truth about abortion to anyone at any time or place.

This attitude does not mean that the pro-life movement should now ignore public opinion on this issue. Indeed, activists need to pay attention to the debate to better change how the public thinks. However, they must avoid letting the wrong opinions of liberals and moderates dictate their actions.

Not caring about what the left thinks leads to the creative tactics and strategies that have hampered the powerful abortion industry. In seeking ways to shut down the abortion industry, activists must look for what Christ praised as the innocence of the dove and the cunning of the serpent. Thus, this attitude frees one from the illusions of liberal opinions and opens the way for the daring feats that paved the way to the Dobbs victory.

The radical pro-life moderates stifle effective action by being guided by what they imagine others think; they take the road to defeat.

The enemy has not changed

The third vital lesson is that the pro-abortion enemy does not change. Its goal of destroying Christian morals and order remains the same. Its activists will never be satisfied until society allows the total gratification of all sexual desires prohibited by Christian morality. Abortion, by its radical nature, is inevitably tied to all the letters of the LGBTQ+ lineup.

Pro-abortionists may window dress abortion as “reproductive rights” or “women’s health care.” However, the target is Christian morality, which restrains disordered human passions. The abortion movement will stop at nothing to obtain this radical goal. For this reason, its extremists seek to justify abortion until birth, sell unborn babies’ body parts, and perform abortions in Gosnell-like killing mills.

After Dobbs, the pro-abortion side has only radicalized and doubled down. Indeed, the abortion promoters present a better target to attack since they brazenly show their darkest sides. Showing the pro-abortion goals in all their horror must be a priority. Constant spreading of the religious and moral aspects of the debate—loud and clear—is crucial.

The radical pro-life moderates never insist that the pro-abortion people moderate their demands. They mistakenly think that being nice to evil will win sympathy. The moderates are now sending a confused “soft” message about abortion that can only hurt the midterm elections.

It is better to remember the lessons of the anti-abortion fight. Those impassioned by their cause change the course of history against all odds. Those who confide in God will always be on the winning side of history.

This focused and impassioned prayer and action overturned Roe, not the compromising advice from those moderates who would not risk all. Now is not the time to change course.