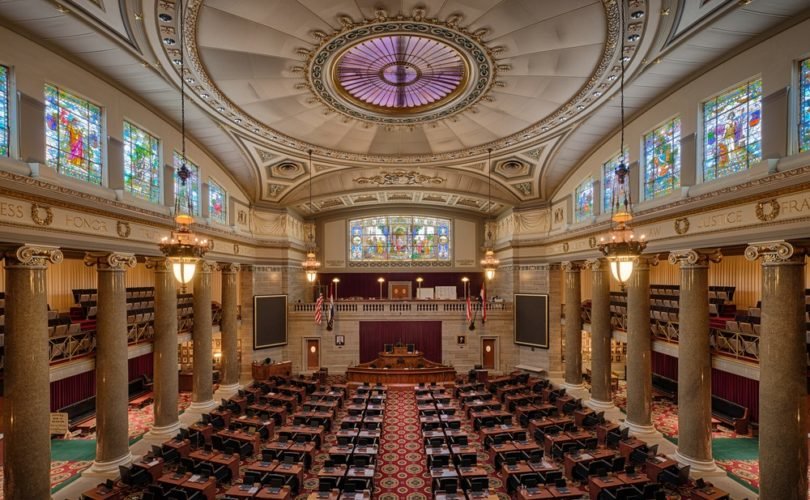 Imagine yourself sitting in a large, stately room, up in a balcony overlooking 160 of the most powerful people in your state, as they debate the value of your life.  Some legislators are arguing about how horrible your existence is, while others are defending your very right to survive.

That was my surreal experience last night, September 10, 2014, as the Missouri legislature ultimately passed a veto override of HB 1307 – a 72-hour waiting period to obtain an abortion, often referred to as a “reflection” period.

Governor Nixon had vetoed the bill on July 2 of this year, stating that there needed to be a rape exception. However, with a two thirds “super majority” vote Wednesday, the House and Senate were able to override the veto – with no exceptions.  The final vote was 117-44 in the House and 23-7 in the Senate.

I was invited to the Missouri State Capitol by Samuel Lee, director of Campaign Life Missouri, and Tucker Jobes, Chief of Staff for the Senate bill’s sponsor, Senator David Sater, R-Cassville.  When the governor vetoed the bill, Sen. Sater completely rejected any notion of reintroducing the bill with a rape exception, knowing that children conceived in rape do not deserve such blatant discrimination and devaluing of their lives.  For that, he is a hero to the tens of thousands of children born each year as a result of rape, and their mothers who love their children dearly.

The debate on the bill began as the House sponsor, Rep. Kev Elmer, R-Nixa, gave a rigorous defense of all life – specifically mentioning Angela Grogg, pro-life speaker from Save The 1, who was at the Capitol sharing her family’s story, along with her daughter Pyper who became pregnant by rape at age 14, and her 3 year old grandson Noah who was conceived in rape.  Rep. Elmer spoke of the value of Noah’s life and how this innocent child does not deserve to be targeted and devalued.

At a pro-life rally in the Rotunda earlier in the day, Angela spoke, sharing that Noah turns three this Sunday.  So when Noah was brought on stage with his mother, the crowd of 250+ sang him the most powerful and memorable version of Happy Birthday you could ever hear!

During the House debate on the veto override, many legislators who advocate for abortion rights used the “r-word” – rape – as a ploy to try to win public opinion on this bill that they would never be willing to support even with a rape exception.  Rep. Stacey Newman, D-St. Louis, called the legislation “the Todd Akin bill of the year.”  She also said that it’s insulting to women and throwing them under the bus.  Sitting there listening to her, I felt like I had a good view of the underside of the bus, as she had no problem insulting my very life!  Where’s her compassion, as more than 50 percent of those being aborted are female?!  She and many others repeatedly told the bill’s supporters, “You just want women to change their minds about abortion.”  It’s rather evident that their greatest fear is that women will change their minds about abortion, thus causing their friends at Planned Parenthood to lose “revenue” from abortion profits.  They needed to maintain their 100 percent approval rating with the abortion industry.

But there were many powerful voices in response to the vitriol.  Rep. Keith English, D-Florissant, began his comments by letting us know that his heart was pounding as he was about to share something very personal which he’d never shared in front of the whole assembly before – his wife obtained an abortion without his consent or knowledge of his 18-week son Luke, which has completely devastated him.  He mentioned that he’s a cage fighter, and perceived as such a strong man, but the abortion of his son has left an indelible mark upon him.

Explaining why she’s so passionately pro-life as a woman, Rep. Holly Rehder, R-Sikeston, shared her personal story of having become pregnant at age 15, and also having been a victim of rape/incest, though that child was not conceived as a result of the incest.  The House floor turned completely silent as she shared this powerful testimony – except for one extremely rude comment from Rep. Newman, and chuckles from her pro-abortion cronies.

Term-limited Rep. Jeff Grisamore, R- Lee’s Summit, gave a fervent defense of life as he shared about hearing a woman conceived in rape at the Rotunda rally earlier in the day.  There were two of us who shared our testimonies as a child from rape – me and another Save The 1 speaker, Susan Jaramillo, who lived in Jefferson City for several years.  Then he shared that he’d heard me speak in the Kansas City area several years ago, and explained why women like us deserved to have been protected as much as anyone else.

Missouri House Speaker Tim Jones (R-Eureka), also term-limited, gave credit to women who’ve shaped his pro-life values – his mother, a former girlfriend who was devastated by the loss of a child she’d once aborted, and Angela Grogg and her daughter Pyper.  He beautifully honored those women as he gave dignity to the value of little Noah’s life!

Other pro-life measures that state lawmakers passed by overriding Gov. Jay Nixon’s vetoes were HB 1132, which increases the amount of tax credits available to donors to maternity homes, pregnancy resource centers, and food pantries and Section 5.165 in HB 2005, which added an additional $500,000 in appropriations for alternatives to abortion services, to a record level of $2.16 million.

All in all, yesterday’s events served as an example to pro-life leaders and legislators all across the U.S. and around the world, that passing pro-life bills without exception is possible, and that a strong defense of all life is achievable without any scandalous flubs.  Many pro-life organizations came together in Missouri to make this all possible.  I’m hoping that other pro-life leaders and organizations will continue to contact me so that we can utilize the hundreds I have in my database of others conceived in rape and mothers from rape who want their stories to be heard.

Rebecca Kiessling is an attorney, wife, mother of 5 and international pro-life speaker, sharing her story of having been conceived in rape and nearly aborted at two back-alley abortions.  She’s the founder and President of SaveThe1 – www.savethe1.com, and co-founder and Board Member of Hope After Rape Conception – www.hopeafterrapeconception.org.  Visit her website at www.rebeccakiessling.com.