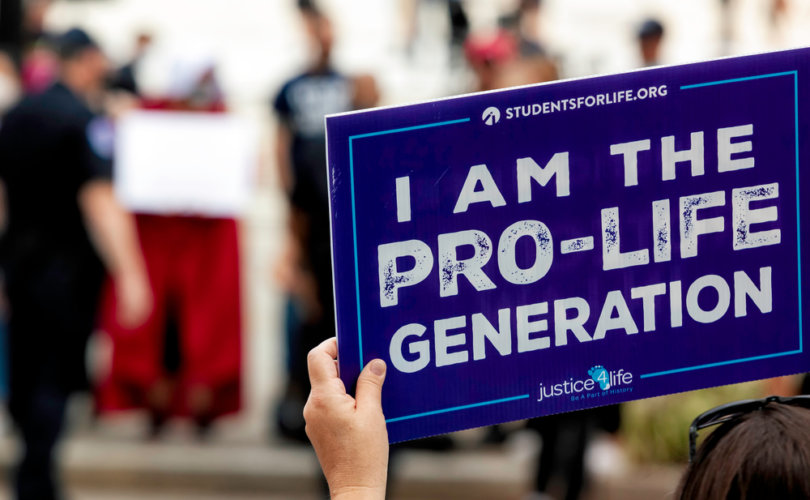 (LifeSiteNews) — The goal of abolishing abortion in America cannot be achieved if it involves any alliance with the transgender and LGBT activist movements.

“Trans lives start at conception,” chanted some pro-life protesters outside of the Supreme Court last week during the Dobbs v. Jackson hearing.

A pro-life activist and gender dysphoric female who goes by Herb Geraghty but whose real name is Rosemary said that “trans rights begin at conception” the day after the Supreme Court hearing. The day of the hearing she said she was at the Court to show that pro-lifers are not just conservatives and men.

“Bringing our diverse coalition of people from all races, ages, religious backgrounds, and gender identities shows the pro-abortion side that the pro-life community is not the caricature of the ‘old conservative Christian cisgender white man who wants to oppress women,’” Geraghty said. “This is a human rights movement, and we will not be silenced.”

Her statement is a good starting point for why the pro-life movement must reject any alliance with sexual and gender activists.

Pro-lifers who claim to be “transgender” and use that as an argument for the validity of their position play into the identity politics that abortion activists promote.

Her statement implies that the truth of abolishing abortion lies in the diversity of the people against killing babies. But if every single pro-life activist, politician, and commentator was a 99-year-old white man or a 17-year-old black girl, the truth about the immorality of destroying God’s creation would not change.

But Rosemary Geraghty is a fan of identity politics, referring to herself in one interview as a “queer, feminist atheist.” Rehumanize International, the group she leads, also aggressively pursues identity politics, posting photos of signs that said “Queer Atheist Pro-Life” and “Leftist Feminist Atheist Vegan Pro-Life” from the Supreme Court.

The point, you see, is that they aren’t like those pro-life Catholics and Protestants. They have dyed hair and they reject God.

But truth is not on the side of the LGBTQ movement — another reason why the pro-life movement must be careful and run quickly from any attempt to combine with it.

The way I see it, there are two key arguments against abortion. The religious argument is that God created all human life. It is a grave sin to destroy innocent human life created in the image and likeness of God.

The “transgender” movement explicitly rejects that God created each person in the perfect image of God. Instead, the activists believe they can change their gender by taking hormones, mutilating genitals, or, at a minimum, cross-dressing and adopting the opposite sex’s characteristics.

“I don’t think there is a point in which we get a soul or anything like that,” Geraghty, the gender dysphoric female, said in one interview in 2017 while still going by Rosemary.

The non-religious argument is that our DNA proves that every single baby, from the moment of conception, is a distinct, whole, living human being. Our society should not tolerate the destruction of an innocent human being.

But the “transgender” movement rejects this idea, too. A gender dysphoric male or female who believes they can “change” genders takes the same nominalist approach to gender as abortion activists take to human life. They argue our concept of what is a man, woman or human life is always evolving. Or that we cannot establish with 100 percent certainty when life begins or what makes someone a man.

Gender dysphoric activism necessarily includes the contraceptive mindset, which is incompatible with the abolition of abortion. How can a woman who wants to pretend to be a man and takes hormones and has a tubal ligation differentiate her view from a woman who takes birth control or aborts her baby? They are the same side of the same coin — both reject their natural, God-given fertility and life-creating abilities.

Men and women who embrace their gender dysphoric mental illness are a better fit to team up with the homosexual activist movement than the pro-life movement.

While some “couples” might adopt, there is a reliance on IVF and surrogacy, both of which promote the disposability of human life by destroying “unwanted” embryos or babies diagnosed in the womb with “defects.” Abortions sometimes happen in surrogacy because there are “multiple pregnancies.”

Even the adoption of children by homosexuals represents the commodification of human life, by putting the desires of the homosexual “couple” above that of the natural law rights of kids to grow up with a mom and a dad. Pro-lifers cannot have a problem with surrogacy in the whole but support the idea of “homosexual marriage” and parenting which relies on using women’s bodies to create children for either two men or two women.

People who struggle with gender dysphoria or homosexual inclinations and are trying to amend their life to overcome their mental illness should be prayed for and encouraged to live a Christ-centered life.

Those people are welcome to join in the pro-life movement to abolish abortion — those people understand that all human beings are created in the image and likeness of God and are made for a higher purpose.

But people who fully embrace a sinful lifestyle and genital mutilation cannot coexist with those of us who want to see an end to the destruction of God’s creation.