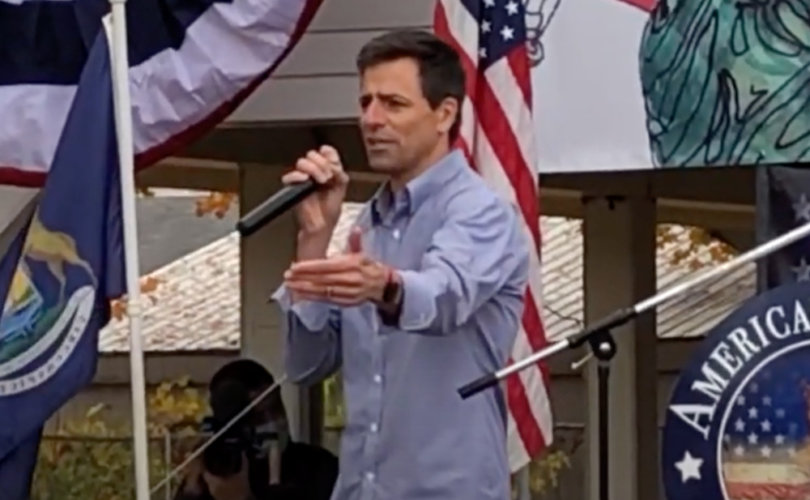 February 3, 2021 (LifeSiteNews) — The state of Michigan has been in the news for all the wrong reasons the past several years.

Autocratic governor Gretchen Whitmer has decimated the state’s economy and severely restricted the civil liberties of the citizens she once promised to serve. More small businesses and restaurants are closing for good with each passing day.

Frustrated Michiganians have held rally after rally and signed petition after petition demanding that their freedoms be re-instituted and that Whitmer’s draconian lockdowns come to an end.

Grassroots activist Ryan Kelley hopes to channel that frustration into a political movement that will result in Whitmer being ousted from office.

Kelley, a father of five who serves on the Allendale Township Planning Commission on the west side of the state, announced earlier this week that he’s seeking the Republican nomination for governor in 2022. You can check out his freshly-launched campaign site by visiting RyanDKelley.com.

As a concerned Michigan resident who lives in nearby Grand Rapids, I wanted to know what it is he stands for and what he plans to do to turn things around.

“Michigan needs authentic leadership that will respect our form of government and the rights of the citizens,” he said in an email. “The current administration has repeatedly violated the U.S. and State Constitutions, disregarded the legislative and judicial branches (including the Supreme Court) and continues to run the entire state poorly via the executive branch.”

“Michigan deserves leadership that will uphold the oath of office and protect our form of government and the rights of our citizens. We need a leader that will bring enthusiasm of America to Michigan and return our state to prosperity.”

Michigan has had — and continues to have — some of the worst COVID lockdown rules in the country. In fact, the state’s ban on indoor dining lasted all the way until February 1, making it the last in the nation to open up. Patriots across the state have been furious with Whitmer for her tyrannical decrees. I reported on one of their rallies held at the DeltaPlex entertainment venue in Grand Rapids last month.

Kelley told me that Whitmer’s orders have placed “an excessive burden on business. It gives us no hope for a better future under her leadership.” I agree.

A devout Catholic, Kelley is running on an optimistic message. On his website, he lists four key values to his platform: freedom, hope, love, and prosperity. He re-iterated that message on local radio program West Michigan Live With Justin Barclay this week Wednesday. You can watch his appearance below.

Kelley is popular among grassroots activists in the state. He’s made a number of public appearances at rallies in the state’s capitol of Lansing and elsewhere.

Co-founder of the American Patriot Council, he’ll likely be a formidable force in the race, which will surely attract several establishment as well as outsider candidates, as Whitmer is looking more and more vulnerable. She may well end up taking a full-time position in the Biden administration or at the Democratic National Committee in the near future.

Kelley currently serves as a Trustee for Allendale Township, where he has organized counter protests against social justice warriors who wanted to remove a nearby statue commemorating the Civil War. Black Lives Matter activists and local media outlets strongly criticized him for his efforts. Kelley had previously described Black Lives Matter as a “terrorist group.”

Kelley also attended the January 6th rally in Washington, D.C., organized by President Trump. The Detroit Free Press, WOOD-TV 8 (NBC’s affiliate in Western Michigan), and other media have been publishing stories about how local Democrats are demanding Township leaders remove him from his post.

Kelley told me he’s not intimidated by the threats and the cancel culture tactics in which liberals and the press are engaging. He said they’re scared of his people-first, grassroots campaign.

“Yes, I was in Washington, D.C., on January 6th. I was there with a million-plus other people IN SUPPORT of America and of President Donald Trump. Calling what happened an insurrection is completely inaccurate. 99.9% of the people that where there, myself included, were there to exercise our First Amendment right. I did not enter the Capitol building that day, nor did I engage in any confrontation with law enforcement.”

If you’re interested in learning more about Kelley’s policies and his bid for governor, visit RyanDKelley.com.