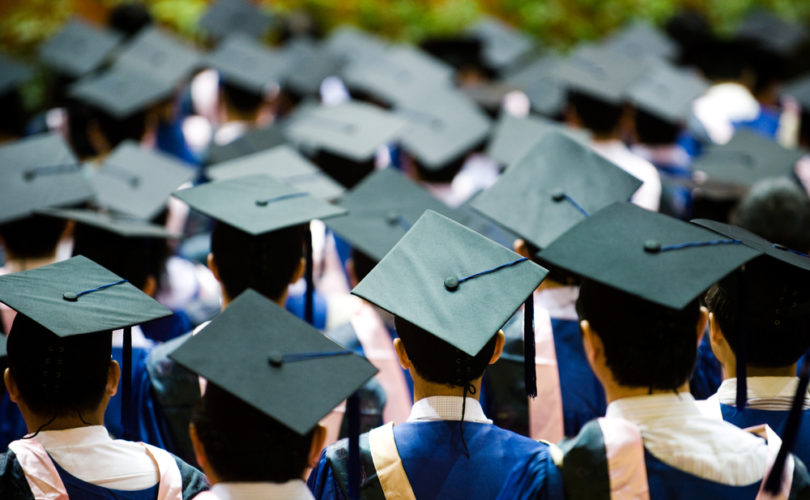 June 17, 2019 (American Thinker) — One hallmark of religions is they often have an institution of higher learning, where the most ambitious and well schooled young people go to complete their religious training and enter the world as leaders of their faith. In Christianity, we call these seminaries. A seminary is the place where a devout believer goes before he enters ministry. Once this training is completed, he is called to go out into the world to minister to his flock and to convert the unconverted.

The Progressive Left has a seminary, too — a finishing school where the ambitious and well schooled are polished to become “ministers” of their religion. It is the American university system.

The average high school graduate of promise often has no idea what world he is entering. All he knows is that all of his teachers have encouraged him from kindergarten until the end of his senior year that, if he has the talent and ability, he must go to college. The reasons for this aren't nefarious. He will make more money as a college graduate; he will have a lower unemployment rate as a college graduate; and his general prospects for marriage, mental health, and the chance to retire are greatly improved by college. College has been, and continues to be, a great benefit — just like the public primary and secondary schools — for these reasons. But he is also unaware that he is about to enter a world that is even more slanted against tradition and conservatism than his usually left-leaning public school teachers, where conservatives are outnumbered nationally by a ratio of only 6 to 1.

Then he goes to college, and he enters an entirely different world. The ideology is no longer split almost fifty-fifty, as it is in the real America. Instead, he enters the seminary, a place populated by a sort of priesthood (the professors), whose members teach the religion of Progressive Liberalism — through the content of the courses, through the arguments of the lectures they give, and through the host of campus-sponsored events the university puts on. Looking at the politics of the university professoriate, it's hard not to make the connection.

In 2018, the National Association of Scholars published a study by Mitchell Langbert, an assistant professor at Brooklyn College. The study looked at the political affiliations at 51 of the 66 highest ranked liberal arts colleges and 8,688 of the professors they employ. His study found that, in aggregate, Democrats outnumber Republicans by a margin of nearly 13 to 1. That's quite the change for our young 19-year-old who just got out of the Liberal Sunday School (the public K–12 schools) where Republicans were outnumbered by only 4 to 1. Broken down into different majors, the numbers are even more pronounced. In the anthropology and communications majors, Langbert found 164 Democrat professors and not one Republican at these universities. In religion, Democratic professors outnumber Republicans by a margin of 70 to 1. These professors are often the ones consulted by the media and used in the documentaries your kids watch about religion in the public schools. In the philosophy department, Democrats outnumber Republicans almost 18:1; many of these graduates go on to careers in law and make the laws decades later, which almost always fall hardest on the practitioners of traditional religious faith.

The priests and priestesses who teach in the Progressive seminary put their money as well as their mouths where their hearts and minds lie. According to Open Secrets, “political donations from the education industry largely come from individuals associated with various institutions, such as universities[.] … They've typically favored liberals; over the past decade, the worst year for Democrats was a cycle in which their party received 73 percent of the cash.” In 2018, those working in education gave $9.1 million to Republicans while donating $72.3 million to Democrats — just over 88% of their total contributions. This probably tells us that not only are Republicans far outnumbered by Democrats, but they are also outnumbered in enthusiasm — if we assume that actually giving your hard earned cash is a measure of active belief and support.

What's happening isn't education; it's indoctrination. It's not necessarily a conspiracy, and I suppose more often than not it's not always even malevolent. But it doesn't change the deleterious effects of hearing only one side persuasively argued. For a student majoring in anthropology or communications at one of these elite universities, it is possible to go four whole years without encountering a single Republican professor. Elaborating on the study, we know from it that “despite the variability, none of the 51 colleges had more Republicans than Democrats. According to the survey, over a third of them had no Republicans at all.”

Will this student know traditionalist or conservative counter-arguments? Will this student feel comfortable challenging his professors? Indeed, will actual conservatives getting their doctorates be themselves? They know for a fact that they are outnumbered greatly. They know how competitive it is to get a tenure-track professorship. Will they really speak their minds in the cutthroat realm of the university in the name of academic integrity? Surely, pusillanimity on the part of conservatives is rewarded when you are outnumbered 13 to 1. Or rather, rational self-preservation is rewarded by you shutting your mouth and not going off script. Why? Because for every Jordan Peterson who gets rich when a Progressive mob of inquisitors comes for him, how many unknown Jordan Petersons are there who committed career suicide whom you never hear about because they were open about their traditional beliefs — and as a result, never got hired?