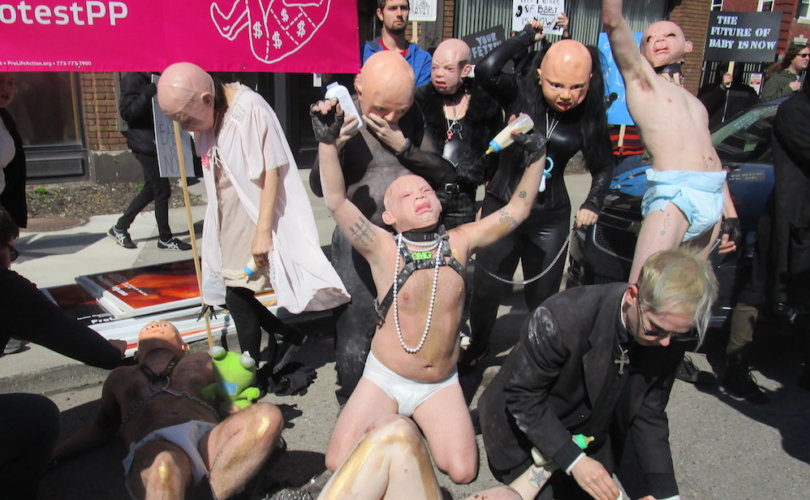 April 26, 2016 (LifeSiteNews) — The third nationwide protest of Planned Parenthood took place Saturday, April 23.  It was also the first annual day of Planned Parenthood protests organized by Citizens for a Pro-Life Society, Created Equal and the Pro-Life Action League. 228 Planned Parenthood abortion clinics and facilities were covered with nearly 10,000  participating in these public demonstrations all over the United States.

It is certainly not unusual for pro-life demonstrations to be counter-picketed by abortion supporters. Even the annual March for Life in D.C. has attracted over the years its share of those who seek to defend and advocate legalized abortion as noisy picketers stake out their protest territory in front of the United States Supreme Court within feet of pro-lifers assembled to listen to the testimony of women who regret their abortions as part of the Silent No More Awareness Campaign. However, more recently these pro-abortion counter demonstrations have taken on a militancy not seen in previous years as well as the employment of grotesque imagery.  This year’s D. C. supporters of Roe v. Wade, both men as well as women, sported white pants with bright red paint streaming down between their legs to simulate blood flow, symbolizing the life-threatening aftermath of illegal abortions women would be forced to endure should Roe ever be reversed.

However, even this outrageous display pales in comparison to the tactics of the Satanic Temple. Its Satanist members have now counter-demonstrated against two ProtestPP pickets that were organized by me as director of Citizens for a Pro-Life Society at the Planned Parenthood on Cass Avenue in Detroit, as well as at a sister demonstration at the Planned Parenthood in Ferndale. The first time took place August 22, 2015 and the second on April 23 of this year.   While we were not visited by Satanists at the October 10, 2015 ProtestPP, nonetheless 20 pro-abortion picketers did show up, many of them lesbians. Their signs read “May the fetus you save be fabulously gay.”  Of course, I told them: “We don’t discriminate on the basis of sexual orientation. Gay or straight, we hope to save them all!”

“The group sent out a press release late last night where they detailed their stance against the anti-choice groups protesting at Planned Parenthood. The highly politicized anti­-choice movement advocates for the abolition of Planned Parenthood, an organization that provides critical preventive and primary reproductive health care services to low ­income women. The current cornerstone of their argument stems from a fabricated, fictional story that clinics ‘sell baby parts for profit’. Organizers of the April 23rd protest, entitled #ProtestPP, directly intended to irresponsibly perpetuate this contrived story in an attempt to leverage misunderstanding for political gain and impose the moral opinions of some upon a diverse community.”

The Satanists are out to promote the usual Planned Parenthood line that this group is simply a needed philanthropic organization providing services to poor women and that David Daleiden’s Center for Medical Progress videos showing that Planned Parenthood harvests and sells aborted baby body parts—we’ll they’re just lies!

Members of the Satanic Temple first descended on the ProtestPP event in Ferndale, MI.  There they were confronted by indeed, a Eucharistic procession and the recitation of the Divine Mercy Caplet. Barb Yagley, one of the pro-life organizers observed:

“The Satanists endured 10 minutes of the Eucharistic Presence, brought by Fr. Roman, while we prayed the Chaplet of Divine Mercy.  Their street theatre was delayed until the Eucharistic procession ended at Planned Parenthood at 9:43am.

The public in Ferndale did not get to see this stunt. The whole troupe left after about 5 minutes of their theatre as we prayed the sorrowful Mysteries of the Rosary.”

When the Satanic Temple performance was completed in Ferndale they dashed off to our pro-life protest at the Planned Parenthood in Detroit. Their arrival however was preceded by a contingent of their fellow demonstrators who lined up in a row; curbside near the abortion clinic’s gated parking lot entrance. Many of them held signs with the message: “The Future of Baby is Now.”  We wondered at first if they were pro-lifers—after all what is the meaning of such a message? Indeed, the entire messaging and imagery employed by the Satanists was oddly convoluted and ambiguous and speaks to their inability to rationally communicate their position. Fresh from Ferndale the Satanists’ main event arrived. A black van pulled up across the street and a menagerie of hideously-costumes actors tumbled out. They assembled themselves in an open parking space on the street right in from of our pink banner that read: “Planned Parenthood harvests aborted baby body parts” held up Larry and Isaac. Many of the Satanist performers wore full baby-face rubber masks and were naked except for Pampers diapering. They flung talcum powder into the air, from baby bottles they squirted formula at each other and on themselves—flailing about on the pavement with baby cries and whimpers. Others were dressed in mock religious garb—very poorly conceived. For example it appeared that one demonstrator attempted to look like a nun as she wore something that simulated a long black veil and a white habit. Another Satanist wore a black suit and silver cross, perhaps hoping to look like a priest. The fake nun whipped the babies, other babies whipped themselves,  the priest figure knelt on the ground and acted as if praying, sometimes shoving a pacifier into one of the wailing baby’s mouth. Then someone else brushed the bodies of the babies with gold paint.  The spectacle lasted about 10 minutes.

If the Satanists sought to provide repulsive street entertainment they certainly succeeded.  But if this was a message in support of abortion and aimed to deride the pro-life cause, the message was essentially incoherent.  One of the concerns of this group is that respect for the right to life of the unborn is religiously-based ideology illegitimately imposed upon those who don’t agree with it. But if that’s the concern they wished to express, the message never got though. If a nun is whipping babies this seems to communicate that it is the Church and those who believe in God who persecute the unborn which does not comport with the actual facts.

Also depicting babies crying, wailing and suffering pain seems to convey sympathy for the plight of unborn children which is of course completely contrary to what these Satanists believe.  I reached out to one of the Satanist demonstrators and asked her to explain the meaning of the street theater as their imagery was “lost on me.”  Our conversation is at the very end of the You Tube video.  She obliged by stating that they were showing their objection to what they believe is a pro-life fetish with the fetus, that the pro-life movement objectifies the fetus, making what is no more than simply another organ in the body of the woman into the subject of rights, thus exalting the fetus over the existence of the woman and her right to self-determination.

If this was their point—no one observing the performance got it.  And perhaps that’s just as well.  However, the question may be asked why those who place themselves on the side of Satan seem unable to clearly articulate their beliefs?  The communication they attempted to make was marred by confusion, incoherency, images that are tortured, twisted, distorted, and illogical—a street theatre that only made sense to the initiated—and even that may be doubted.  After all, what on earth does a picket sign mean which says: “The future of the fetus is now” held by those who don’t believe fetuses should have a future?

The Satanists’ lack of coherency may actually itself stem from their allegiance to the Father of Lies. Symbols and images are things of the earth that express an objective meaning, indeed they are created by God who imbued them with an order, truth and beauty—but in the hands of the enemies of God they become convoluted, twisted and distorted—those symbols of communication lose their sense.  Compare the use of Satanist imagery with Christian symbols, most especially the signs used in Christian sacramental worship. The symbols water, oil, bread, wine and so forth are elegant, sublime; they create an instant reference between what the symbol is in itself and the truth that is communicated, mediated by them.  But when imagery is placed into the hands of those opposed to God’s order, chaos ensues, as if the Satanists simply are unable to apply symbolic imagery to the service of communication.  In the end, it’s all convoluted. All that’s left is the hideous shock value—and not much else.

Unfortunately, we probably have not seen the last of the Satanic Temple. Perhaps they will burn-out eventually, but I fully expect the next time we are out on Cass Avenue in Detroit protesting child slaughter, the Satanists will be there to again feed off our demonstration.

The Satanic Temple feels the need to counter-act pro-life demonstrations. In some ways this is a testimony to the effectiveness of the pro-life cause. They must react to us in our actions that seek to end the injustice of abortion. They recognize our efforts as a threat to legalized abortion and the abortion industry, and this is what motivates the obvious elaborate effort that goes into their street theater—however poorly conceived.

In addition, when Satanists—and not merely atheists, are on the side of Planned Parenthood and the killing of the unborn, this speaks volumes regarding the evil and injustice of the abortion practice. Satan is a murderer and a liar.  Planned Parenthood clinics are his temples where his demonic rituals take place. The fact that Satanists ally themselves with Planned Parenthood should at least be an embarrassment to this organization—and if they really understood what it meant—members of Planned Parenthood would get out now! Pray that they do.

Also see here video taken by activist pro-life leader Lynn Mills.  “The Angry Man”—another example of how some reacted to the pro-life demonstration in Detroit. He lives in an apartment in the same building as the Planned Parenthood abortion clinic—yet his anger was aimed at those who protest abortion.