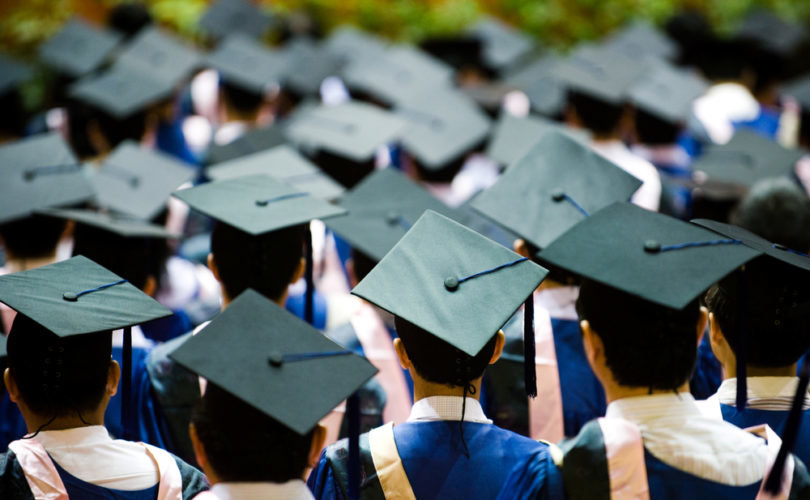 March 26, 2018 (The Catholic Thing) – I'm meditating on the most recent debacle at my old place of work, Providence College. A young man has been harassed (crowds outside of his room several nights in a row, so that he couldn't brush his teeth in peace; campus-wide condemnation; a demonstration approved by the school's authorities) and threatened with anal rape (in an obscene cartoon on his bathroom mirror, which met with a shrug from the authorities), for affirming on a bulletin board the truth and beauty of marriage according to nature, the Church, and Jesus Christ. The administration, far from protecting him, has given aid and comfort to the wolves.

The Women's Studies Program has howled, which is predictable, but predictably insane, because what's obvious to anyone with eyes is that the sexes are made for one another. People used to say that a certain private vice made you go blind. Politicization of everything is a public vice. It fogs up the brain. In this case you can't even see the birds and the bees aright. The birds evidently don't build nests. They build prisons. The bees don't make honey. They make belladonna.

The Board of Multicultural Student Affairs has gathered for the kill, which is also predictable, and predictably incoherent, because until two minutes ago, and still everywhere in the world outside of the exhausted post-Christian West, the people of every single culture, in all climates, from all language groups, of all races, at all stages of technological development, have taken for granted that marriage means a man and a woman. Replace the “multi” with “uni” or “non” and you will hit the mark.

They have all bowed down with awful reverence prone before the sexual revolution. And the administrators of the college, peeking up and glancing at a crucifix dangling crooked on a wall, now ask how they can “go forward” in charity from the controversy, welcoming into their midst people of all manner of sexual self-identifications, affirming those identifications, yet somehow managing to keep their Catholic identity.

Lots of luck with that. Belial too is a jealous god.

At the end of what he intended as a prophetic work, Eros and Civilization, Herbert Marcuse called for an irreversible detachment of sexual mores from the structures, the instincts, and the teleological orientation of the organs of the body male and female, so that libido would be liberated not just for the genitals but for the whole person.

We needn't worry that such liberation would sink us in the mire. It would no longer be as Shakespeare puts it, that “The expense of spirit in a waste of shame / Is lust in action.” In the brave new world of total libido, man would be transformed: he would be washed bright and clean on the sexual heights.

How can this be offensive?

I am reminded of the serpent in Paradise Lost, suggesting to Eve that if the forbidden fruit made a rational creature out of a beast, who knows what it will do for man? We shall soar beyond civilization and its discontents, Marcuse says. “Let the sun shine in,” sang the Fifth Dimension. “Polymorphous perversity,” as Marcuse called it, would free us in the body and from the body.

If you buy the principle that Marcuse is selling, you buy all that the principle entails. You buy the weird extra-corporeal notion of the self, using the body as an instrument for pleasure. You buy fornication, since sexual activity is no longer considered as the child-making thing, and thus to be limited to – and fostered within – the haven of marriage.

You buy abortion, since pregnancy, which implies the health of the reproductive organs, is considered a dis-ease, an atavistic survival from the times when knuckle-dragging men haled their women by the hair and made them big with babies, in caves.

You buy the “liberation” of children from their innocence, since that is considered no longer as innocence but as repression.

You buy easy divorce, and pornography, and all the consensual works of self-abuse, sadism, and treachery.

You buy a world in which men and women no longer know what they are, and in the confusion they do plenty of bad things to one another, not all of them with malice aforethought.

She may not say, to take a case that will apply to but a single person out of ten million, that you should not put away your husband or wife and take up with another, but if you do, the adultery wears off after a while, especially if you remain a part of the mangled lives of your children.

I'm a sinner. I don't want the Church to show me how I can be comfortable with my sins. I want the damned things out. All the deadlier is the principle of sin. The principle of the sexual revolution is a lie. Its root is in hell.

We go forward by being just in our principles, and then we minister to sinners, ourselves and everyone else. Nothing else will do.