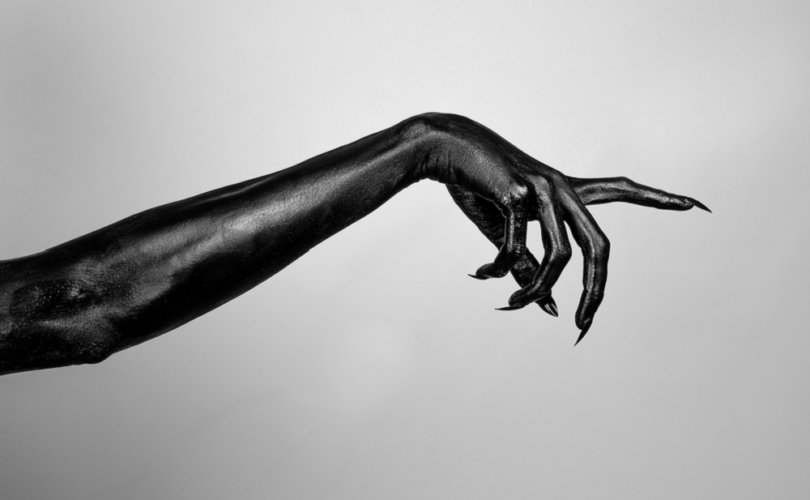 February 10, 2021 (LifeSiteNews) — It’s frequently observed that the devil’s best trick is persuading us he doesn’t exist.

One of the clearest demonstrations of this truth is the way people often try to reinterpret scriptural accounts of Jesus’s confrontations with demons, such as those in our recent Gospel readings at Mass.

“Folks in Bible times didn’t understand disease,” people will say. “These weren’t literal demons. They were merely symptoms of conditions like epilepsy or mental illness. But since those who recorded the incidents didn’t have our modern scientific frame of reference, they could only describe them in demonic terms.”

The problem with trying to interpret Scripture from a purely clinical point of view, however, is that it ignores the spiritual dimension of life. It glosses over the reality of supernatural evil.

Supernatural evil is real. The traditional prayer to St. Michael speaks of Satan and his minions prowling about the world “seeking the ruin of souls.” And that’s a good description of the threat we face.

Just as there is a heavenly realm, populated by the angels and saints, so too there is the domain of Satan and his demons. They hate God, and they hate His creation. Which is to say, they hate us, on whom they seek to wreak havoc, and distort the image and likeness of God in which we’re made. They do this through both direct attack and indirect influence.

But so successful is the devil’s deception that skepticism about spiritual matters has become the dominant outlook. Even those who sense the reality of a dimension beyond the material world tend to be wary of revealing their feelings on the subject.

That’s why special recognition is due Dr. Richard Gallagher, a practicing psychiatrist and medical school professor who has written a well-documented book titled Demonic Foes. Dr. Gallagher has put his professional reputation on the line to share his 25 years of experience working with patients who undergo possession or diabolic attack, or who are beset by various kinds of paranormal phenomena.

Over that time Dr. Gallagher has observed an increase in such occurrences, which in an interview with Esquire Magazine, he attributed to a falling away from traditional religious faith.

“When people give up a mainstream or more orthodox type of religion, they generally develop some kind of substitute belief system,” he told interviewer Adrienne Westenfeld. “That often involves ideas about energy forces, occult themes, and visitation by spirits. A lot of exorcists feel that, through alternate spiritualities, these people have opened themselves up to evil forces and evil spirits, in ways that more mainstream religious people are protected from.”

— Article continues below Petition —
Boycott American Girl: Tell Mattel to STOP pushing a lesbian storyline on children!
Show Petition Text
2286 have signed the petition.
Let's get to 2500!
Thank you for signing this petition!
Add your signature:
Show Petition Text

There’s no ignoring a correlation between declining church affiliation and a rise in the occult. But you don’t have to dabble in tarot, séances, or Ouija boards to recognize evil influence.

For instance, the new administration has committed to increasing the availability of abortion to a degree that seems quite irrational when surveys indicate public desire for more abortion limits and controls. Is this devilish motivation pre-empting political judgment, even though Joe Biden has made so much of his hope to unite the country?

Likewise, the popularity of trendy dogmas that deny both moral and biological reality — chief among them gender ideology — clearly suggests satanic inspiration.

And what can explain the persistent demonstrations and rioting among Antifa and Black Lives Matter types but demon-prompted discontent? With sympathetic politicians in power now, you’d expect a shift in emphasis toward consolidating gains for the oppressed groups whose interests Antifa and BLM claim to represent.

Yet the violence continues. We recently witnessed a march through Washington, D.C., punctuated by chants of “Burn it down!”

In the Church itself you can discern the hand of Satan. Even the most hardened secularists acknowledge it in the great priestly sexual abuse scandal. But it’s also surfaced in a series of other grave concerns, including highly questionable Vatican financial arrangements and the increasingly apparent surrender of papal authority over the Church in China to a hostile communist government.

Eyebrows have even been raised about a recent announcement that Pope Francis will deliver an online address to the upcoming Los Angeles Religious Education Congress. A recent LifeSiteNews article asks what could be a sensible rationale behind the Holy Father’s participation in an event with “a long history of promoting and giving a platform to speakers who contradict Church teaching on abortion and LGBT issues.”

There are recognizable signs that an individual might be under demonic influence or even possessed. One is preternatural knowledge. Dr. Gallagher’s book describes people suspected of being possessed speaking foreign or ancient languages they never studied.

Another sign is unusual physical abilities, much like the man in the Gospel story no one could restrain, and who was so strong he could break chains. In the most extreme cases, there is levitation, an apparent ability to defy gravity. While Dr. Gallagher says he’s never personally witnessed anyone rise up off the ground, he reports in the book that several exorcists with whom he’s worked maintain credibly that they have.

Aside from possession, there is what Dr. Gallagher calls “oppression,” an obsessive focus on external displays. These involve hearing howls and screams and the spontaneous movement of objects, as well as receiving physical assaults, often sufficient to cause bodily harm, from unknown sources.

Finally, there are people whose homes or surroundings become “infested” by powers or unnatural agencies — what might be called “hauntings.”

Dr. Gallagher gives testimony to such phenomena. And he emphasizes that his experiences have made it clear that there are marked differences between demonic activity and common psychiatric distress.

I strongly recommend reading his book — although, I should point out that you might think twice about that if disturbing thoughts tend to keep you awake at nights. The book is indeed disturbing.

But we live in a time when our country, our Church, even our very homes, are under demonic attack. Never before in my life have I witnessed so much evil influence at work, so much confusion in the lives of our people, so much anger, so much misunderstanding of moral truths, Christian principles, and what the Church actually teaches.

This is supernatural evil. This is the work of demonic foes. This is the hand of Satan. And Satan is subtle. He often works indirectly or at a distance. And he accomplishes his objectives most effectively when we don’t believe that he even exists.

Today we need a sort of national exorcism, and this begins with prayer. Satan must be revealed, identified, and exhorted to be gone in the name of Jesus.

A priest of the Diocese of Camden, New Jersey, Rev. Michael P. Orsi currently serves as parochial vicar at St. Agnes Parish in Naples, Florida. He is host of “Action for Life TV,” a weekly cable television series devoted to pro-life issues, and his writings appear in numerous publications and online journals. His TV show episodes can be viewed online at https://www.youtube.com/channel/UCyFbaLqUwPi08aHtlIR9R0g.