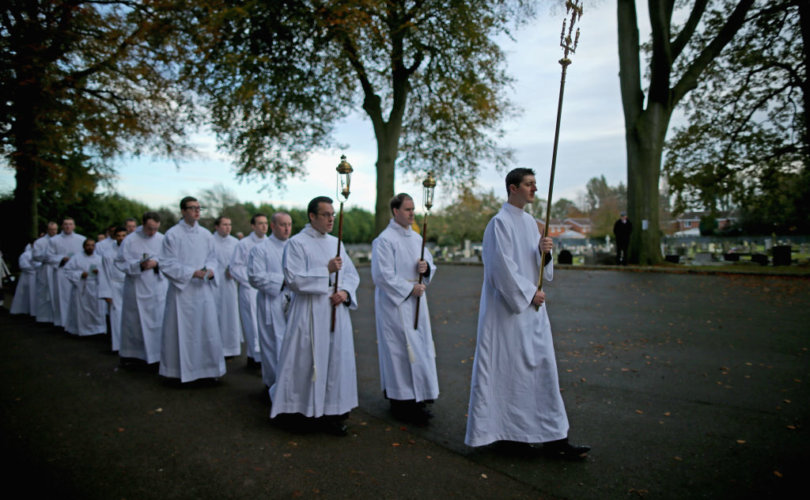 March 12, 2019 (LifeSiteNews) – My opinion as a psychologist and expert on homosexuality (and homosexual pedophilia) is that no man with homosexual or pedophile inclinations must be ordained to the priesthood, nor admitted as a seminarian.

Homosexual inclinations tend to be obsessive. This is also true in cases where initially such inclinations may not at first be obsessive. It cannot be reliably assessed if a man (or young man) with such inclinations — regardless of whether they may appear weak or less weak — will continue to be celibate in the future. Changing life situations, emotional problems, and certain outward pressures or situations often bring the initially celibate homosexual to start seeking sexual contacts or relationships.

In comparison with men with normal sexual interest in this respect, the homosexually inclined are very much more given to being obsessed by (homo)sexual fantasies; to nourishing or starting habits of masturbation (which lower the threshold to surrendering to live contacts; to having emotional crises which undermine their resolutions and make them seek comfort in their fantasies etc.; to deluding themselves into believing their romantic feelings for admired or ardently-sought intimate friends are not wrong at all, but on the contrary, are expressions of noble, real and profound love. On the basis of this naive illusion, their desires inspire them with various rationalizations, if not for physical contacts, then for “chaste” or “faithful” friendships (which never will remain chaste and are in practice not “faithful”.)

These rationalizations and attempts at “normalizing” their feelings make them, among other things, unfit to understand the sexual morality of the Church and susceptible to reasonings or theories that serve as moral or religious justifications of homosexual liaisons and contacts. That way, they are — or may become in the course of the years — susceptible to subverting the absolute moral norms of Catholic sexual morality.

The homosexually inclined tend much more to seduce or otherwise molest their preferred sexual partners than heterosexual men,. And, as the vast majority of them prefer adolescents and/or young adults, they are a serious risk group. Their obsessive feelings and accompanying rationalizations and self-justifications dull and obfuscate their moral sense and judgment in this respect. The well-meant statement one finds today in connection with the abuse crises in the Church, namely, that “we cannot say that homosexuals as a category are molesters” is not true. As a category they are, no doubt, many, many times more at risk than heterosexuals to molest youngsters and young adult men. This is a solid statistical fact.

To understand all these facts, we must realize that homosexual inclinations (after puberty) are not isolated desires, but part of a masculinity-inferiority complex, part of a neurotic and personality disorder. Emotionally, these men are (in greater or lesser part) stuck in their teens, emotionally immature and unstable (neurotic).

Homosexuality is a sexual neurosis.

Homosexuality in men implies a deficient identification with masculinity. This affects them emotionally and as regards their character or personality. One important consequence is that they fail in the “father role” when it comes to leading people, being firm, and defending what a man must defend.

A priest should be normally masculine and not have a weak, unmanly character. Another consequence is that homosexually inclined men cannot sufficiently identify with the feelings of sexually normal men and thus cannot adequately lead and guide people as a priest should do. They cannot share many feelings of normal men nor behave like a man ought to in their relationships with women. Thus, their homosexual inclinations affect their relations with people. Priests should be normal like ordinary and mature men.

The sexual abstinence of the homosexually inclined cannot be compared with the abstinence of normal [men]. The fight against homosexual tendencies is similar to the fight of other people with sexual abnormalities, be they homosexuals or heterosexuals (exhibitionists, sado-masochists, pedophiles, transvestites etc.). Their struggle is a moral duty, not a voluntary choice. Their struggle is doubtless meritorious, but it cannot be equalized with the voluntary sacrifice of a (young) man who offers up the use of his healthy sexual faculties. Paying a debt (in money) is not the same as donating a considerable sum of money. (1)

From a religious point of view, it has been argued that the priest as a personification of Christ must be a “full” man, not a man deficient in manhood.

This view has been defended by theologians. It is not my field, but my feeling is that this is the correct view. (2)

Gerard J. M. van den Aardweg, PhD, is a Dutch psychologist and psychoanalyst with a research focus on homosexuality. He is the author of “On the Origins and Treatment of Homosexuality: A Psychoanalytic Reinterpretation” and “The Battle for Normality: Self-Therapy for Homosexual Persons.”

2. E.g., see: “Homosexuality as an objective impediment for ordination to the priesthood” , the doctoral dissertation of Dr. Peter Mettler at the Albert-Ludwigs University of Freiburg, 2007.