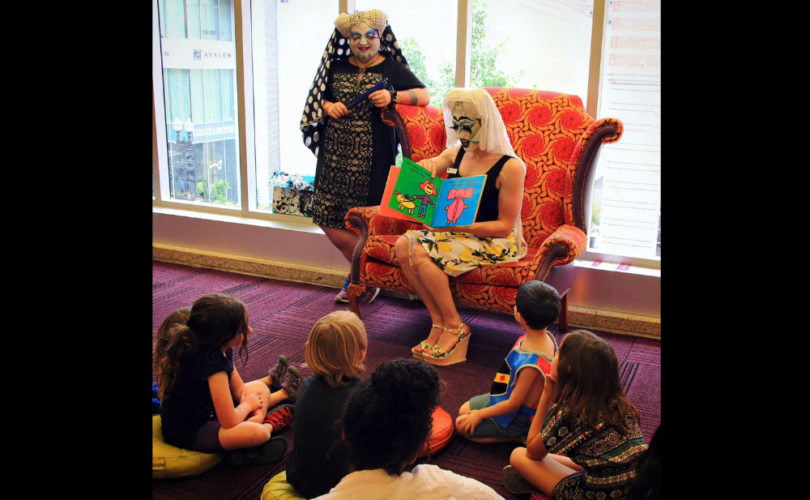 Believing that guilt “chains the human spirit,” the group advocates that every person do whatever their passions dictate.  It uses Christian terms and contorts them to mock the sacraments and church life in general, such as “Sister Inferior” and “Sister Hysterectoria.”

The men call themselves “queer nuns,” even though the anti-Catholic group is openly devoted to promiscuity.  Their slogan is a ridicule of Jesus’ words to the woman caught in sexual sin.  Instead of “Go, and sin no more,” the men “queers” have created their trademark slogan as, “Go forth and sin some more!”

The Boston Public Library not only championed the queer group, but promoted their brand of anti-Christian bigotry to the youngest of impressionable children.  The Boston Children’s Library promoted the self-described queers’ visit on Facebook as well, posting, “Let’s end Pride Month with a drag –Drag Queen Storytime, that is! Join us on Thursday, June 29th at 3:30 for another visit from the Sisters of Perpetual Indulgence.”

Reaction on Facebook was not positive.  The group defends its brand of blasphemy as “irreverent wit,” but faithful Catholics consider it blatant “hate speech.”

“I find this mockery of my Catholic faith quite offensive,” one Facebook commenter posted.  “This is bald-faced bigotry and hatred and the library is allowing it.”

“This is why I don’t bring my kids to the Library,” commented another Facebook user.  “It’s so inclusive unless it’s Catholics, then they can bash and shame… This is child abuse.”

“Is there an honorable liberal anywhere in this country who will speak out against the #antiCatholic bigotry on display here?” the frequent Harvard Law Visiting Professor asked.  “Imagine the chorus of outrage from liberals … were it #Islam and its teachings, symbols, and practices being mocked.”

George, who was Chairman of the US Commission on International Religious Freedom, assessed the “Sisters of Perpetual Indulgence” as simply “one way the sex lib lobby and movement reveal that what they’re really all about is not ‘equality,’ but self-indulgence –hedonism.”

Also dubbed the “Order of Perpetual Indulgence,” the men do not hide their masculine features or facial hair.  Instead, they practice “gender bending,” which is to intentionally present oneself contrary to traditionally accepted male/female roles.

The “queers” marched as women “nuns” in a Resist Trump protest last month as well.

The date of the children’s Drag Queen Storytime, June 29, is a major feastday on the Christian calendar, honoring the holy Apostles Peter and Paul.

The queer men have made a regular practice of creating disorder at Christian services. In 1982, they disrupted an interfaith prayer service at St. Mary’s Cathedral in San Francisco.  On Easter Sunday, the anti-Christian group has blocked off Castro Street for wild parties, complete with “Hunky Jesus” competitions.