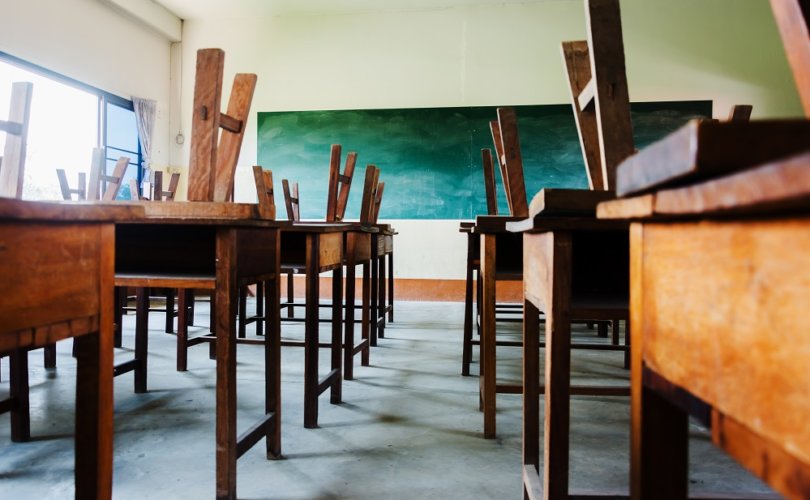 April 29, 2019 (American Thinker) — Education in the U.S. is imploding. The Horatio Alger ideals of education depicting the conditions for successful fulfillment of one's ambitions have been superseded by the ideas and ideals of John Dewey. His ideals enunciated in School and Society and in A Common Faith suggest the replacement of self-conscious, ambitious individuality with the replacement of a highly socialized citizen whose “faith” is in democracy and working together with others as a useful citizen. The great books curricula, popular in the 1890s, was debunked. Despite his romanticization of socialistic concepts (hidden behind the word “democracy,” a tactic not unlike that of Sen. Bernie Sanders), his views represent an attack on the individual, the family, and the foundation of America in Judeo-Christian values.

For millions, school today is simply a developmental requirement with its institutional mores and requirements, a series of hurdles to be overcome and disengaged from as soon as one reaches adulthood. The Deweyan ideal of collectivization and conformity to the industrial demands of mass production of everything from medical care to toilet paper has supplanted the Horatio Alger ideals of pre-industrial, Christian, individualistic American society. Today's updated Deweyans on the left are more apt to admire Alger Hiss than Horatio Alger.

This writer, having spent decades in secondary and higher education, has perceived that the work ethic is eerily absent. Slaves or deprived/oppressed peoples may work hard, but they cannot be said to uphold the work ethic that means a healthy respect and joyful participation in the work at hand as an opportunity coming from a loving God. When we embrace our work with a sense of that work as being part of our moral duty to God and man, we are truly socialized. How many students in our schools have this attitude toward their studies? Or teachers toward their teaching? Instead of study-esteem, we find emphasis on self-esteem. Instead of a vision of becoming a man of competence or knowledge, most educators and students are working toward an implied goal depicted by Abraham Maslow as self-actualization, an ideal of happiness defined as meeting one's needs. Meeting needs rather than competence achieved through knowledge is both a result of and also leads to the left's attachment to the “gimme gimme” philosophy. Meeting my needs is paramount: me, me, me.

School reform has not been addressing this shift in purpose, which defines education as helping the students meet their needs rather than increasing their competence to meet the needs of others and to become better able to exercise their individual liberty. An informed mind in an individual who is disciplined and virtuous is more likely to reach the goal of happiness described by Plato and Aristotle and by Christian philosophers throughout the centuries. Although our happiness on this Earth is always imperfect, nevertheless, when connected to enhancement of individuality, service to others, and competence, happiness becomes more attainable than the vain search to meet one's needs and to “fit in” with some amorphous, mystical vanity called by Jean-Jacques Rousseau “the general will” or by certain social justice warriors “the state of perfect communist equality.”

School reform is feeding the wet dreams of the bureaucratic organizational manipulators and the empires of educational publishers like Cengage, Houghton Mifflin, McGraw Hill, and Pearson, which are turning out billions of dollars worth of educational software. Reform today is a zeal for statistics, systems, savings, software, and for the federal government setting the parameters for this reform rather than local control. Teachers are increasingly being called “facilitators” who guide students through the technological maze. Students whom Dewey wished to see happily take their places in industrial society are now envisioned to be conforming to the work requirements of a technology-driven society. The system becomes the definitive collective dimension into which the well-adjusted person fits in order to meet his or her needs. The dignity and worth of the individual is being sacrificed in favor of this vision or orientation.

As early as 1977, Christopher Lasch, a liberal, in his classic book The Culture of Narcissism: American Life in an Age of Diminishing Expectations, alerted us to the narcissism growing at an exponential rate in society. And as early as 1926, speaking at congressional hearings, the great Princeton professor J. Grescham Machen argued against expansion of federal involvement in education. He argued that education is not a matter of the State, but should be left to each child's parents to educate their children as they please. He prophesied the trend we are now seeing: that uniformity in education always leads to the lowest common denominator. Would the reader agree that the lowest common denominator is found in ignorance, disrespect of teachers, lack of attention, and lack of cooperation?

Does one have to be a professor to see that every moral standard in society is collapsing? Goodness and Judeo-Christian values are openly mocked every day on TV and by teachers throughout the land. In schools, condoms are distributed, and sex education indicates no preference for the love-sex-marriage unity being the best paradigm. This writer taught at one inner-city high school where female students could go to a special counseling office for a ten- or fifteen-minute meeting with a pregnancy counselor, and then be referred for an abortion, without notifying a parent or caregiver, which is legal in my state. Another high school where this writer taught had a yearly Senior Crossdressing Day, where any senior males who wished to could come to school wearing a dress, bra, make-up, wig, high heels, nail polish, and eyeliner.

Schools give us examples of behavior and communicate attitudes of teachers and administrators. Methods of learning and spoken as well as unspoken assumptions about the purpose of gaining knowledge shape our understanding of the purpose and meaning of learning and life. With the schools no longer operating in loco parentis but instead seeking parental support for the so-called mission of the schools, the schools — with many false values — are shaping and negatively impacting our expectations, hopes, decisions, and what matters we focus our attention upon.

The “body of knowledge” for each subject should come back to the fore as the key to a meaningful education and not merely statistics about graduation rates, passing rates on standardized tests, and the implementation of tablets, smart boards, and other software innovations. We also need to restore prayer in the schools, family values, and patriotism (where the inspirational aspects of the USA and Western civilization are placed front and center rather than themes of oppression and victimization). If the reader does not think this is possible, please pray for it.

With Common Core State [sic] Standards, we are on the very brink of the wholly manipulated society (notice: “manipulated,” not educated). Our system of public education is becoming depersonalized and loveless to an extreme. Where knowledge and character building were once paramount, we now find emphasis on self-esteem and neglect of essential intellectual and practical skills. Mass deception and hypocrisy about education have never been more rife.

E. Jeffrey Ludwig is a Harvard University master teacher who has been listed multiple times in Who's Who Among America's High School Teachers and served on the editorial board of the Harvard Educational Review. His latest book, The Catastrophic Decline of America's Public High Schools, is available here. Despite his Harvard training, he continues to believe in local control over schools as required by the Tenth Amendment and is opposed to all elitist takeover strategies.