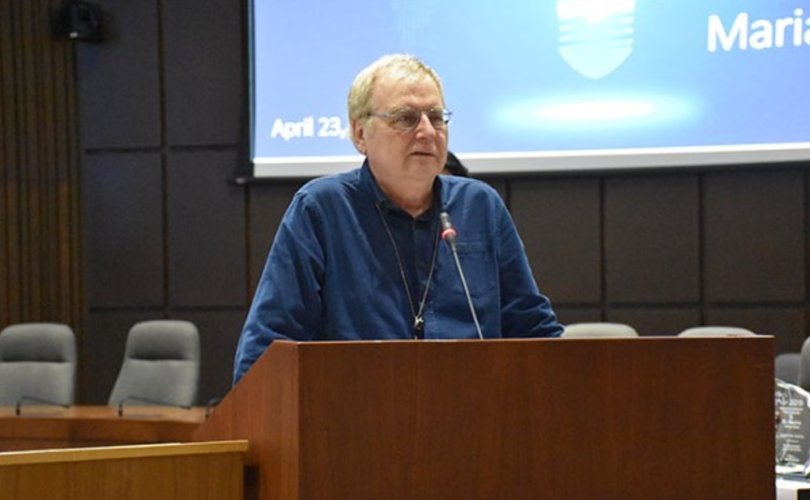 (Campaign Life Coalition) — I’m pleased to report that Toronto Catholic District School trustee Mike Del Grande had a small victory on Day 1 of the inquisition that’s seeking to punish and humiliate him over his defense of Catholic moral teaching with respect to gender ideology!

On Tuesday November 29, one of the judges on the Ontario College of Teachers’ (OCT) Discipline Committee hearing against Del Grande, a Mr. Anthony Jeethan, was asked to recuse himself from the tribunal by Del Grande’s legal counsel.

The defense lawyer introduced a motion stating that Jeethan’s presence on the judicial panel represented “a reasonable apprehension of bias” and a conflict of interest.

Jeethan, one of three judges on the Hearing panel, describes himself publicly as “a queer person of color.” At the hearing, he made a point of saying that the proper way to refer to him was “they/them”. He also requested to be addressed by his preferred transgender pronoun of “Mx” (instead of “Mr.”).

You read that correctly.

Del Grande is in trouble for opposing gender ideology in Catholic schools, and, amazingly, one of the judges was demanding that Del Grande refer to him using a transgender pronoun of “Mx”!

You can’t make this stuff up.

Del Grande is on trial by the College of teachers with the vindictive aim of stripping him of his teacher’s license.

The “crime” he committed was daring to object to a fellow trustee’s motion to add “Gender Identity” and “Gender Expression” to the Toronto Catholic District School Board’s code of conduct policy. He argued it would violate Catholic doctrine.

And for that, an LGBT activist filed a complaint to the College in order to punish Del Grande, using the excuse that his rhetorical device at the school board meeting in which he used exaggeration to demonstrate a slippery slope, was “offensive” to unnamed members of the LGBT community.

He’s a teacher at Lakehead University, and in a recent 2019 article titled Out In the Cold, he admitted to being “an LGBT activist”, “a bullied victim of homophobia”, and wrote that he does “not trust (school) administration”.

This LGBT activist, recruited by the College to sit as a judge, and who would be deciding the guilt or innocence of a faithful Catholic, also wrote that he’s informed by moral relativism and that there is no such thing as “moral truth.”

Could you ask for a more biased court? To top it off, if the OCT finds Del Grande guilty, they could order him to pay for this very expensive proceeding.

The good news however, is that Del Grande’s lawyer, Dr. Charles Lugosi, skillfully proved that an average person who is considering the nature of the complaint against Del Grande, together with Jeethan’s writings, could perceive “a reasonable apprehension of bias” and that the judge would likely find it difficult to be impartial.

Dr. Lugosi’s arguments for the real or perceived bias of Jeethan was so convincing that even the OCT’s legal counsel ended up concurring with his point that the panel member was a self-admitted “activist”!

— Article continues below Petition —
Parents' Pledge: We will pull our children out of explicit sex-ed classes
Show Petition Text
4751 have signed the petition.
Let's get to 5000!
Thank you for signing this petition!
Add your signature:
Show Petition Text

After the concession by the College’s own counsel, Jeethan recused himself from the tribunal, albeit with great reluctance. He will no longer be a judge for this hearing!

This is a small victory, but one worth celebrating nonetheless.

One can reasonably expect that Jeethan’s removal will lessen the overall hostility of the panel towards  Del Grande’s Christian beliefs about transgender ideology.

This is also a symbolic victory.

Canadians never get to see obviously partisan LGBT activists, who have a clear conflict of interest and bias against Christians, recuse themselves from situations in which they have tremendous power to impair the ability of Christians to continue living their faith as they choose.

These types of LGBT activists have grown accustomed to bullying Christians as they please, and getting away with it. So this recusal is quite a rare occurrence indeed. I’m tempted to say it’s worth every penny of Del Grande’s legal expenses!

Would you also consider donating towards Mike’s legal defense fund by clicking here?

Mike is sacrificing his time, reputation and even his health, to stand up for Christian moral teaching when it would be much easier to bend the knee, apologize to the LGBT mob, and get them off his back.

But Mike knows that bending the knee to these gay supremacists will only embolden them to go after others who dare to defend Christian moral teaching from assault by secular humanist ideologies.

He’s doing this also to save our children from indoctrination in the classroom with Gender Ideology. Please make a donation to his legal defense fund now.