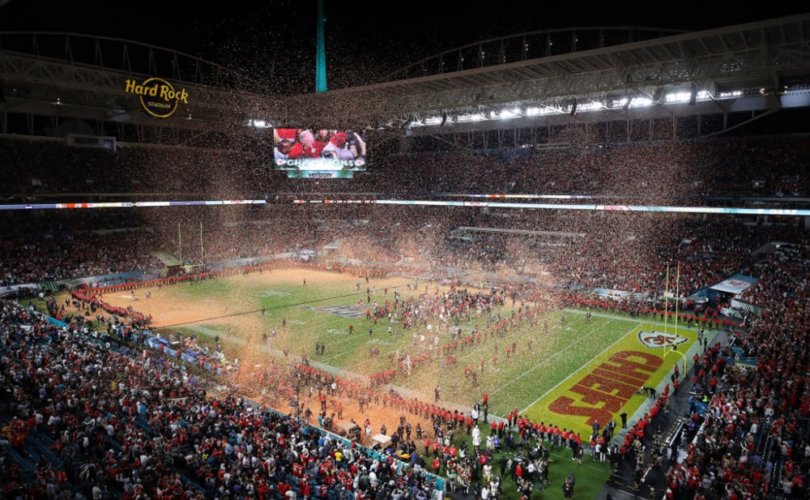 While Olay featured fully clothed female astronauts who were reaching for the stars, the NFL paid Shakira and J-Lo to gyrate and simulate a striptease on the Halftime stage floor in a few strips of sparkly fabric.

While military men and women in uniform were praised and celebrated in the opening Super Bowl ceremony (I tried not to lose it when those four 100-year-old WWII vets were highlighted, especially the Tuskegee Airman — Charles McGee — who carried the commemorative coin to the ref), the NFL reinforced a false #BlackLivesMatter narrative with the distorted ad about the tragic death of musician Corey Jones at the hands of a cop.

While the NFL put on display talented (and worshipped) individuals who could only become super because they weren’t aborted, they denied the airing of an abortion-survivors’ ad that showed how “choice” is never a super option.

Instead they flaunted fake feminism, homosexuality and racial division during the 4-hour event. Granted, there were many amazing ads that had my packed home laughing and cheering. But instead of simply being able to enjoy the game, I had to be the responsible one (with so many young eyes watching) since corporate America takes no responsibility. Actually, I take that back. Corporate America has taken on the responsibility to spread their own warped social gospel.

The NFL wants to look like a champion for justice. But there can never be justice without truth.

The tragic killing of musician Corey Jones (who simply needed help for his SUV that broke down on the side of the road) deserved justice. It doesn’t deserve a Super Bowl ad that, although laudable in some aspects, ultimately exploits his death in order to push the prevailing racialized mainstream media narrative. The 1-minute NFL ad that aired during the Super Bowl fails to provide some crucial clarifying context. So, I will.

The “Inspire Change” ad features an image of a placard demanding, rightfully: “Justice for Corey Jones. We Want Answers!!!” But the NFL never mentions justice was served and answers were provided (although no legal remedy ever makes up for the loss of an innocent human life). Nowhere is the viewer told that Nouman Raja, the plain clothes police officer who killed Corey Jones, was sentenced to 25 years in prison (by an all-white jury, no less). It doesn’t mention what the father of Corey Jones said about Raja’s conviction: “This was about the truth. And the truth caught up with him.”

The NFL ad reinforces, indirectly, the racial accusations of the #BlackLivesMatter movement, yet the imprisoned officer was of Pakistani descent. The Inspire Change initiative doesn’t feature any ad of any white individual being unjustly killed by police, despite the fact that twice as many whites are killed by police as African-Americans. And since the ad invokes the important relationship between police and community, why doesn’t the NFL also air an ad about the 38 officers killed in the line of duty in 2019?

Is the NFL truly trying to inspire change or inspire division? Corey Jones’ horrific death deserves better than a distorted “social justice” ad from a multi-billion-dollar organization that has a history of selectively addressing injustice.

But today’s “social justice” isn’t interested in context and clarity but confusion.

And what was more confusing than the insanely mixed message of an NFL that poured money into an anti-sex-trafficking ad campaign in Miami while hosting a halftime show that resembled a strip club?

Super Bowl LIV’s halftime show sadly proved this (judging by all of the praise from mainstream media and from unexpected places/people online): cultural identification is apparently more important than character formation. But Latino culture was not celebrated during the Pepsi Halftime Show; it was exploited. Sorry, J-Lo. Flashing and grabbing your crotch isn’t empowerment, no matter the “culture”.

As a father of two girls and two boys, I want them to understand that their God-given equality, dignity and worth should be used to evoke love not elicit lust. (I understand this is my Christian worldview, and I can’t expect the world to share it; but fellow Christians should.) I love my two daughters too much to let them ever be objectified or think that being paid millions makes self-objectification ever okay. They’re equal without projecting their sexuality.

Our culture simultaneously denounces sex trafficking (which is rampant in Miami), while celebrating a pornographic show to the world. Florida has been ranked #3 in the nation for human trafficking, which led the Miami Super Bowl Host Committee to launch the “Stop Sex Trafficking” ad campaign throughout the city. An undisclosed amount of funding came from the NFL. But don’t worry, that message was clearly offset by the throngs of nearly naked women and mostly-to-fully-clothed men in the middle of the Super Bowl. It’s just (patriarchal) entertainment, right?

Funny how in this #MeToo era, entertainers seem to vie to be as naked and as sexual as possible — not on a director’s couch, but in front of over a hundred million sets of eyes. J-Lo, Shakira, Pepsi and the NFL let down a generation of girls and boys who deserve so much better than the fake feminism on full display Sunday night.