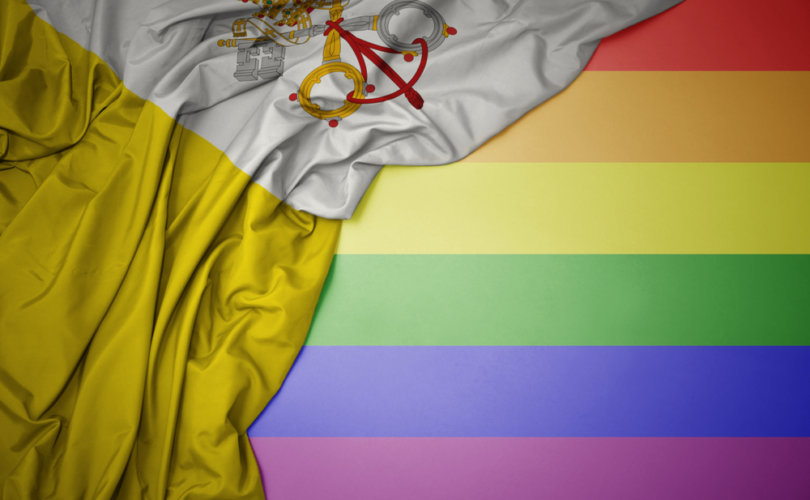 (LifeSiteNews) ­— Will the Catholic Church’s future bring rainbows over Rome? With the current motivation of the 2021–2023 Synod on Synodality, such an outcome is very much on the horizon!

The Church is decidedly at a crossroads, apparently looking for a way out of the crisis by “listening”: a veiled term for a predetermined process of hearing only particular concerns of outspoken critics, activists, and murmurers.

Come on, let’s be honest, this is an all-out bid to embrace active “gay” sexuality and same-sex marriage. Appallingly, a recent papal statement endorsed gay couples who adopt children as an example of being “pro-life.” What? How twisted is the thinking of the Church becoming under its present leadership that it can suggest such a travesty of truth?

As a man who has lived the homosexual lifestyle in the past, I have already walked these wide avenues of thought down which so many cardinals, bishops, and priests now venture. There was a time when I wanted the Church to bend to my way of thinking. I protested, whinged, denounced the Church’s teaching on homosexuality as stubbornly red-necked and devoid of compassion, all while begging for understanding, acceptance, approval, and real change.

Today, unbelievably, what I had once wished for appears to be happening. Ironically, I now find myself on a different walkway altogether, narrower admittedly, but scripturally sound and pitched against such offences to Christ, who calls us to holiness.

It was while I was in the throes of a six year same-sex union that I constantly had moments of light, twinges of doubt about the validity of what I was doing, times when I wondered whether perhaps it was, after all, wrong. My conscience began to be awakened through various circumstances in my life, and these moments multiplied as the inner voice increased in volume. More and more I found myself wanting to resume chastity and the pure simplicity of belonging to Christ without being bonded illicitly to another person, particularly another man. Something inside me was crying out to be solely the Lord’s.

One of God’s chosen mystics, Sister Josefa Menendez, was told that a soul “recovers its original innocence through the Sacrament of penance.” What a beautiful thought, what a beautiful spiritual reality! On contemplating these words, I yearned to embrace this sacramental gift of grace. When, finally, I bared my soul in the confessional, after some especially sensitive counselling and then absolution, it felt like years of sin just peeled off me and set me free.

— Article continues below Petition —
Join Bishops in calling out Pope Francis' statement for contradicting the faith
Show Petition Text
5764 have signed the petition.
Let's get to 6000!
Thank you for signing this petition!
Add your signature:
Show Petition Text

On reflection now, almost twelve years later, I can only view same sex attraction as an affliction. Those engrossed in lustful and gratuitous pleasure will certainly not agree, of course, as pursuits of the flesh blind the intellect and the will. To understand that these pleasures, when continued and left unrepented, lead to damnation, requires a complete change of paradigm. I have found from forgiveness and reconciliation, along with ongoing healing through Christ’s living legacy, the Eucharist and sacraments, an everlasting peace of heart and true liberation.

Sure, chastity and celibacy are not easy choices – particularly in our sexually-oriented culture – but with constant reinforcement of the sacraments of the Church to strengthen us, it gets easier. The challenge of not surrendering to our weaknesses and wayward tendencies is a triumph of spirit. Abstaining doesn’t mean escaping from reality. Visual temptations will continue to plague our imaginations, and even actual seductive invitations can happen, but to exercise our willpower and avoid the drawing power of these allurements by refusing to act upon them is no different to the same challenges which face unmarried heterosexual men. It is a monumental struggle to conquer such deep-seated longings and urges, but with God’s grace one’s mind can be turned in the opposite direction to where it would wish to look.

To crave intimacy, warmth, and to be loved, is of course a raw human need. This fact of life can never be downplayed or ignored. God’s own words were, “It is not good for man to be alone” (Genesis 2:18). Obviously these feelings and inclinations are meant to be satisfied in the normal channels of conjugal love. Our disordered nature, however, tends to take over and sensuality can rule the day.

In a book called “Dying to Meet Jesus”, an American man, Randy Kay, describes his near-death experience where he met Jesus face to face. He tells how the Lord leaned into him, cheek to cheek and hugged him with “an intensity of love beyond explanation.” The overwhelming love and warmth which surged through him brought a deep sense of true belonging with a desire to never be separated from Jesus but to remain forever in his close company.

Apart from the impact of a fatherly absence in my own unstable early years, I began to wonder if, deep down, this need for male-to-male contact and closeness may be my spirit wanting absolute union with Christ: seeking to be wrapped in the purest all-consuming love of God devoid of any carnal overtones. St. Augustine said, “You have made us for Yourself, O Lord,” and the “human heart is restless until in rests in You.”

Meanwhile, the Church forges relentlessly ahead under the misguided notion that pandering to society’s widespread “modern” outlook she will bring young people into the pews and win popularity as part of an unrealistic “new evangelism.” Christ’s Mystical Body is being transformed into a type of democratically-directed body, governed by popular post-Christian persuasion and, sadly, the synodal inclination to subvert Catholicity into a new “welcoming Church” (a euphemism for accepting same sex unions) will  consequently exclude God and His commandments.

Unlike the “narrow way,” this newly renovated “synodal way” will actually become a broad highway to hell, with a nice, comfortable, cosy exterior of love, but only in the humanistic sense of the word, not Divine Love.

The true teachings of Christ and Scripture are “the Way, the Truth and the Life,” and they are much more challenging: they focus on repentance, conversion, growing in holiness and purity in the distinct understanding that nothing unclean can enter heaven. At the Traditional Latin Mass where I attend, the priests staunchly uphold Church doctrine and the young people are flocking there, discovering true leadership. Baptisms and vocations are flourishing!

For some perverse reason the “rainbow” movement has hijacked God’s special arc of promise and reinvented it as a symbol for its own political ends. Even worse, the LGBT and transgender ideologies are now enveloping innocent children, teaching the false notion that they can “choose” their gender. This has to be the final rebellion against God: telling Him His creation of the human person, male and female, is incorrect, and that we know better.

So should the Church, then, be inclusive? Of course it must. Are we to build bridges? There’s nothing wrong with that. But should official sanction be given to active gay sexuality? No, the Church can never do that, just as the Church can never approve of heterosexual fornication outside marriage, despite the papal nod given to couples living in sin.

While acceptance and understanding are always essential for same-sex attracted men and women and couples, Holy Mother Church cannot condone or officiate over these unions as she stands as an authentic representation of Jesus Christ and the Law of God. We must always be a welcoming Church, but actual reception of the Holy Eucharist is always reserved exclusively for the catechized that are in a state of grace. The liturgy highlights that in receiving Communion sacrilegiously, we bring judgement and condemnation upon ourselves.

Therefore, should the recommendations of the ongoing synod eventually be absorbed into doctrinal acceptance, much the same as a previous synod brought approval to the aberrations of Amoris Letitia, this final stage in the demolition of Catholic moral absolutes is going to lead hundreds and thousands of souls into perdition. To confirm these souls in their sins – is that truly an act of love?