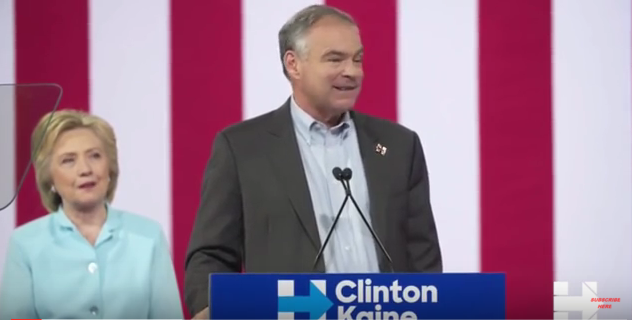 July 29, 2016 (ALL) — Senator Tim Kaine has been nominated for the position of vice president of the United States. As a nonprofit educational organization, ALL does not comment for or against any political candidate. But, as a Catholic organization, we do comment on any candidate who claims to be a faithful Catholic and publicly acts contrary to the teachings of the Church. This commentary is intended to call on Senator Kaine to obey Canon 916 and on all bishops and priests to obey Canon 915.

There are a couple of things about Tim Kaine that apparently a lot of people neither know nor understand.

Democrat Tim Kaine has been defined by the media as a Catholic who is “a Catholic—and personally pro-life,” a man who “says his views on the issue have not changed over his career. But asked if he would characterize himself as ‘pro-life,’ [has] said: ‘I've never embraced labels.’” In addition, he has been described as a man with a “complicated stance on abortion” and a man who “defies the religious stereotype.” These are not ways in which a faithful Catholic should be proud to describe himself.

These definitions of Kaine’s position on abortion are confusing, of course. But that is because the man himself is a dyed-in-the-wool supporter of abortion who has chosen to use his Catholic background as a mantle to misrepresent his true nature. Naturally, the media is all too pleased to collaborate in this charade.

And as surely as night follows day, Planned Parenthood’s words clinch the deal: “He has voted over and over to protect access to care at Planned Parenthood health centers for people who rely on public health programs.”

Apparently Kaine is a self-identified Catholic who has never learned the meaning of the words “intrinsic evil.” If he had, he would do everything in his power to advocate for the total protection of preborn children rather than their killing by barbaric methods that I prefer to define as acts of terrorism perpetrated against the innocent preborn.

What is going on? Why haven’t the bishops done anything about this problem? Where are our heroes?

Well, we did find a couple of them, but we also found a statement from Kaine’s bishop that sort of gets in the way of truth and explains a whole lot. Let’s start with him—Bishop Francis X. DiLorenzo of the Diocese of Richmond, Virginia. In a statement about Catholics in politics, he said, “We continue to maintain an open communication with public officials who make ongoing decisions impacting critical, moral and social issues. . . . It is the duty of all Catholics, no matter their profession, to decide through an upright and informed conscience as to their worthiness to receive the Sacrament of the Holy Eucharist.”

In other words, Mr. Kaine, even though you have publicly advocated for abortion, your bishop will not instruct you on the reasons why, until you repent of your public advocacy of acts of abortion, you should not be allowed to receive the body and blood of Christ. Your bishop would prefer to pussyfoot around, enabling your scandalous public advocacy of abortion and other grave matters to go unnoticed and ignored.

On the other hand, there are those who make no apologies for their public defense of truth, such as Dominican priest Thomas Petri, the vice president and academic dean of the Pontifical Faculty of the Immaculate Conception at the Dominican House of Studies. He tweeted to Kaine, “Do us both a favor. Don't show up in my communion line. I take Canon 915 seriously. It'd be embarrassing for you & for me.”

Senator @timkaine: Do us both a favor. Don't show up in my communion line. I take Canon 915 seriously. It'd be embarrassing for you & for me

And therein lies the truth of the matter. As Kaine continues to take actions and make statements that expose his hypocrisy, there are brave men of God in our midst who are willing to call him to account.

Mr. Kaine, you cannot have it both ways. While the media is raising Kaine, we observe that this translates to despising Christ and His truth.

Mr. Kaine, you should be ashamed.