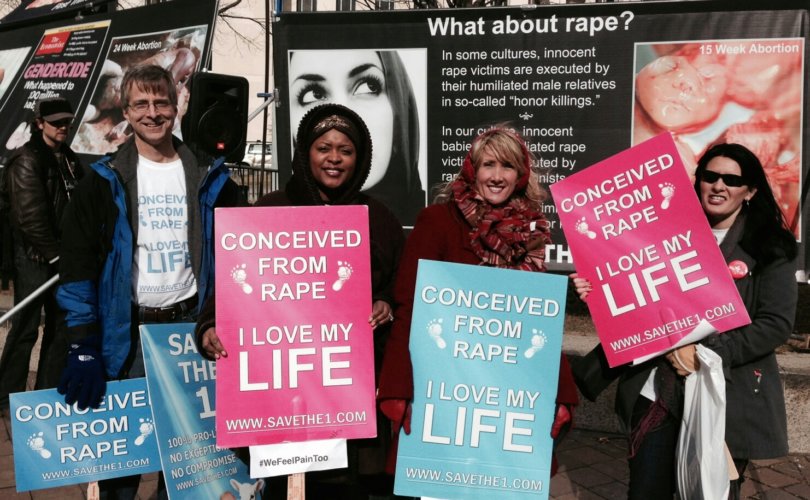 January 26, 2017 (Save the 1) — In this new and fully Republican-controlled legislative session, the 115th Congress, there are currently seven pro-life related bills which have been introduced.  There are an infamous five of them which Save The 1 would like to call to your attention and voice a strenuous objection to, as currently written.  Why object to a pro-life bill? All 5 contain a rape exception.

HR7, just passed in the House on January 25, 2017, is attempting to defund abortions, including via the Affordable Care Act, also known as Obamacare.  The 20-week ban, called The Pain Capable Unborn Child Protection Act — HR36, is back with the rape exception included . . . again.  HR217 is intended to eliminate abortion funding through Title X, except in cases of rape.  HR354 is a standalone “Planned Parenthood defunding bill” unless the abortion provider says the woman was raped.  HR490 is an attempt at an abortion ban after a fetal heartbeat is detectable . . . except in cases of rape.  (We do not yet have the official wording of this bill to verify on congress.gov, but an unofficial draft circulated by the American Life League includes a rape/incest exception.)

The other two exception-free bills are: HR37, The Born Alive Abortion Survivors Protection Act; and HR586, Human Life Begins At Fertilization. We commend the bill sponsors for providing equal protection.

So, once again, lawmakers, those organizations which endorse them, and pro-life leaders and organizations which approve of and recommend public support of these laws, feel as though they have the right to negotiate away the right to life of the rape and incest conceived.  Repeatedly, the pro-life leadership in Washington allows the politicians to define what it means to be pro-life.

However, we at Save The 1 object to these bills as is. 1) We are persons too, so it is personal. It is our lives placed within the crosshairs — these laws with exceptions are dehumanizing, demoralizing, and would have put our preborn lives at risk years ago, but most importantly, put others similarly-conceived at risk today. 2) We also object for long-term pro-life strategic reasons and present day, real world enforcement reasons.

There have been promises for decades, claiming that the exceptions strategy will change, and that compromised, exceptions-laden laws will be “fixed”.  As we see in these bills, we are nowhere near the fulfillment of those promises.  When will these master strategists finally know that it is time to end the rape exception era in Washington?  What, specifically, has to happen?  Strange, because contained within that oft-repeated promise is a realization — an actual admission — that something is wrong.  You don’t have to fix something which is not broken. So, they are actually confessing that the “exceptions” strategy is a broken strategy.

And it is indeed a broken strategy because of the huge, unenforceable loophole which is created by adding exceptions to pro-life laws.  What is created is a self-negating law.  We are handing enforcement of these laws to Planned Parenthood and other abortion clinics.  These entities are already not following the laws which are in place.  Consider Lila Rose’s Live Action Planned Parenthood stings exposing Planned Parenthood covering up underage rape cases. It's counter-intuitive to now trust them with victims of sexual assault!  Is there anyone policing all of these clinics in a substantial way?

It is a broken strategy because any exception we hand the abortion industry will lead to more.  Additional exceptions would no doubt be sought by the pro-abortion side, should, by some future effort, an abortion ban with a rape exception pass into law. These added exceptions would be only a court decision away from being implemented, as the rape exception is given force of law by OUR side, keeping abortion legal forever.

It is a broken strategy because, in an effort to placate those of us objecting to the addition of a rape exception to a pro-life law, certain oversight or safeguard provisions are added, attempting to ensure the exception loophole would not be abused or negated.  The pro-abortion forces in Congress object almost as strongly to a law with (attempted) restrictions attached to the rape exception as they would to a principled law with no exceptions at all, as we saw with Renee Elmers and her five Republican women.

What happens when these bills get debated in Congress?  The pro-abort congressmen, one after another, try to present a sympathetic case that abortion is compassionate and protective of women after a rape conception.  We are armed with the truth of what it takes to support a woman through her trauma after rape while also protecting her baby.  When there is a rape exception in a law, pro-life legislators are prevented from telling life-affirming stories, full of hope and redemption, of mothers from rape/incest, or rape/incest-conceived individuals.  These stories would overwhelm the darkness of the pro-abortion side.  Without a positive pro-life counter argument, the other side actually (albeit, erroneously) appears more compassionate towards the pregnant rape victim and we lose in the court of public opinion — even if the bill ultimately passes.

It would be extremely effective to add the testimony of the mothers from rape and their rape-conceived children. Save The 1 has a database of over 450 with these stories who want to make a difference. Although we've stood ready and waiting, offering our life stories to the process, we have inexplicably never been asked or invited by the pro-life leaders in Washington.

It is a broken strategy because it throws rape-conceived babies under the bus and tells those of us similarly conceived who have been born, “Your lives are less valuable.”  Laws with exceptions allow the death penalty for the rape/incest conceived babies, while the rapist receives a lesser sentence or none at all. Approximately only 1% of rapists are ever convicted of their crime, as charged.  Furthermore, rape-conceived babies feel pain like everyone else.  Our hearts beat like everyone else's.  Yet, these laws forsake us and even put a price on our heads.  Our executions are paid for with tax dollars.

It is a strategy filled with the hypocrisy of those who are “personally against the rape exception,” but willingly support the exceptions in law. Sacrificing the lives of children conceived in rape is still child-sacrifice — a deplorable practice through the ages. Who is it protecting? Not rape victims when they're four times more likely to die within the next year after an abortion. Our lives are sacrificed to protect certain politicians and to protect the favor of pro-life leaders among those politicians.

Pro-life leaders in Washington treat our lives as so negligible that in social media and press releases, there is not even a footnote mentioning that a rape exception is included in the legislation.  We’ve been told by pro-life leaders that the grassroots doesn’t need to know about the exceptions — that you are better off not knowing.  Why don’t they have the courage to publicly admit their support of rape exception bills and their embracing of an exceptions strategy?  Why is this the dirty little secret in the pro-life movement?  It is amazing how many people tell us that they never knew there were exceptions in various laws and policies, including the Mexico City policy just celebrated. And why are there so few pro-life leaders sounding the alarms?

We hasten to ask: Who wouldn’t vote for a clean, no-exceptions bill at this moment in political time?  Are those supporting these laws with exceptions saying that a clean law is “too pro-life” and would not pass?  At the state level, things are much different.  Michigan and Georgia, for example, have kept the rape exception out of their pro-life laws — completely.  It just takes the will — the strategy — to do it.

We encourage you to visit the Congressional website and check out this group of bills and read the discriminatory and impotent exceptions language.  Some of the bills make an attempt at (unenforceable) exceptions regulation, auditing standards and reporting requirements; some have no regulation at all.  It is a complete, convoluted mess.

Please join us in our objection to the exceptions included in this pro-life legislation in Congress.  Here is a list of the proposed laws, the main sponsor’s name and contact information. Please contact the offices of the following members of Congress, and also your own U.S. representatives, to demand a higher standard: 100% pro-life, no exceptions.  Let’s not allow the politicians to define what it means to be pro-life.  Please show the congressmen that there are still people who care about our lives.

Jim Sable is a husband and father of 4 — 3 biological sons and one recently-adopted daughter from China. He and his wife Wendy are both adopted. Conceived in rape, Jim is also a Board Member, national pro-life speaker and pro-life blogger for Save The 1. Reprinted with permission from Save the 1.