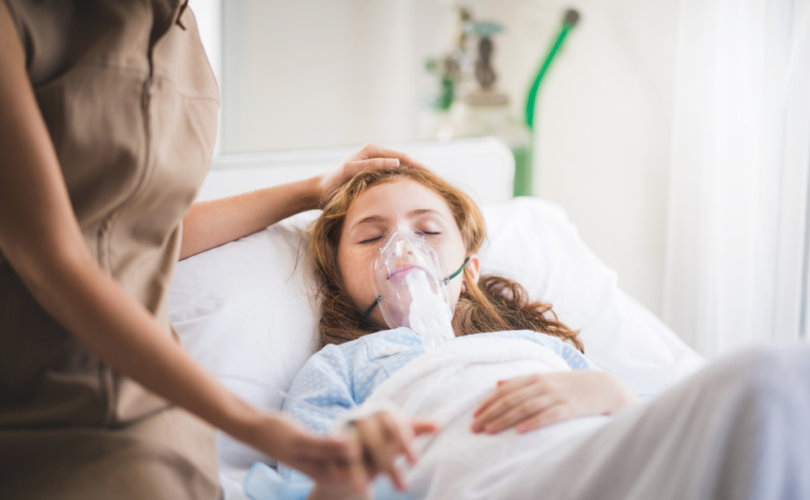 April 29, 2019 (Renew America) — The “dead donor rule” — a person must be dead before his vital organs are extracted for transplantation — is the basic principle guiding organ donation. A dead body is a corpse. Excising vital organs from a corpse does no harm. But, if we are not certain the individual is dead, removing vital organs is a grave matter.

The Catechism of the Catholic Church (2296) states: “… it is not morally admissible directly to bring about the disabling mutilation or death of a human being, even in order to delay the death of other persons.” Furthermore, even though Pope John Paul II stated that organ donation is an act of charity, in Evangelium Vitae (n. 15) he cautioned: “Nor can we remain silent in the face of other more furtive, but no less serious and real forms of euthanasia. These could occur for example when, in order to increase the availability of organs for transplants, organs are removed without respecting objective and adequate criteria which verify the death of the donor.”

We have been asked, “How and why does HALO [the Healthcare Advocacy and Leadership Organization] differ from the National Catholic Bioethics Center's position on 'brain death' and the use of 'brain dead' individuals as organ donors?” This paper is HALO's answer.

HALO's position is that a diagnosis of brain death does not mean that it is morally (or scientifically) certain the person is dead. Therefore, the practice of removing vital organs from “brain dead” individuals should be suspended and alternative means for extending the lives of individuals with failing organs should be pursued.

We do not disagree with Father Pacholczyk's fourth assertion. However, after diligently searching for the answer to our question (this paper's title), we have reached an uncomfortable conclusion: If physicians wait long enough to be certain that all functions of the entire brain have irreversibly ceased — that is, that the person is truly dead — the deceased person's organs will have begun to deteriorate and therefore will not be transplantable. If the goal is to salvage healthy organs, haste is of the essence in determining brain death. Haste can lead to cutting corners and to errors. Also, as Pope John Paul II suggested, furtive euthanasia may occur as a means of increasing the supply of transplantable organs. (This is a reasonable concern since organ transplantation is a very lucrative business and “the love of money is the root of all kinds of evil…” — 1 Timothy 6:10).

To address Father's first assertion, it is necessary to ask a question. How is it possible to establish “the complete and irreversible cessation of all brain functions” when the person is exhibiting signs that some parts of the brain are functioning — signs which we can see with our own eyes?

Should We Believe Our Senses?

When our senses tell us someone is alive, but doctors tell us he is dead, what are we to believe? Two things which contradict each other cannot both be true. A human being is either alive or dead.

Before organ transplantation was possible, physicians made every effort to judge the moment of death in the direction of protecting life from a death-dealing mistake. Circulation and respiration had irreversibly ceased — the body was cold, blue and stiff. Our senses told us that the person was dead.

The legal definition of brain death is “the irreversible cessation of all functions of the entire brain, including the brain stem.” Yet “brain dead” patients display signs that their brains retain many essential functions. [2]

If a person who has been determined to be brain dead is truly dead, then our senses are deceiving us.

Pursuing the Truth Wherever It Leads

There are good people who support vital organ donation after a determination of brain death and good people who oppose it. It is not HALO's purpose to judge anyone who has decided to donate organs or to undergo transplant surgery. We do, however, strongly suggest that people consider all the evidence before making these decisions and prior to taking a position on this crucial moral issue.

Renowned theologian Christian Brugger believes there is reasonable doubt that “brain dead” bodies are dead and concludes, “Since we should not treat as corpses what for all we know might be living human beings, it follows that we have an obligation to treat BD individuals as if they were living human beings.” [3] Dr. Paul Byrne and other experts in the fields of medicine, philosophy, and theology explain why they maintain that “'Brain Death' is Not Death” in an illuminating essay by that name. [4] HALO highly recommends reading this brief, yet thorough set of arguments against using neurological criteria alone to determine death.

John Haas, President of the NCBC, says that those who express doubt or deny that brain death is true death “create confusion in the minds of a number of the faithful” and “run the risk of unsettling the consciences of the faithful on a life-and-death ethical matter for which the authentic magisterium of the Church has provided clear guidance.” [5] However, we find Church guidance on this matter to be anything but clear and interpretations of Church guidance vary widely. Brugger, Byrne, Pacholczyk, and Haas are just a few of the many Catholic experts who express differing positions on “brain death.” (Perhaps this is a topic for another paper.)

The evidence HALO has thus far examined leads us to agree with the experts who say we cannot be morally certain that a person who has been declared “brain dead” is truly dead before organs are removed. But we will never cease our search for the truth. At the very least, those who believe brain death is death should concede that this is one diagnosis where doctors need to be correct 100% of the time — and, for the sake of all who trust them, admit that there is a growing body of evidence that this diagnosis is not accurate in at least some cases, and perhaps in many cases.

Father Pacholczyk asserts, “Genuinely brain-dead individuals never 'wake up.'” Every time a recovery occurs after a determination of brain death we are told the diagnosis was wrong; that perhaps corners were cut in testing, or mistakes were made, or the person doing the testing was not qualified, etc. Thus, how can anyone know for certain that a person is “genuinely brain dead?” The only way is to wait and see.

People who have been determined to be “brain dead” using the most rigorous neurological criteria have awakened and recovered. It is safe to say that they would not have recovered had they been stripped of their vital organs before their injured brains could begin to heal. Here are two cases in point.

Trenton McKinley, a 13-year old Alabama boy, was declared brain dead after suffering skull fractures and a traumatic brain injury in March 2018. He reportedly passed all the tests for determining brain death. His mother signed papers to donate his organs. Fortunately, he regained consciousness before his vital organs were removed. Trenton was taken off the ventilator and eventually went home. He is now conscious, walking and talking. [6]

In 2007, Zach Dunlap, a 21-year-old Oklahoman, flipped over on his 4-wheeler and suffered catastrophic brain injuries. Thirty-six hours after his accident, doctors at United Regional Healthcare System in Wichita Falls, Texas determined he was “brain dead.” They had subjected Zach to a battery of tests including a scan that showed a complete absence of blood flow to the brain. Preparations to harvest his organs were underway when a relative scraped the bottom of his foot with a pocket knife and he jerked his foot away. Just months later, Zack was walking and talking. He recalled hearing a doctor say he was dead and being “mad inside” but unable to move. [7]

Father Pacholczyk also maintains that “there is usually a period of only a few days that it may be possible to extend the functioning of [brain dead individuals'] organs by keeping them on a ventilator.” We point out that some people who have been diagnosed as brain dead have lived for years even though they have not made remarkable recoveries. For example:

On December 9, 2013, 13-year old Jahi McMath underwent surgery to remove her tonsils and adenoids at a children's hospital in Oakland, California. Shortly thereafter, she started to bleed and suffered cardiac arrest. She was declared “brain dead” three days later. Her family disagreed with the diagnosis and fought for Jahi's life when the hospital sought to remove her life-support. Keeping her alive required moving her to New Jersey. Bobby Schindler, President of the Terri Schiavo Life & Hope Network (https://www.lifeandhope.com/), explains: “After Jahi was ruled to be brain dead, she and her family found themselves in an incredible situation wherein Jahi was considered legally dead in California, but legally alive in New Jersey due to that state's religious accommodations.” Jahi's mother took excellent care of her at home. Jahi breathed with the aid of a ventilator. She responded appropriately to commands and underwent pubertal development. Her true death occurred on June 22, 2018. Her death certificate, completed by the NJ physician treating Jahi, listed her cause of death as bleeding as a result of liver failure. Various news outlets subsequently reported that Jahi McMath had died, underscoring the fact that Jahi was a living human being for four and a half years after being issued a death certificate in California. [8] To learn more about Jahi's condition read “The Case of Jahi McMath: A Neurologists' View” by D. Alan Shewmon, The Hastings Center Report, December 25, 2018 (https://onlinelibrary.wiley.com/doi/10.1002/hast.962).

Father Pacholczyk contends that such cases “indicate a failure to apply the tests and criteria for determination of brain death with proper attentiveness and rigor.” This explanation is not reassuring for people who have signed up to be organ donors, trusting that doctors don't make erroneous declarations of death.

One final point. There are many different sets of diagnostic criteria that may be used to determine brain death. A person who would be declared brain dead in one hospital could be considered alive and receive potentially life-saving treatment in another hospital.

Even if you believe that brain death is true death, consider that you do not know where you might be hospitalized in the event you suffer a severe brain injury. What criteria will be used to determine brain death? Will the doctors who do the testing be qualified, careful, and honest? Will your organs be more important to them than your life?

“Should I Refuse to Be an Organ Donor?” Is a Prudent Question

Let us be clear. HALO does not reject vital organ donation by itself. We question the validity of brain death, particularly when “brain dead” individuals are slated to be organ donors or when a brain death determination is made not in order to be certain a patient is truly dead, but to justify stopping all life-sustaining treatment. Our position is compatible with the Church's position. The Catholic Church is not opposed to organ transplantation but insists that persons must not be killed in order to procure their organs or for any other reason.

HALO cautions people: When in doubt, err on the side of life. We advise that you sign a wallet card refusing to be an organ donor [9] and carry it with you at all times, but the decision is up to you.

[5] John M. Haas, “Catholic Teaching regarding the Legitimacy of Neurological Criteria for the Determination of Death,” The National Catholic Bioethics Quarterly, Summer 2011.