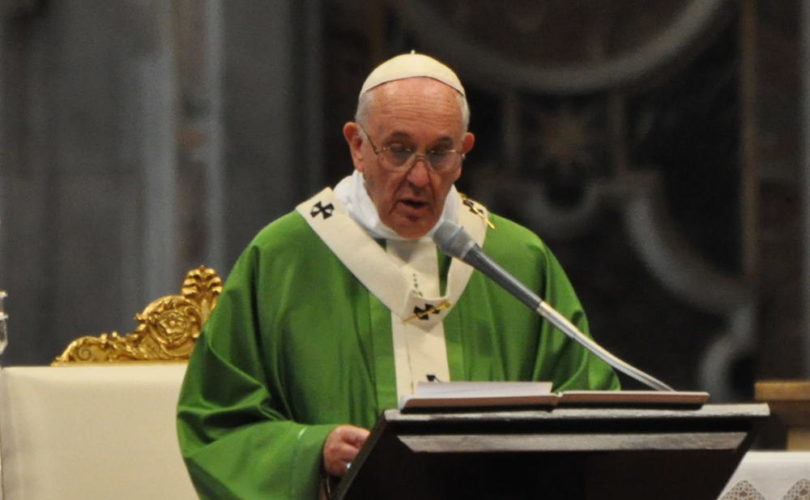 November 16, 2016 (CatholicCulture) — We should not be surprised that the Pope has declined a request for clarification of Amoris Laetitia. Are faithful Catholics confused by that document? Absolutely. That is the Holy Father’s intent. The confusion is not a bug; it’s a feature.

The defenders of the papal document (and those defenders are becoming downright belligerent; see below) insist that the notorious 8th chapter is clear enough, and that the four cardinals who have raised questions about its meaning are merely being argumentative. But if that were the case, the Pontiff could have avoided this public embarrassment by answering the cardinals’ questions. He chose not to do so.

There are only two possible ways to interpret the Pope’s silence. Either he is being remarkably rude to the men who are his closest counselors, flatly refusing to answer their honest request, or he does not want to give a straight answer. Or both.

The one possibility that can be quickly excluded from our discussion is that the Pope believes the interpretation of Amoris Laetitia is already clear to the faithful. It is not. After two years of intense debate on the most controversial question involved — whether divorced and remarried Catholics may be admitted to Communion — intelligent and informed Catholics are still unsure as to what, exactly, Pope Francis has taught us.

If the papal teaching is clear, how can it mean one thing in Poland, and another in Germany? If the final answer to that vexed question is No in Philadelphia and Portland, how can it be Yes in Chicago and San Diego? If some bishops are interpreting the papal document incorrectly, why have they not been corrected?

Since the revelation that this massive confusion prompted four conscientious cardinals to press the Pope for clarification, several people have asked me how long it ordinarily takes for a Pope to respond to dubia of this sort. There is no good answer to that question, because there is no precedent for this query. Ordinarily, papal documents are clear. If any confusion arises from papal statements, a clarification usually follows quickly — long before any formal dubium could be raised — because the very point of papal teaching is to provide clarity. Usually. But this is a different case.

In any case, nearly two months have passed since the cardinals raised their questions. During that span the Pope has found time for at least two lengthy conversations with his friend Eugenio Scalfari, the leftist journalist. Is it unreasonable to suggest that he should have also found time to speak with four troubled members of the College of Cardinals?

Actually the Pontiff did meet with one of those prelates, Cardinal Raymond Burke, in a private audience on November 10: just a few days before the cardinals made their query public. I have no special knowledge about what took place during that audience, but it is inconceivable to me that Cardinal Burke, who is punctilious in his observance of ecclesiastical propriety, would have failed to raise the matter directly.

(The next day, the Pope met in another private audience with Cardinal Gerhard Müller, the prefect of the Congregation for the Doctrine of the Faith (CDF), who had also received the cardinals’ letter with its list of dubia. Was the topic raised again, I wonder? If so, what instructions did the Pontiff give Cardinal Müller? All we know is that the four cardinals did not receive a response to their questions.)

Cardinal Burke and his three confreres have interpreted the Pope’s silence as an invitation to further discussion of the questions among the faithful. That is, frankly, a charitable reading — especially since the topic has already been discussed so exhaustively for so many months.

John Allen of Crux has a different reading of the Pope’s intentions: “Maybe this is his version of Catholic R&D, letting things play out for a while on the ground before he says anything irreversible.” In other words, maybe the Pope is deliberately creating room for pastoral experimentation, to see what works. Archbishop Mark Coleridge of Brisbane, Australia seems comfortable with that approach. “Pastoral care moves within ambiguity,” he wrote on his Twitter account. In a bit of a slap at the four cardinals, he added: “We now need a pastoral patience not the quick-fix anxiety voiced here.”

(Speaking of quick-fix anxiety, could I digress for a moment, to ask why the leadership of the Catholic Church has been fixated on this question for the past two years? Where — outside of Germany — is the enormous demand for a change in Church discipline on this matter? Where are the outcries from the faithful? At a time when families are imploding, children are abandoned, and a steadily decreasing number of Catholics even bother with sacramental marriage, how can any rational cleric believe that this is the question most urgently in need of attention?)

However, if John Allen and Archbishop Coleridge believe that the Pope is encouraging experimentation by leaving matters unsettled, another observer — one much closer to the Pope — insists that the meaning of Amoris Laetitia has been settled. Father Antonio Spadaro, the editor of La Civilta Cattolica, reacted to the four cardinals’ public letter with a multi-lingual Tweet-storm of harsh statements.

“The Pope has ‘clarified.’ Those who don’t like what they hear pretend not to hear it!” Father Spadaro wrote. He attached a link to an informal letter the Pope wrote to bishops in Argentina, approving of their interpretation of the document. But of course a leaked letter, even from the Roman Pontiff, is not a magisterial document. And the Argentine bishops’ reading of Amoris Laetitia left plenty of questions unanswered; it did not, for instance, address the dubia raised by the four cardinals.

Later Father Spadaro tweeted again: “Amoris Laetitia is an act of the Magisterium (Card. Schönborn) so don’t keep asking the same question until you get the answer *you* want … ” Now, obviously, he was taunting the beleaguered cardinals. He was certainly not answering their questions about how this “act of the magisterium” should be understood; he was telling them to stop asking pesky questions.

Father Spadaro plays a special role here — indeed he might be accused of conflicts of interest when he responds to critics of the papal document. The Jesuit priest is widely acknowledged as one of the closest advisers to Pope Francis, and often credited with a major role in drafting Amoris Laetitia. So if he wants cardinals to stop asking difficult questions, it is not unreasonable to suspect that the Pope himself wants to bury those questions. And the Pope’s silence conveys the same message.

Why would the Pope avoid answering questions? Why would he allow the confusion to persist? Perhaps because he wants to allow something that goes beyond experimentation: a de facto change in Church discipline, which will entail a de facto change in Church teaching. Perhaps because he realizes that if he makes his intentions clear, loyal Catholics will not accept them.

Thank God for four stalwart princes of the Church who, without accusing the Pope of an attempt to change Catholic doctrine, have made it clear that if that is his intention, they will resist.