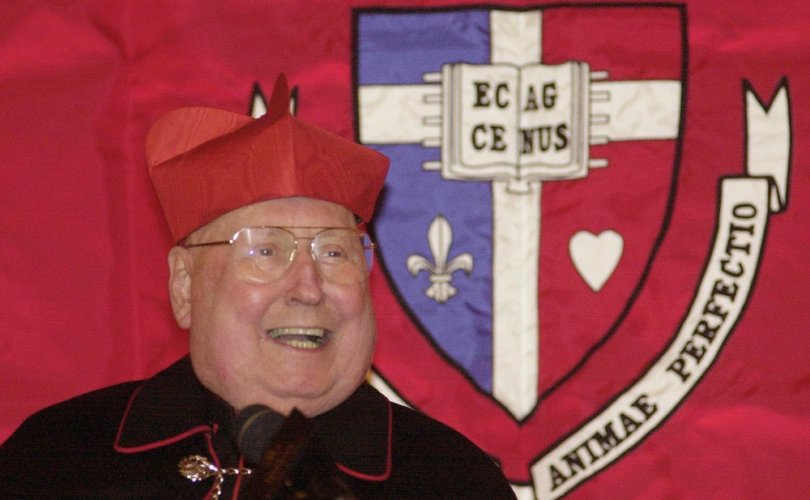 May 1, 2020 (LifeSiteNews) – Not everyone gets a two-minute standing ovation at his own funeral, but Cardinal John J. O’Connor was not everyone.

Delivering a homily for his friend on May 8, 2000, Cardinal Bernard Law reminded thousands of mourners inside Manhattan’s St. Patrick’s Cathedral of the “great legacy” Cardinal O’Connor left “in his constant reminder that the Church must always be unambiguously pro-life.”

A thunderous applause broke out and then those in the back of the cathedral began to stand up, initiating a wave that swept to the front of the church and eventually prodded even pro-abortion President Bill Clinton and his wife Hillary Clinton to stand (though not applaud).

“I see he hasn’t left the pulpit,” Cardinal Law quipped.

May 3 will mark 20 years since Cardinal O’Connor’s death, and for me, he is still in his pulpit.

The cardinal was an exemplary priest and bishop, teacher and leader. Catholics rightly take pride in how he gave witness to the faith and to what the Church is all about. Priests and bishops drew strength for their ministry by following his example.

But his appeal, much like that of his friends-turned-saints Mother Teresa and Pope John Paul II, extended far beyond the Catholic world. He was a witness to humanity, to its meaning and its dignity. His ecclesiastical motto was “There can be no love without justice,” and he was committed to promoting both.

Cardinal O’Connor eased racial tensions, helped resolve labor disputes, held starving children in Ethiopia, intervened in crises in Cuba and Central America, and much more. Yet his motivations were not secular; they were rooted in Christ. That accounts for what the world sees as the paradox of a man whose compassion was as strong as his orthodoxy.

He taught unapologetically, for instance, that homosexual activity was contrary to the teaching of Scripture and the Church. Yet he opened New York state’s first AIDS-only unit, at St. Clare’s Hospital, and gave thousands of hours of personal volunteer service to the AIDS patients, emptying their bedpans and tending to their other needs.

He was loud and clear about the immorality of abortion. Yet from his first moment in New York, he issued an urgent invitation to any woman anywhere who felt tempted to abort her child. “Come to me,” he said. “The resources of the Archdiocese of New York will be at your service to assist you and your child.” It was a promise he repeated continually.

The cardinal came to New York the same year I began theology training at St. Joseph’s Seminary near Yonkers and he fanned the flames of my pro-life passion because he was on fire for the unborn. He made it clear to the whole nation, time and time again, that protecting the unborn was issue number one.

Cardinal O’Connor ordained me in 1988 and he gave me permission five years later to work full-time in pro-life ministry. Even before that, he was instrumental in the founding of Priests for Life after he established the Sisters of Life.

Priests for Life began in 1991 as an outreach to Catholic priests and its mission was to help empower these priests to become better advocates for life. When the cardinal allowed me to take over the fledgling organization in 1993, I promised him that working to save the unborn from abortion would permeate everything I do, and throughout my ministry, it has.

Cardinal O’Connor died on May 3, 2000, and as it happens, I was in Alabama, celebrating the daily televised Mass at the Eternal Word Television Network – better known as EWTN. I always looked at that timing as a gift from the cardinal, because I had the opportunity to share with the world about this great and humble man.

He was 80 years old when he died and he had spent 54 of those years as a priest, which he considered his primary privilege and greatest joy. As a priest, he did so much to show us the way to live the gospel of life in love, compassion, and clarity.

We need that today; the Church needs it; the pro-life movement needs it. While there are many who exemplify inspiring virtues, no one has quite filled the vacuum he left.

Father Frank Pavone is the national director of Priests for Life.