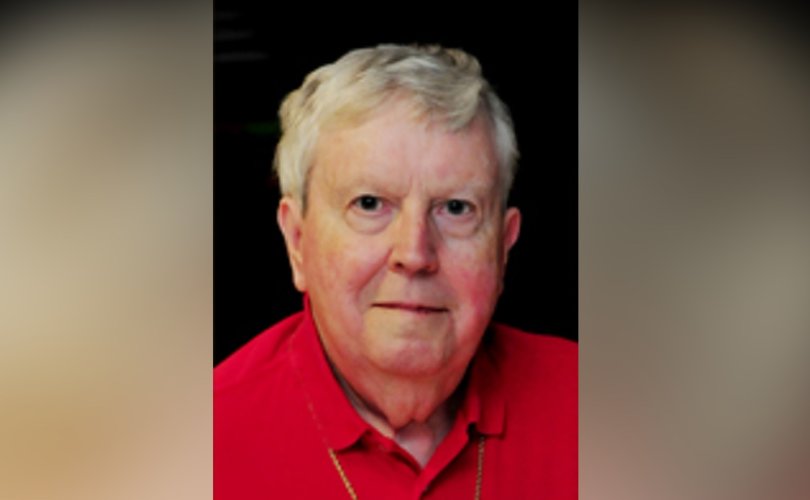 February 14, 2018 (Public Discourse) – Germain Grisez, who died on February 1, early on the eve of Candlemas, wrote the twentieth century’s most adequate, profound, creative, and faithful work of moral theology. And down to his very last days in this world he was working toward a theological book on the Last Things, a work that even in outline had the same unique combination of qualities.

But his richest talent was as a philosopher. Speaking of himself on the website he painstakingly constructed over the last decade—a resource set up to endure, complete with a short autobiography, a full and explanatory bibliography, a republication of virtually all his printed and some valuable unprinted works, and a guide to the life and work of more than a dozen of those he counted as his personal colleagues—he rightly says: “in 1978, his understanding of his commitment compelled him to become a theologian but enabled him to do so without ceasing to be a philosopher.”

In November 1960, early in his thirty-first year and little over a year after completing (under the formidable Richard McKeon) his University of Chicago PhD on logical theory, Grisez wrote a short but deep-going paper on “The Four Meanings of ‘Christian Philosophy.’” What he there wrote about the first and fourth of these meanings says much of what a truthful obituary needs to say of him, nearly six decades later, when he had in wonderful measure fulfilled what he had long before envisaged as the good to which, and for which, he should commit himself.

The first of his meanings of “Christian philosophy” focuses on the philosophers themselves, those who

having good will . . . see . . . that their diverse commitments conceal an implicit unity, for one and all they are committed to a reality which lies outside their proper and peculiar interests and beyond their clear vision and grasp. Hence they tolerate diversity of [overarching] commitment . . . because they accept it as a significant and common evil toward whose elimination they must co-operate, using themselves in the service of that one reality beyond interest, in which their diverse explicit commitments implicitly unite.

He continues, about philosophers of this kind:

Among these . . . some appear pre-eminent over the rest in their extraordinary intellectual competence and activity, in their detachment from both technicalities and vulgar concerns, in their universality of interest, in their indifference to praise and condemnation, in their magnanimity, in their fairness to collaborators and critics, in their sagacity in appreciating the common human predicament, and in their determination to unfold their commitments to the point where their hidden community can appear in reality . . .

And that, we can now see, was Grisez’s preeminence, achieved and maintained over many decades even if not widely recognized. Having delineated other characteristics of such philosophers, including that “they know well their limitations,” he concluded his portrait of them in this way:

such as these deserve the title “philosopher” . . .  and the title will be qualified by the denominations of commitment—for example, they will call John Henry Newman “a Christian philosopher.” The qualification does not diminish the title, nor is it a mere extrinsic addition to it . . .

His outward productions, his utterances and writings, are not what such a philosopher hopes mainly to accomplish, but in so far as those works are relic of his life they will be called after him, “Christian philosophy.”

Then his account of the fourth, complementary meaning of “Christian philosophy” focused not on the philosopher so much as on philosophical inquiry’s outcome:

We may call a philosophy “Christian” in itself—and denominate its author “a Christian philosopher” from it—inasmuch as that philosophy has the truth that it has in itself at the end of an analysis which is intrinsically related to a Christian’s wonder—wonder that initiated the inquiry preceding the analysis—wonder upon the worlds of which we find ourselves a part: the world of nature signed by the Creator’s hand; the world of truth illumined by the Light of man; and the world of value sanctified by the Love that abides within.

The whole of Grisez’s account of this sense of Christian philosophy repays study, not least as—implicitly if not unconsciously, but certainly not exclusively—an exploration of the shape that philosophic wonder first takes in a cradle Catholic educated by a warmly believing household; and then of the place of audacious questioning in a Christian faith firmly held for love of God and—more and more dominant in Grisez’s developing understanding and theology—in hope for God’s Kingdom.

In arranging his works for his website, Grisez wrote that his professional commitment “insofar as he was both a philosopher and a believing Catholic” was articulated more in his 1966 paper “The Christian Philosopher,” and that in it he had spelled out “the understanding of the relationship between nature and grace that would remain, though be more fully articulated, in his later works;” and had “made clear the sort of Thomist he would be: one who would begin from Thomas but depart from him insofar as evidence and reasons required.” As the paper put it,

Each philosopher must ultimately judge these demands, using his sources of evidence and his reason. He cannot avoid final responsibility for his own judgment, because he has no philosophic superior.

A main conclusion of the 1966 paper was that “the Christian philosopher’s primary aim” should be to do pure “speculative philosophy—first philosophy, pure metaphysics.” Then: “a secondary, but by no means incidental concern, should be the work of ethics.”

But the exigencies of teaching and the crisis of the times meant that Grisez’s first two books, though fundamentally philosophical and certainly not theological, were on ethics: Contraception and the Natural Law (1964), and Abortion: The Myths, the Realities and the Arguments (1970). The critical and historical (and in the latter case also scientific, medical, and legal) parts of each book are of permanent value, but the constructive ethical arguments, especially of the former, have been superseded by Grisez’s later work showing why the firm Christian judgment, from the beginnings of Christianity, that choices of such kinds are opposed both to reason and to revelation is entirely sound.

The essential work in pure metaphysics was done by Grisez in his book on the existence of God, published in 1975 as Beyond the New Theism: A Philosophy of Religion and republished in 2005 with a valuable additional ten-page preface and the more suitable title God? A Philosophical Preface to Faith (St Augustine’s Press, South Bend, Indiana).

The other book Grisez wrote on metaphysics is a first example of his preference for collaborative philosophical work, Free Choice: A Self-Referential Argument(Notre Dame UP 1977), written in 1973-75 with Joseph Boyle and Olaf Tollefsen (most able former doctoral students of his). The upshot of these two books is that Grisez’s natural law ethics is the most metaphysically well-grounded of all ethical theories of modern times.

Collaborative large-scale philosophical works followed even after Grisez’s vocational turn to theology in 1978 (a turn made needful by the absence of serious work responsive to Vatican II’s call for theologians to prioritize moral theology, and by the ever-growing infidelity of theologians, not least moral theologians). Life and Death with Liberty and Justice: A Contribution to the Euthanasia Debate, written with Joseph Boyle immediately before that turn, parallels the book on abortion in its ambition to attend to facts, political theory, and law as well as to ethical foundations and judgments; Grisez’s explanation of its supersession by later work of his accompanies the website version.

Nuclear Deterrence, Morality and Realism (Oxford UP 1987), lists me and Joseph Boyle as lead authors but was mostly written by the three of us together in Germain’s office at Mount St Mary’s College, Maryland—a remarkable, unreproducible experience made possible by his matchless analytical and synthesizing powers of grasping and formulating what most matters, and then of planning, outlining, and composing by dictating. As events transpired, the book was a year or two too late to have the impact needed, but it remains unrefuted and as painfully relevant as ever.

My own collaboration with Grisez began in 1974, when we drafted the four central chapters on morals in Lawler, Wuerl, and Lawler, The Teachings of Christ: A Catholic Catechism for Adults. My work with him extended (in very subordinate ways and varying degrees) through the three published volumes of his great The Way of the Lord Jesus—Christian Moral Principles (1983), Living a Christian Life (1993), and Difficult Moral Questions (1997). Organizing and chairing open seminars with him at Oxford University and Boston College in 1994-1995 on a number of those 200 difficult questions, I could observe firsthand what intellectual luxuries he had sacrificed, without complaint, in choosing to spend decades teaching seminary students rather than advanced students of philosophy.

The extent and something of the topics and domains of our work together have been described by Grisez with characteristic precision. Our last collaborative writing is the Open Letter to Pope Francis of November 2016, about eight positions fostered if not taught by Amoris Laetitia and contrary to the Christian faith. Of these errors, the most important—long antedating that Apostolic Exhortation and contributing greatly to the accelerating decline of Catholicism that (mutilating or ignoring the teachings of the Council) began in the years between Grisez’s two early papers on Christian philosophy—is the eighth: the comfortable thought that “A Catholic need not believe that many human beings will end in hell.” Our discussion of it culminates in these words, close to the center of Grisez’s concern over many decades:

Confidently expecting heaven and no longer fearing hell, one reasonably assumes that nothing one does or fails to do is likely to make any difference to what will happen to oneself, one’s loved ones, or anyone else after death. Without a kingdom that must be sought, there no longer is any reason for non-Christians to repent and believe, and Jesus’ exhortation to seek first the Father’s “kingdom and his righteousness” (Mt 6:33; cf. Lk 12:31) no longer evokes the theological hope unsullied by presumption that alone can motivate Christians to live their faith in love, to try to form their children in its practice, and to promote others’ salvation.

The attached footnote there cites the published fruits of Grisez’s collaboration with Fr. Peter Ryan, SJ, on the kingdom of God, a project thoroughly outlined but uncompleted at Grisez’s death.

Our final work together was our participation just before Christmas 2017 at a two-day consultation in Princeton with a dozen or so of those who deploy or actively explore the philosophical approach to ethics that Grisez and then I pursued, partly independently, partly in collaboration (visible or invisible), over the years since I chanced in December 1965 upon his Contraception and the Natural Law.

Although advanced in the progressive physical illness that he knew was terminal, Germain was in command of intellectual powers and attainments I do not expect to see matched in this life. They were powers and attainment fired, as they always had been in my acquaintance with him, by a glowing magma of Christian faith, faith that he had the privilege of not only adhering to by rational, critical judgment but also experiencing, with Christian hope to match. The emotions adding their motivation to his reason’s faith and hope could—as ever with Germain—momentarily shake or melt his voice, but not his intellect’s steel and will, nor his gentleness with interlocutors in search of light and explanation.

For his help and companionship, God be thanked; and let us pray for his admission to heaven’s full light and society.

Reprinted with permission from Public Discourse.