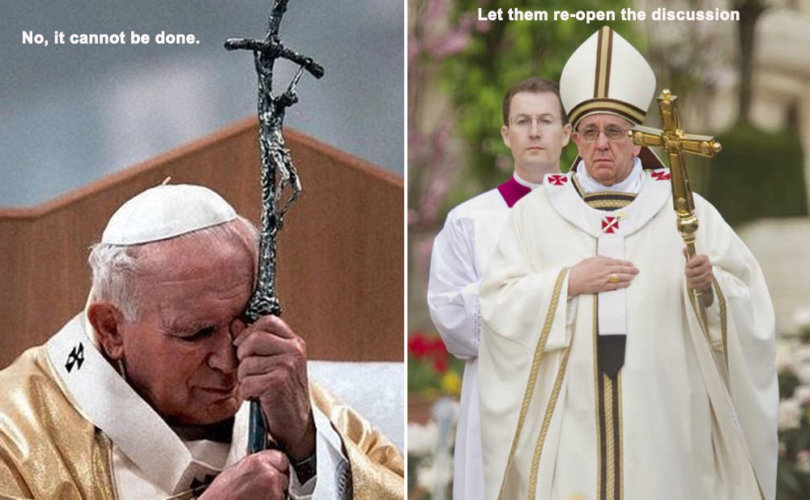 February 13, 2017 (CatholicCulture.org) – La Civilta Cattolica has published an essay by its deputy editor, Father Giancarlo Pani, which seeks to reopen the possibility of ordaining women to the priesthood. This journal, published by the Jesuits but vetted by the Vatican Secretariat of State, has long been a means of communicating lines of thought which reigning popes consider important. Therefore, the kindest way to describe this particular article is “peculiar”. It is, in fact, peculiar in at least three serious ways: politically, administratively, and theologically.

When I say “politically peculiar”, I am applying the idea of political correctness to the Church. The question here is what sort of “political atmosphere” prevails in the Vatican under Pope Francis. What viewpoints do the subtle clues of the powerful indicate are open for discussion, and what viewpoints are discouraged to the point of exiling those who articulate them? We already know, for example, that it is considered very good form to lament the “rigidity” of all who choose to emphasize that adherence to Catholic doctrine and moral teaching is required of us by Jesus Christ.

This consideration of the “political atmosphere” is relevant to La Civilta Cattolica because of its unique status. Since its establishment in Rome in 1850, the journal has served as a kind of unofficial voice of the Holy See. It is the only periodical in the world for which each issue is examined and revised as needed by Vatican personnel, and each issue must be approved prior to publication. At the very least, then, the current understanding within the Vatican is that challenging established Catholic teaching is not frowned upon. Such challenges are not the kind of thing that gets a writer into trouble.

Given what has happened with the question of reception of Communion by those who are divorced and remarried without an annulment, the latter possibility certainly comes to mind. Pope Francis has clearly encouraged the conclusion that reception of Communion should be possible in some cases after a period of careful discernment, and yet he did not actually go that far in his official text (Amoris Laetitia), nor has he issued a revision to Canon Law, which directly prohibits this privately-encouraged practice. Strategic use of La Civilta Cattolica is another way to encourage ideas and practices which the Holy Spirit would never permit a pope to specify magisterially. It is impossible not to imagine that this is part of an unfortunate pattern.

This possibility of papal approval is rendered even stronger by the Pope’s strong commendation of the editorial staff of Civilta Cattolica immediately following the publication of the article which questioned the permanence of the Church’s teaching that women cannot be priests. Among other things, Francis told the staff that their journal “continues courageously to navigate open waters”, counseling that Catholics should “never be afraid of open waters, and must never seek the shelter of safe harbors.” The Pope deliberately emphasized this point: “You above all, as Jesuits: avoid clinging to certainties and security.”

One can wiggle around to suggest that the Pope must surely be referring only to the danger of clinging to mere human opinions. But Francis speaks in these terms so broadly and frequently that we can only wonder if the Church herself, not to mention her members, has somehow lost her ability to distinguish what is Divinely permanent in the Christian dispensation from transitory human interpretations. Are we really so wrong, for example, to cling to the certainty of the Resurrection of Jesus Christ?

Surely a moment’s reflections enables us to see that attempting to reopen the question of the ordination of women is peculiar in one more way: It is “theologically peculiar”, and that is putting it very mildly. This is so because of the deliberately-intended definitive manner in which Pope St. John Paul II settled this question—clearly once and for all—in his 1994 Apostolic Letter, Ordinatio Sacerdotalis. After a brief discussion of the topic in three numbered sections, the Pope stated his conclusion in No. 4, which I will quote in its entirety:

4. Although the teaching that priestly ordination is to be reserved to men alone has been preserved by the constant and universal Tradition of the Church and firmly taught by the Magisterium in its more recent documents, at the present time in some places it is nonetheless considered still open to debate, or the Church’s judgment that women are not to be admitted to ordination is considered to have a merely disciplinary force.

It is simply not possible for the Magisterium to speak more clearly than that. In fact Pope Francis himself seemed to say as much during the in-flight interview following his visit to Sweden: “As for the ordination of women in the Catholic Church, the last clear word was given by Saint John Paul II, and this holds.”

It is telling that Fr. Pani, in suggesting a reopening of the question, gave as his reason what he described as tensions between the Church’s teaching and the work of theologians. At the risk of slipping down a rabbit hole, this grows curiouser and curiouser. Peculiar in the extreme, this perpetuates a false view of theology that was developed by dissident theologians during the twentieth-century, and still affects huge numbers of academic theologians today. We absolutely must shake out of our woolly heads the notion that the task of theologians is to reflect on cultural changes as if they can discern in them new and changed fundamental truths of the Faith.

In reality it is impossible for a theologian who understands the nature of his discipline to find that his theological perceptions put him at odds with the teaching of the Church. Each discipline has its own proper subject matter and methods. The subject matter proper to theology is Divine Revelation, which is expressed and clarified only in Scripture, Tradition, and the Magisterium of the Church, all of which are guaranteed free from error by the Holy Spirit. Thus it is the role of the Catholic theologian to seek to penetrate the meaning of Revelation ever more fully, explaining it with greater depth and more precise understanding as study continues over time.

There can never be a legitimate tension between the Church’s teaching and the work of theologians, for the simple reason that the Church’s teaching is part of the theological data which the theologian seeks to understand. Theology is always faith seeking understanding through the study of Revelation. Apart from that, theologians have no subject matter, and so there can be no discipline called “theology” at all. In this case, the implicit Modernism of the author comes through clearly, as it always does in writings of this type, in the complaint that the CDF statement in 1995, which reminded us that Pope John Paul II’s teaching was definitive, “does not take into account the developments that the presence of woman in the family and in society have undergone in the 21st century.”

But these cultural developments, whether good or bad, are not the data of theology at all. What they are is a source of additional questions which theologians may need to address more clearly based on renewed study of the revealed data with new concerns in mind. In fact, Pope St. John Paul II did this himself in Ordinatio Sacerdotalis. In considering exactly this sort of question, arising precisely from cultural issues which had in fact long since come to the fore, John Paul wrote:

Furthermore, the fact that the Blessed Virgin Mary, Mother of God and Mother of the Church, received neither the mission proper to the Apostles nor the ministerial priesthood clearly shows that the non-admission of women to priestly ordination cannot mean that women are of lesser dignity, nor can it be construed as discrimination against them. Rather, it is to be seen as the faithful observance of a plan to be ascribed to the wisdom of the Lord of the universe. [3]

That, my friends, is an exercise in theology, and it is a great trial in our time that so many of those who play a role in clarifying Catholic doctrine lack even a basic understanding of what it means to master so sublime a discipline. This effort to extract changes in Catholic doctrine from cultural trends has always been a sure sign that a theologian submits his mind not to Christ and the Church, but to the spirit of the age. Theology without fidelity to Revelation is not theology at all.

Finally, I am saddened once again to see evidence that Pope Francis does not believe it to be a significant part of his responsibility as the Vicar of Christ to protect the faithful against whatever weakens their trust in the permanence of the teachings of the Catholic Church. Too often, Francis even suggests the opposite—that this trust is actually misplaced. We need to remember that when Our Lord rebuked the Pharisees, he did not speak about their “rigidity” generally, but rather about their unvarying commitment to the wrong things, by which he meant their worldly ways of thinking:

And he said to them: “Well did Isaiah prophesy of you hypocrites, as it is written, ‘This people honors me with their lips, but their heart is far from me; in vain do they worship me, teaching as doctrines the precepts of men.’ You leave the commandment of God, and hold fast the tradition of men.” [Mk 7:6-8]

These words of Jesus Christ are directly applicable to La Civilta Cattolica’s faulty approach to the ordination of women as priests. To make the point even more strongly, here is what Christ in glory told St. John to convey to the Church in the third chapter of the Book of Revelation: “I am coming soon; hold fast what you have, so that no one may seize your crown.”

Jeffrey Mirus holds a Ph.D. in intellectual history from Princeton University. A co-founder of Christendom College, he also pioneered Catholic Internet services. He is the founder of Trinity Communications and CatholicCulture.org. See full bio.

The Catholic Church can never ordain women priests, so why all the confusing signals?