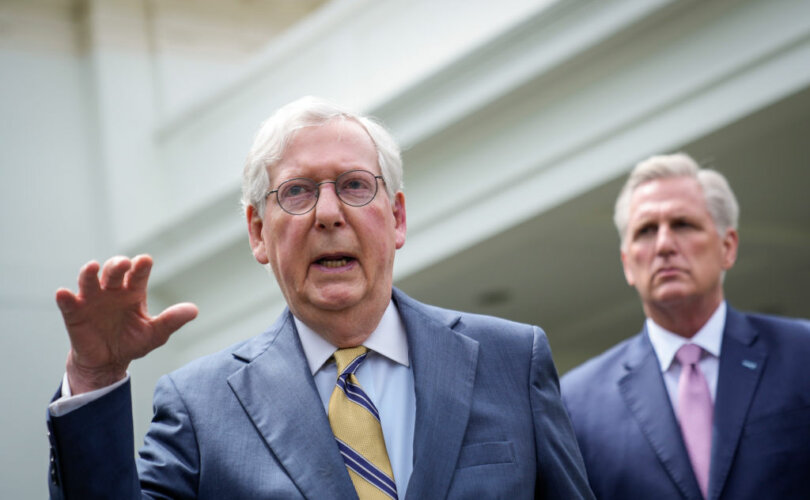 (WND News Center) – It is all too likely our Republican leaders will betray us once again and will turn our November 8 victory into a defeat.

It is all too likely we will once again suffer the “death of a thousand cuts” at the hands of our leadership – bleeding away the impact of electoral success and draining the life from our great movement.

Sen. Mitch McConnell (R–KY) will likely hold GOP leadership in the Senate; who can stop him? He likely will be erroneously credited with the success of new MAGA Republican senators – even though he fought against the election of most of them.

Even though his leadership is uninspired and uninspiring. Even though more often than not he uses his power in opposition to both conservative and America First principles. Even though he betrays his base with clock-like regularity.

It is more than likely Republicans will also impose upon themselves a second defeat – by electing Kevin McCarthy as speaker of the House.

McCarthy, too, will wrongly be credited with the Republicans’ victory this fall, despite his Herculean efforts to prevent the election of any Republican not loyal to him.

The existing and newly crowned MAGA candidates will likely not achieve numbers sufficient to unseat McCarthy. Once again we will be saddled with an ineffectual and inarticulate Republican leader, one already long compromised by his donors. McCarthy will persist, however, absent courage, absent vision, and absent the wisdom to promote the America First ideas of his new colleagues.

Our current leadership’s betrayal, however, exceeds the limits of their own incompetence. They continue to fail to make Democratic malefactors pay a price for their fraud and deceit. No Democratic apparatchik or pawn has suffered even a whisper of a consequence – no jail time, no fines, no impoverishing protracted legal battles. Contrast this with the cruelty visited upon the hapless Trump supporter.

But our leaders do not notice. They do not harangue our tormenters. Most do not seem to care.

It is true Republican leaders have commented upon the evil embedded in the heart of Democratic politics, if only briefly, but they have yet to act upon their words. Admittedly, there are a few senators and House members who speak out more forcefully, but our leaders smother most such efforts and punish them as well.

Our leaders do not fight for us, their party, or their voters.

Worst of all, our leadership continues in silence, affirming by neglect the Regime’s illegal political imprisonment – still – of dozens of January 6 protesters.

Instead, our leaders have distracted themselves with support for the bloated so-called “infrastructure” bill, doubled down on ruinous, inflationary and unnecessary COVID and stimulus spending, and – even now – funnel precious billions into the proxy war in Ukraine, serving the interests of no one but themselves and their defense industry paymasters.

More than failing us, our leaders have failed – and betrayed – a nation. Their execrable disdain for exploring the nationwide fraud in the 2020 election has forestalled any hope of building sufficient fraud-prevention measures for this coming election.

Our leaders’ failure to hold Democratic miscreants to account for their fraud emboldens Democrats to defraud us again – but this time bald-facedly and despite our newfound army of poll observers.

Can we ultimately prevail, even with a midterm victory, subordinated as we are to a feckless and self-destructive leadership, and despite the ravaging of our base by every institution in America?

Reason alone would predict we cannot and would caution us to despair of any meaningful or consequential victory on November 8 – even if we elect an unlimited number Republicans to the House and Senate. Because even a profound victory for Republicans will be squandered by our leadership – poked and prodded until nothing of value remains.

But… this is America. This is the land of miracles, where even the powerless can become the mighty. So, even though our adversaries own almost everything, we own reason and we have “The People.”

And that should be enough.

Consider also our inheritance: America’s founders fought for and won independence – and against all odds. Their ragtag gaggle of farmers with muskets defeated the largest, best-equipped, and best-trained military in the world.

And out of this miracle they created another: a nation of free citizens, a constitutional republic of yeomen, and a nation Abraham Lincoln would later claim to be “the last best hope of earth.”

We can still save it – and we can do so despite our failed leadership.