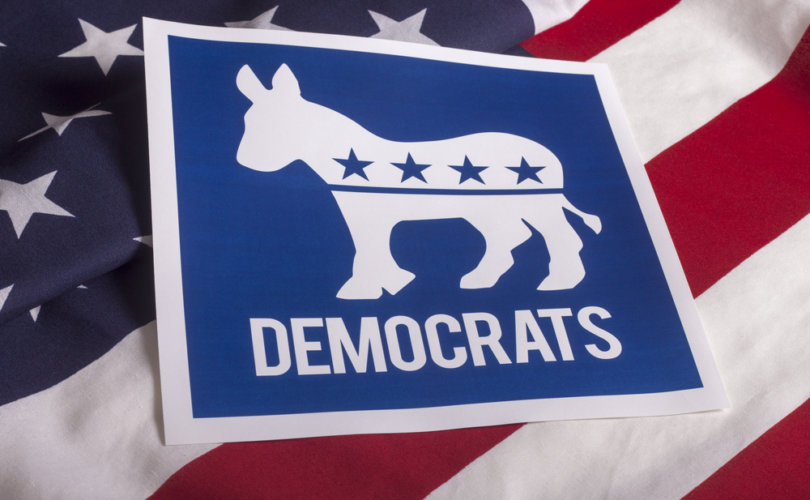 (LifeSiteNews) — Jackie Speier has been a fixture of the California political scene for more than 40 years.

So much so that in the three decades preceding her first election to Congress in a special race to replace the late Tom Lantos in 2008, there was seldom a cycle that didn’t feature Speier’s name on the ballot in the San Francisco/San Mateo County area.

Before making a name for herself, though, Speier was an aide to Congressman Leo Ryan, a fellow Democrat often identified as her mentor, who infamously led a delegation to “Jonestown” in Guyana to investigate the Peoples Temple, the notorious religious cult led by Jim Jones, in 1978. Ryan, along with five others, was tragically shot and killed upon attempting to flee the commune.

Speier was a member of Ryan’s team on that fateful trip, and sustained five gunshot wounds herself, living to tell the tale and pursue her own career in politics thereafter, serving first on the San Mateo Board of Supervisors, then in the State Assembly as both an assemblywoman and senator.

The U.S. House district she currently represents (CA-14) is safe Democrat territory; Speier won all ten of her terms with no less than 75% of the vote.

And yet, just this week, Jackie Speier confirmed that her current term would be her last.

“It’s time for me to come home,” she announced in a video posted to her Twitter account on Tuesday, “time for me to be more than a weekend wife, mother, and friend.”

For all intents and purposes, this was an out-of-the-left-field decision from the Congresswoman.

Even with census-mandated redistricting leading to California’s loss of a House seat, Speier is clearly at no risk of losing her own, especially considering that Democrats effectively have complete control over redrawing the map.

Knowing this, it’s tempting to rationalize her announcement with a simple attribution to age: Speier will be 72 at the end this Congress.

But at a time when more and more politicians seem to be hanging on to their jobs like the Pope does to the papacy, this theory begins to fall by the wayside. After all, the current Speaker of the House is an octogenarian, herself, and the sitting president of the United States turns 79 tomorrow.

So what, exactly, is going on with Jackie Speier?

To find a satisfactory answer, you’d be best served asking the same question of more than a dozen of her Democrat colleagues who, just under a year out from the midterms, have already decided to throw in the towel themselves.

On Monday, Vermont’s Patrick Leahy, currently the longest serving member of the U.S. Senate, confirmed that he, too, would opt against seeking another term in 2022. Just yesterday, North Carolina Congressman G.K. Butterfield, a former chairman and prominent member of the Congressional Black Caucus, announced his own retirement.

If he’d chosen to run, Leahy would’ve been a shoo-in for a ninth term in the deep blue Mountain State. Butterfield, on the other hand, would’ve at best faced a toss-up race in the redrawn NC-02 district, which is set to become significantly more favorable to Republicans under the new congressional map.

The differences don’t end there. In fact, one would be hard-pressed to identify any notable commonalities between the 17 congressional Democrats planning to retire in 2022.

The list is made up of multiple male and female lawmakers. They represent every race, color, and creed, and hail from blue states, swing states, and red states alike. Some have been noted for moderate voting patterns, while others have openly embraced the hardcore left. They range in age from 37 to 85, and their tenures in office clock as far back as 1975 and as recently as 2019.

But regardless, the one condition that ties these Democrats, even with a 2022 win under their belts, is that none of them yearn to return to minority status in their respective chambers, and with recent forecasts predicting that Republicans could gain as many as 70 seats in the House alone, it seems likelier than ever that Democrats’ days in power on Capitol Hill are numbered.

Likewise, Glenn Youngkin’s upset victory in Virginia, where the Republican governor-elect improved upon President Trump’s vote totals in all 95 of the state’s counties, overperformed in traditionally blue areas, and even won back the suburbs, has sounded the alarm for Pelosi’s and Schumer’s caucuses, many members of which face the conundrum of either (a) running and losing in competitive districts, or (b) securing a victory but being relegated to minority party status and stripped of the power perks that come with it.

Republicans have also put them on notice. Congressman Tom Emmer, the chairman of the National Republican Congressional Committee (NRCC), warned that “[i]n a cycle like this, no Democrat is safe” upon releasing a list of 13 new targeted districts, most of which are in blue-leaning and suburban rich territories, just one day after the 2021 election.

These, in addition to the 57 Democrats originally announced by the NRCC, bring the GOP’s own docket of targeted districts to a whopping 70, with, potentially, room to grow. But the real message Republicans are trying to send?

“Retire or lose,” as Emmer stated bluntly in a recent interview with the Washington Post.

Faced with this imminent threat, members are beginning to take heed, and with Democrat leaders bracing for an onslaught of even more retirement announcements — perhaps even before year’s end — the party’s already uphill battle to retain their majorities may be a much tougher slog than they’d originally bargained for.

As Joe Biden’s popularity continues to sink further and further (Quinnipiac has his approval at a dismal 36%) and Republicans begin to lead on generic congressional ballots, it appears that Democrat’s big-spending, high-inflation, unfettered-abortion, pro-indoctrination, anti-medical freedom agenda just isn’t resonating like they thought it would.

And with retirements abundant and destined to keep pouring in, it would seem that (some) Democrats have gained enough self-awareness to recognize that they’re losing. It remains to be seen, however, whether they’ve become mindful enough to actually understand why.