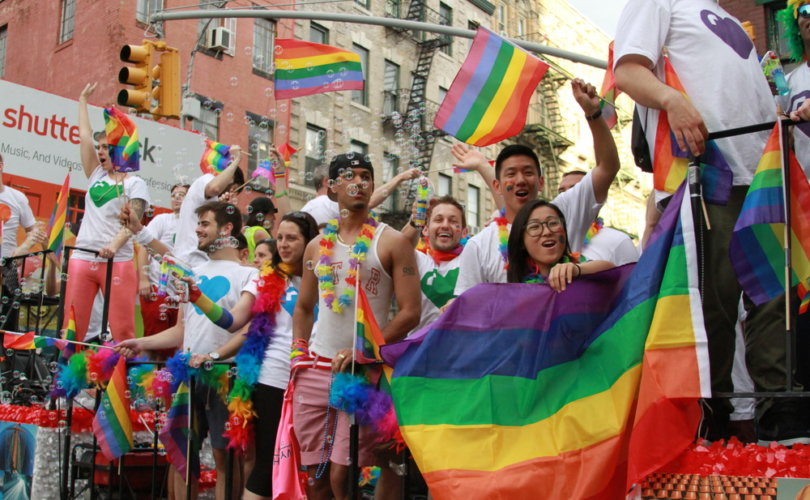 Once an action has been advanced in the name of a sexual minority, can it be undone, or does progress have a built-in ratchet effect?

The former president said in one of his numerous parting statements that he didn’t think the legal and social achievements of sexual minorities during his administration “will be reversible. American society has changed and the attitudes of young people have changed.”

He has stated the problem for conservatives neatly enough.

Can America, can Western civilization, be moved back, or is the best that can be hoped for by conservatives a kind of ratchet effect? We can stop the juggernaut of sexual permissiveness from rolling on when we control the state, but when the other side gets its turn, it will take another irreversible revolution toward total permissiveness.

Is the best we can do is fight a delaying action, like the band of heroes in C.S. Lewis’ The Last Battle, the final book in the Chronicles of Narnia? Is that the best Christians can hope for — gold in heaven?

Obviously, it is the best we can hope for, but it is not all we should strive for. The rewards for fighting the good fight here in Canada and America are the souls of future generations saved from sexual sin and the lives preserved from the physical and psychological ruination that flow from that sin. The pro-life movement fights for the flesh-and-blood lives of unborn children and the soul of our nations. It’s big.

But is it doable? Or is Obama right? Are social changes irreversible? History teaches that it is tough but not impossible to buck social trends. These days, social change is achieved through big spending – grants paid out not only by the likes of left/progressive George Soros, but by left/progressive Barack Obama.

Now at least one of those fonts of funding should dry up.

In fact, the whole LGBT promotional effort of the U.S. Justice and State Departments ought to dry up now, thanks especially to the voting choices of evangelical Christians.

Conservative Christians have already demonstrated the LGBT agenda is resistible. Many states have pushed back at the softest spot in the left/liberal advance, with washroom laws to protect female modesty and safety, and with religious freedom protection laws that push back against of  homosexual privilege and intolerance.

Equatorial Africa is pushing back too against Obama’s LGBT diplomatic initiative. But even before that, Uganda famously pushed back against the AIDS establishment’s evangelization of condoms and sexual permissiveness as the answer to that fatal STD.

Our information on the AIDS establishment comes from public health expert Edward Green, the former head of Harvard’s AIDS Prevention Research project, who in 2010 famously said Pope Benedict was right about condoms not helping Africa.

Because AIDS spread first and fastest among male homosexuals, Green reports, the NGOs and government agencies that sprang up to fight it recruited their leadership from the homosexual community.

This group adamantly defended their multi-partner, promiscuous mores as a big part of their identity. They cited flimsy empirical evidence showing that people’s sexual behavior could not be changed. So it was not only immoral to ask homosexuals to limit their sexual activity, it was ineffective. Condoms were the only solution because they wouldn’t cramp anyone’s sexual style.

But before the party line was imposed, actual homosexuals in places like Vancouver did change their behavior — and did reduce their infection rate. And in AIDS-stricken Uganda, the churches, mosques and government devised the ABC campaign that pushed Abstinence before marriage, Being faithful in marriage, and using Condoms only as a last resort. It succeeded in changing public behavior and ending the AIDS epidemic.

In the end, the AIDS establishment pressured Uganda into backpedaling with the predictable result of an increased infection rate. But the story teaches two lessons: first, the truth can prevail over lies; and second, in this fallen world, the truth will prevail only with the utmost effort.

One way to think of homosexuality is as an addiction, and one way to think of addiction is that it is the result of seeking to satisfy a natural, God-given need in the wrong way. The real need is for the lifelong and life-bestowing fellowship of marriage. Attempts to satisfy that need with casual sex are doomed to be unsatisfied, which is why they keep going back for more.

Obama’s message of irreversible LGBT “gains” is mirrored in the claims that addiction is incurable. An addictions specialist, Californian Robert Weiss, came to my hometown to talk about sex addiction and emphatically asserted that once the production of an addictive product had reached industrial scale, it was unstoppable at a social level. (But individual therapy or self-help groups could work).

This is manifestly false. Cigarette smoking is the obvious example of a mass-produced, addictive product whose influence has been severely curtailed by public policy. Rampant drunkenness was also successfully addressed. Though it is often argued that Prohibition failed, or that it only encouraged the rise of organized crime, it  did stop the excessive drinking by the working poor in Canada and the U.S.

Two hundred years earlier, Great Britain’s urban underclass and its industrial poor were soaked in gin, the first industrial-scale liquor. Like sex on the Internet and like cigarettes, mass-produced gin was so cheap anyone could afford it.

What defeated gin was the Great Awakening, a Christian revival that replaced a false spirit with a true one. Many upper-class Britons were moved by the Holy Spirit to campaign for a wide-ranging reformation of behavior and of laws. William Wilberforce is the best-known exemplar of this movement, but he championed not only the abolition of slavery but the relief of chimney sweeps and prostitutes and the humane treatment of animals. He sat on the boards of more than a hundred charities devoted to improving the lives of the poor.

The power of facts to change people’s attitudes is exactly what our common sense tells us. In 2012, a team of German scholars used social media to try to change people’s opinions and found that negative facts were particularly effective. Their study was titled Reversal of Attitude: The Influence of Counter-Attitudinal Information.

We are going to need all the elements found in the reformation of British society in the 18th and 19th centuries – faith, facts, fervor – if we have any hope of changing the direction of our culture away from sexual libertinism. But to overturn a general bias in favor of individual freedom, we are going to have to lead with facts: the facts about STDs, the facts about parenting outcomes of same-sex couples, the facts about homosexual-on-homosexual violence.

Yet the truth won’t be enough. As Christians, we know this. In the short and long runs, our actions must be linked to compassion. Until and unless we can manage to tell the truth without it impairing our love for those who have fallen into the LGBT lifestyles – and until and unless we can express love for members of the LGBT communities without it preventing us from telling the truth about how mistaken they are – we don’t have a hope.

With all those pieces in play, we can reverse much.